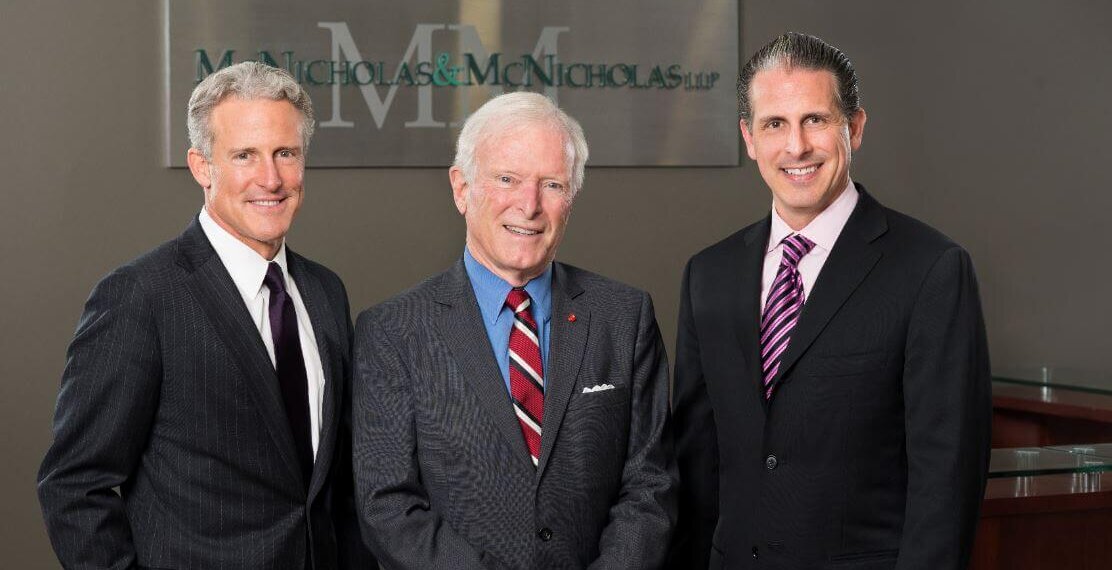 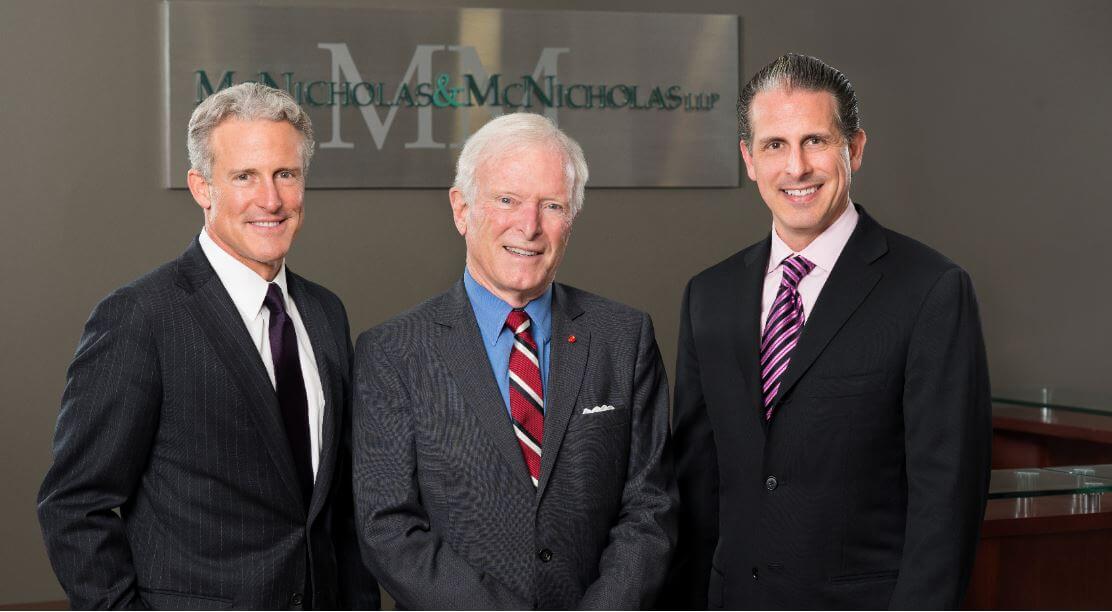 “Not only do we enjoy working together as a family, but we all respect one another as truly great attorneys who are constantly advocating for our clients,” says Patrick McNicholas, partner at McNicholas & McNicholas LLP, a plaintiffs’ trial law firm based in Los Angeles.

The firm partners are John McNicholas and his two sons, Patrick and Matthew. Their sister Courtney McNicholas works with the firm on select cases as well.

Founded in 1993 by John and Patrick as a small practice serving clients in Southern California, the firm now has 13 attorneys with clients throughout the United States. McNicholas & McNicholas has tried more than 150 trials to verdict and has secured more than $600 million in results on behalf of clients. The firm has received some of the largest results in the history of California in their practice areas. Further, the firm prides itself on partnering and co-counseling with attorneys throughout the city, state and county and has paid more than $50 million in referrals and joint venture fees.

Patrick McNicholas says, “We’re emblematic of the legal profession in Los Angeles because our family has been practicing here for so long and we’ve developed a winning reputation through our case results. Because of the way we have been raised we have tremendous respect for the legal profession, the legal process, opposing counsel, the judiciary and everything in between. When you look at the civil and legal process as being a collaborative one, it tends to produce a better and more efficient result.”

His father inspired a respect for the law and the legal profession for his children. “I grew up in a legal family and my dad primarily represented insurance companies, although he did do a smattering of plaintiff work. I remember one of his most rewarding experiences he told us was representing the families of the victims of those who perished in the Paris air crash. That was when I realized how powerful, important and emotionally satisfying the practice of law can be.”

His contributions to the legal community do not end in the courtroom. He takes tremendous pride in his role as a trial advocate, supporting numerous charities and providing mentorship for not only his sons, but the succeeding generations of lawyers. As a Loyola Law School alumnus, John endows a partial scholarship for students showing the highest level of legal acumen, which is awarded annually to one student. In addition to tuition assistance, the scholarship provides the awardee a fulltime, paid position at the firm as a summer scholar wherein they participate in all facets of case preparation.

Patrick McNicholas has more than 25 years of experience as a trial lawyer and is behind some of the most sensitive and challenging legal cases – from horrific plane crashes, to deadly school shootings, to child sexual abuse cases. In the last year alone, he filed a wrongful death lawsuit on behalf of the families of the three victims of the deadly UCSB school shooting; a governmental claim against Los Angeles County for failing to properly administer and allocate billions of dollars of property tax revenue to county trauma centers; and nine separate class actions against heavy mall staples for failing to properly pay “oncall” employees.

“Becoming a lawyer was more of an implicit process rather than an explicit one. There are seven kids in our family and three of us became lawyers. I just think we didn’t know anything else. I was a political science major and I figured ‘what am I going to do with that? Be a government worker? Teach at a university?’ The law was a better choice,” he says.

More recently, he filed lawsuits against Southern California Gas Company and Sempra Energy on behalf of three separate families for the health issues allegedly caused by the widely publicized toxic gas leak in the Porter Ranch neighborhood in California.

Patrick McNicholas says, “I always tell my younger brother that he’s the older brother I never had. Matt is 12 years younger than I am, but he’s far more serious and far more analytical than I am so our styles complement each other extremely well. I’m more of a big picture, thematic person. I see reoccurring themes and patterns in trials and I look at that and try to match that with the best possible jury that would be receptive to the message in the case.”

“Our goal is to be the best plaintiff lawyers in Los Angeles. We want to deliver the best possible legal product while being respectful of our clients, our opponents and the process. We’re not only trial attorneys; we’re advocates and counselors who can see the big picture while at the same time managing the smallest details,” Patrick Mc- Nicholas says.

One example Patrick recalls is Damianakes v. the City of Los Angeles, which was an employment law case in which he represented a female metro police officer attempting to become the first female SWAT team officer for the Los Angeles Police Department. “We brought a lawsuit against the city of Los Angeles for gender discrimination. This particular case garnered a significant amount of media attention and, fortunately, it worked to our advantage,” because a number of national media outlets wanted to document the trial process. One of those outlets produced a documentary on the trial.

“It was an interesting process and particularly rewarding when the trial was aired on national television as a human interest story. And after a complex and lengthy trial, we obtained a favorable $2.3 million verdict on her behalf,” he says.

“The most satisfying part of trial work is when you take a case to trial on behalf of a client who has gone through a horrific experience, and you are able to achieve some sense of justice for them, some sense that they can move forward with their lives, and some sense that there’s a societal recognition that a wrong has been righted,” he says.

While in his 20s, Patrick McNicholas handled Cummings v. White, a case in which a woman had lost her leg as a result of medical malpractice. He had handled malpractice cases before, but he had never tried one. The case was against an orthopedic surgeon in Orange County who was very well known and respected. “By all accounts this looked like a difficult case, not because it didn’t have merits, but because of the psychology of suing a well-known orthopedic surgeon. My client was well into her 80s, and although the monetary amount wasn’t large due to the Medical Injury Compensation Reform Act of 1975, she still prevailed in court. It was significant because she was able to live the rest of her life in comfort and dignity. That to me, is the real victory,” he says.

The firm represented a rodbuster, a person who works with iron and rebar and who is a member of a union, in Gray v. Saxon. “A load of metal dropped on our client, crushed his thigh and permanently disabled him. The insurance carrier in that case insisted that the man only suffered a broken leg and therefore his case didn’t have the value being sought. Here you have a large powerful organization telling a worker that the impact on his life was insignificant and therefore didn’t rise to the level of being a life-changing event. It was.” With a nearly $11 million verdict, Patrick Mc- Nicholas says he felt particularly vindicated by the jury’s decision that the accident did destroy his client’s life, since he could never go back to living the way he had been before the accident.

He believes the best part of being a plaintiff lawyer is working directly with a client and being able to make a positive change in his or her life. As a result of that process, he says the benefit to society is tremendous. “When you’re able to bring a successful products liability case, it acts like a brake on the system so that manufacturers understand that it’s to their economic benefit to make a safe product. In class action cases, you can hold a corporation responsible. In a consumer fraud case, the individual benefit may be small but the impact to the corporation is huge. We keep larger, more powerful institutions honest and allow average citizens to have a voice and affect that change.”

In 2005, Patrick McNicholas co-founded Urban Compass, a nonprofit organization whose mission is to serve Watts, one of the lowest-income neighborhoods in Los Angeles, and formulate programs targeted at troubled and at-risk youth. “We went to one of the most difficult neighborhoods in the country and were able to find dedicated volunteers to create an organization that has not only been supportive of the community that it’s in, but it is also a model that can be replicated easily throughout the state and the country,” he says. “We’re giving these children an alternative to a lot of negative influences they’re exposed to. And it’s been very successful.”

Partners John, Patrick and Matthew McNicholas are all fellows of the American College of Trial Lawyers, an invitation- only organization whose fellowship is limited to 1 percent of attorneys in each state. They are the only family with three concurrent members, with Matthew being the youngest member in the college nationally. They are also active members of the American Board of Trial Advocates, an organization composed of trial lawyers who have seen a minimum number of jury trials to verdict. In addition, John is a fellow of the International Academy of Trial Lawyers, an invitation-only organization limited to 500 lawyers.

Serving clients, the community and the profession is all part of a day’s work, Patrick McNicholas says. “We’ve been in business for such a long time and built a solid reputation on over two decades of professionalism, teamwork and dedication to our clients. We have a great group of people and a methodology that makes it easy day in and day out to smooth over any bumps and makes it fun to practice.”