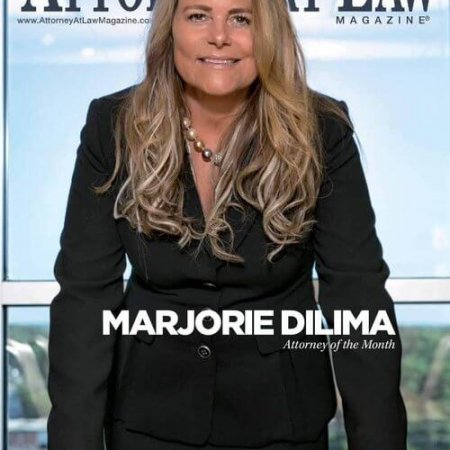 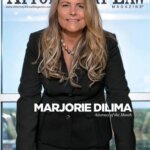 Marjorie is certified in collaborative law, a process of collaborative divorce as an alternative to litigation. Marjorie is also a Certified Mediator for all family law issues, including custody and financial matters, and serves as a Best Interest Attorney for minor children.

Marjorie has received several honors for her work, including being named August 2019 Attorney of the Month for the “Attorney At Law Magazine” where she was featured on the cover and within the magazine. Marjorie has received lifetime recognition from the Metropolitan Who’s Who Registry for her outstanding leadership and achievement in her profession. She has been named a Maryland Super Lawyer for 2010, 2015 through 2019, she was elected a Fellow of the Maryland Bar Foundation for her outstanding dedication to the welfare of her community, the administration of justice, and the traditions of the profession of law. In 2006, Marjorie was inducted into the Montgomery County Maryland Bar Foundation as a Bar Leader, and has received the Montgomery County, Maryland Bar Foundation Award for her Extraordinary Commitment to the Delivery of Legal Services in 1999, 2001, and 2003.

In 2006, Marjorie accomplished a lifelong goal by running the Marine Corps Marathon while raising money for AIDS research. In 2007, Marjorie raised money for the Leukemia and Lymphoma Society (Team in Training) and ran the Marine Corps Marathon for a second time. Currently, Marjorie continues to run for exercise and charity. For example she ran in the 2016 Across the Bay 10K. Marjorie frequently participated in Rolling Thunder on her Harley Davidson and provided motorcycle escorts for soldiers from Walter Reed in her commitment to support veterans and active duty military and their families. She now has her second therapy dog (in training) that she hopes to take to visit the veterans, hospitals, and institutions.

Marjorie began her career as a solo practitioner from which she built a healthy practice and hundreds of professional relationships. Marjorie was recruited by Fait & Wise, LLP and became an associate in the firm in January, 2003. In June 2006, Marjorie became the Managing Partner of Fait & DiLima, LLP. Marjorie has proved a committed member of our team, focused on providing our clients with the best of her considerable knowledge and expertise and has continued to build the practice and increase our professional relationships. Marjorie has concentrated a portion of her practice on issues arising from alcohol and drug abuse in the family.

As a Montgomery County and Frederick County family lawyer, Marjorie maintains an appellate practice, arguing cases in the Maryland Court of Special Appeals. She has been instrumental in brief preparation for many cases of the firm, two of which have been reported opinions: Richard v. Richards, 166 Md. App. 263, 888 A.2d 364 (2005), regarding monetary awards, determination of marital versus non-marital property, and equitable distribution; and Mills v. Mills, 178 Md. App. 728, 943 A.2d 677 (2008), regarding the revisory power of the Court pertaining to Qualified Domestic Relations Orders.

4 Lies You Believe About Prenups

Enforcing Child Support During a Pandemic

4 Emotions You Can Expect to Feel During Your Divorce

The Talk: Tips for Communicating with Your Kids About Divorce

From a legal standpoint, getting married is often far easier than getting divorced. Between ensuring that there is an equitable division of property, determining parenting time, dividing retirement accounts, and other formalities, the process of divorce can be both expensive and time-consuming. While many people can, and do, undertake this process without an Washington DC divorce attorney, there are a number of specific items involved that can use an divorce attorney’s legal experience.

Washington DC Divorce attorneys fall into a legal practice area known as family law. Family law is focused on assisting individuals with legal matters pertaining to family relationships. In addition to divorce, family law also covers annulment, child custody and visitation, as well as adoption. Some of the reasons people seek the help of an experienced Washington DC divorce attorney include:

What clients in Washington D.C. are saying about
Marjorie G. DiLima

Receiving lifetime recognition from the Metropolitan Who's Who Registry