Big Brothers Big Sisters Of the Triangle: “Someone I can Trust” 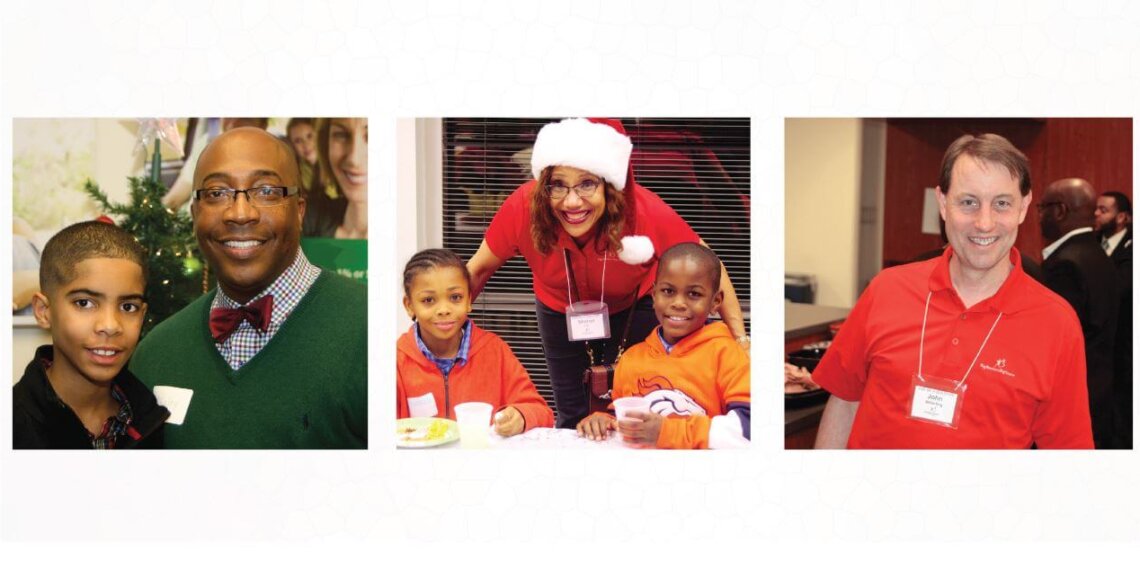 McKinley Wooten, deputy director of the NC Administrative Office of the Courts, dashed out of his Raleigh office on a rainy December evening. He drove to Holly Springs to pick up his little brother, 12-year-old Michael, and bring him back to the Big Brothers Big Sisters of the Triangle (BBBST) annual holiday party.

“I enjoy being a role model for Michael. I want to be there to support him academically, socially and all the other ways a big brother should do,” said Wooten, a father of two, who has been Michael’s “Big” for two years.

Michael is one of 600+ children ages 6-18 being served by Big Brothers Big Sisters in Durham, Orange and Wake counties. “We can’t keep up with the number of parents who are requesting a mentor for their children,” said Big Brothers Big Sisters of the Triangle’s chief development officer John Mitterling. “We need more mentors – especially men – and funding that enables us to make the matches.” Budget cuts of government funding have recently cost BBBST roughly $400,000, approximately 25 percent of their annual income. The organization now must make up that funding from individuals and corporations, so they are very interested in getting law firms on board as corporate sponsors.

Matches are based on the mutual interests of the Big and the Little, determined after surveys and interviews. Child safety and protection is a number one priority for the organization, so BBBST makes sure the mentors are trained before matching them up. Bigs receive training before being matched with their Little. Training includes a two-hour orientation at the headquarters office in Morrisville, approximately three hours of online training through the Big Brothers Big Sisters of America web portal, and post training sessions, available at least four times a year, both in person and online, which run about one-two hours each. Each match is supported by a professional staff member – a match support specialis – who provides guidance and training throughout the course of the match to ensure that the match goes well.

When mentors volunteer, they sign up for a one-year commitment to spend onetwo hours a week with their Littles. They may visit a park or museum, have a meal together, or attend sporting events, movies, concerts, or performances with free tickets provided by sponsors. Sometimes mentors may simply help their Littles with their school work. “We encourage the mentors to do things that don’t cost money,” said Mitterling. Often the relationship grows beyond the minimum requirements and extends further into the child’s life. “The important thing is just for them to spend quality time together.”

BBBST is looking to increase the involvement of attorneys as Bigs, contributors or board members. An upcoming fundraising event is their annual Bowl For-Kids’-Sake, at which law firms can sponsor attorney teams to bowl for 90 minutes at The Alley in Raleigh or Village Lanes in Durham Saturday, Feb. 28. Attorneys and their staff members can sign up online or they can call John Mitterling at (919) 850-9772, extension 103.

“Lawyers are great role models and are committed to giving back to the community. When they sign up to be mentors, we know we can count on them,” said Mitterling. “We often hear from parents that mentors have made a real difference in the future of their child who is at a crossroads, and our Bigs report that they feel they get as much or more out of the relationship as their Littles.”

Wooten spends about eight hours a month with Michael, usually playing basketball and attending sporting events. “I’ve made this one of my life’s priorities, so I find the time to do it,” said Wooten.

“He’s like a friend, someone I can trust,” said Michael.