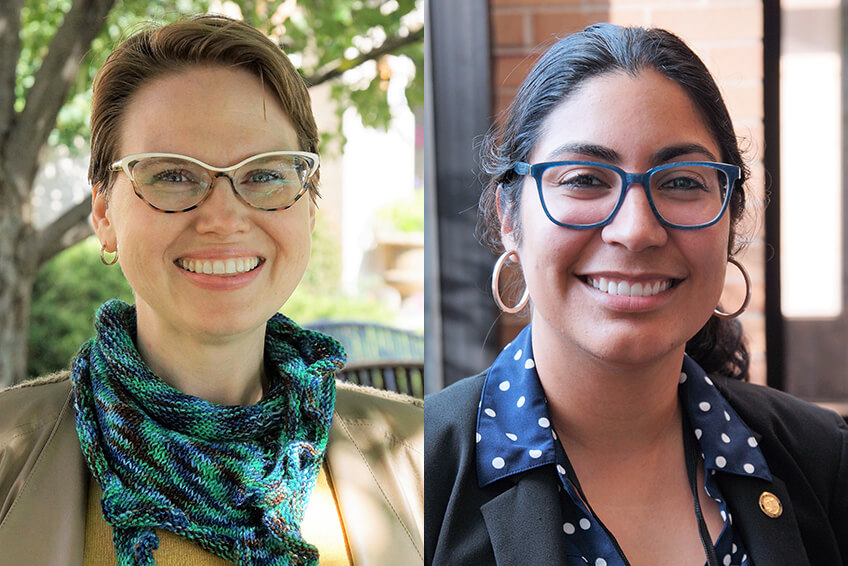 Kari Beaudry and Jacqueline Pena are getting a unique on-the-job experience this fall, one that’s only available to students at Mitchell Hamline School of Law.

Beaudry and Pena are taking part in semester-long residencies with the Minnesota Supreme Court.

The residencies aren’t your typical internships for law students; they’re essentially full-time clerk positions. The students are earning a semester’s worth of law school credits while doing research and writing memos for the justices.

They’re also getting a behind-the-scenes look at how the court operates, how justices form their decisions, and how attorneys argue cases in front of the state’s highest court.

“I wanted something that could challenge me,” said Pena, who grew up in the San Francisco Bay Area and moved to the Twin Cities a few years ago. A student in Mitchell Hamline’s part-time program, Pena has worked with Minnesota Supreme Court Justices David Lillehaug and Paul Thissen during her residency.

The experience has given her a real-world look at the law, something she doesn’t think she could have gotten just by studying in a classroom. “I think there’s no better way to learn how to do something than by doing it,” she said.

Pena is two or three semesters away from graduating, but she’s already thinking about applying for a clerkship job when she gets her Juris Doctor something she wouldn’t have considered before the residency.

“This has opened new ideas for me,” she said.

For Beaudry, the state Supreme Court residency is helping her “forge her own path” toward a career in public interest law. Beaudry taught in St. Paul for a decade before starting law school. So far, she’s found her experience teaching English and her passion for writing has come in handy working for the court.

“I love being able to research and go more in-depth in areas of the law,” Beaudry said.

Beaudry hopes to someday work in child protection, an area championed by one of the judges she works with – Justice Anne McKeig.

The push to start the Supreme Court residency program actually came from McKeig, a 1992 graduate of Hamline University School of Law, a predecessor to Mitchell Hamline.

“It’s been really remarkable for both sides,” she said.

The first student resident clerked for McKeig during the spring semester. Joshua Weichsel, a 2018 graduate of Mitchell Hamline, now works as a law clerk at the Minnesota Court of Appeals for Judge Carol Hooten.

McKeig says the residency program is a great way for law students to gain work experience, but it also allows the justices a chance to give assistance and mentorship to law students about to embark on a career.

“Every one of us who got someplace in our career got a helping hand from many people,” McKeig said. “We can put a hand down for somebody else and help bring them up. It’s our responsibility and obligation because we want strong, ethical, intelligent, hardworking, and moral lawyers in this country.”

We can put a hand down for somebody else and help bring them up. It’s our responsibility and obligation because we want strong, ethical, intelligent, hardworking, and moral lawyers in this country.”

Rick Petry, Mitchell Hamline’s assistant director of career and professional development, says the advantages of the residency program for law students are obvious, but Petry wants organizations to know there are advantages for them as well.

“When graduates arrive at a law firm, or start working for a judge, or inside a business organization, they show up far better prepared than if they hadn’t had this kind of an opportunity,” Petry said.

The Minnesota Supreme Court isn’t the only place where Mitchell Hamline has residencies in place. Students have also had semester-long stints with the Minnesota Vikings and 3M, and the program is expanding. Dozens of corporations, law firms, government organizations, and courts have expressed an interest in hosting a resident, and more are always welcome, Petry says. Tim Post