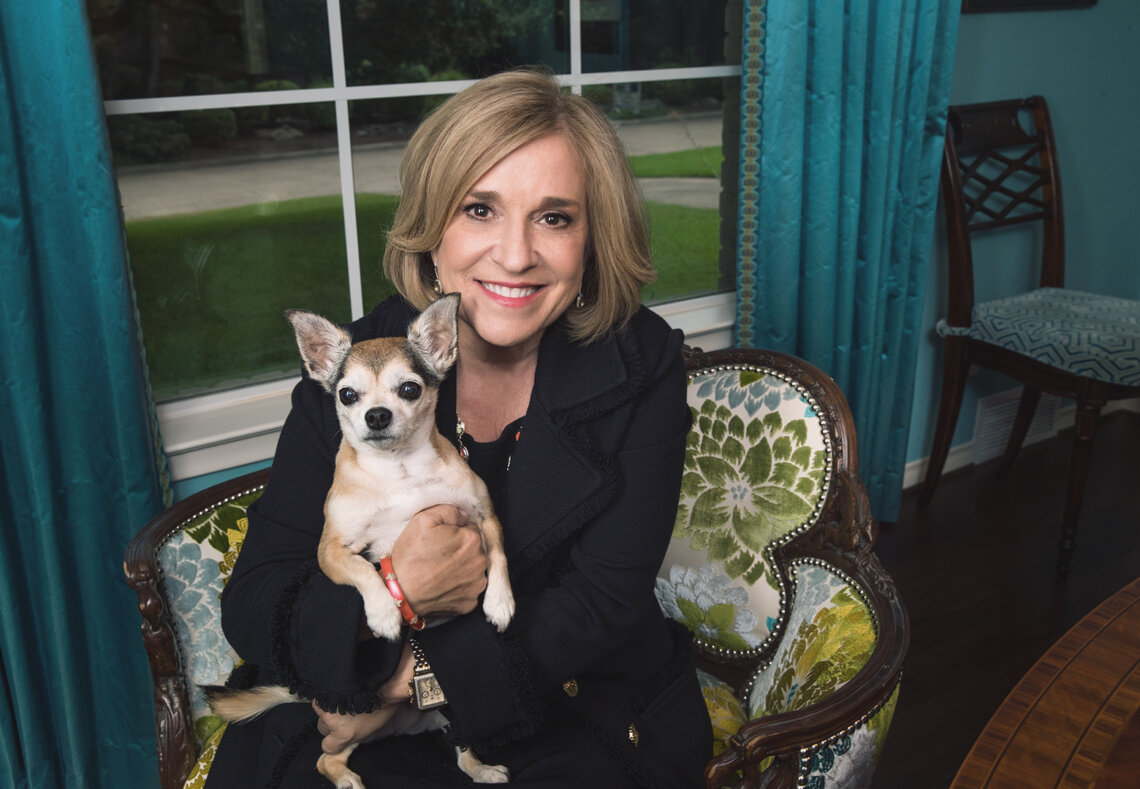 “I am a small person (5’0”) but it never occurred to me that I was too small, too female, too average or anything else to put a limit on what I could achieve. I always had the fight and the will to succeed. If I had stopped working long enough to wonder if I was big enough, smart enough, or tough enough I wouldn’t have attained some of my accomplishments,” says Kay Van Wey, Board Certified Personal Injury Trial Lawyer, Patient Safety Advocate, and founder of Van Wey, Presby & Williams, Trial Law Firm.

“I’d like to be an encouragement to other lawyers who didn’t graduate at the top of their class and weren’t on Law Review and weren’t courted by the ‘silk stocking’ firms. When you set high goals for yourself and you pursue them vigorously, you can’t be stopped. I know because I really had to claw my way up,” she says.

“Up” includes national recognition for her work in medical malpractice including facing Christopher Duntsch, the infamous “Dr. Death.”

The case began when a client came in with an incredible story of what had happened to her when seeking relief from back pain. She had gone for treatment to a young neurosugeon, Duntsch, who unbeknowst to her, had numerous personal problems, including drug addition, alcoholism and mental issues.

The woman was supposed to have had two vertebrae fused and linked by a metal plate. A second doctor brought in for corrective surgery was so alarmed by what he saw that he thought Duntsch was an imposter because no one who had a basic understanding of anatomy would place spinal hardware in the muscles around her spine. The findings were alarming. The nerve root had been severed, her spine was pockmarked with screw holes, and a screw had been lodged in another nerve root near the bottom of her spine.

Van Wey was one of the primary lawyers who sued Dr. Duntsch. She discovered that instead of having his hospital privileges stripped and being reported to the Texas Medical Board and the National Practitioner Data Bank, he was allowed to leave one facility and move on to the next. Despite the very low odds of prevailing against the hospitals, Van Wey took the cases on. “I couldn’t sit back and watch this horror show unfold before my very eyes without doing something.” Ultimately, justice was served when Duntsch was given a life sentence. Van Wey appeared in local and national news media (including an appearance on the Dr. Oz show) and on a podcast that eventually reached 50 million people.

Van Wey continues to raise concerns about patient safety and how some hospitals are protecting dangerous doctors instead of patients. But the problems are not just with impaired surgeons. She cites a few cases to emphasize her point: a young man who was victim of a decimal error by a nurse and received a lethal dose of medication; a pair of hemostats left in a patient’s abdomen after a surgery; doctors operating on the wrong side of the patient’s body; surgical fires – not in the operating room, but on and in the patient. Duntsch was not the first impaired spine surgeon she ever sued. Many years ago, she represented nine people who were “butchered” by their spine surgeon here in Dallas/Ft. Worth by a doctor who had a cocaine problem. The hospital he worked at continued to let him perform surgeries even though they suspected him of drug abuse. When finally called in for a hair sample drug test, he showed up with not a single hair on his body.

“I have the highest regard for doctors, nurses and people working in hospitals, but I’m a patient and everybody I love is a patient. We cannot allow the healthcare industry to make such an alarmingly high number of preventable errors. Things have got to change. I am just one attorney, but I refuse to turn my head and look away from such a long-term and ongoing healthcare problem,” Van Wey says.

Van Wey credits much of her drive to achieve from parental example. “My parents were driven, creative, hard-working and ambitious people. We were big fish in a small pond, but I didn’t know the difference,” she says.

Her father, Jim Van Wey, was a small-town General Motors dealer known as The Thrifty Dutchman through his television advertising. His tagline was “cars are like eggs, they’re cheaper in the country.” Her mother founded the Lawton Civic Ballet Company and Van Wey grew up “consumed” with ballet. She fondly remembers performing with her sisters in The Nutcracker, choreographed by her mother.

Van Wey knew that she would become an attorney as far back as her sophomore year in high school. She was the first female Student Body president at her high school in Lawton, Oklahoma. Her advocacy skills were ignited when she made the debate team. “I didn’t make the pom pom team and at the time I was crushed. But in retrospect that was a fortunate event because I was able to tap into the things that I had some natural talent for. I can’t say the same for pom poms.”

The drive took her to law school where she knew after her first class in torts that she wanted to become a personal injury attorney. After her first year in law school, she earned an internship with a famous Oklahoma City medical malpractice attorney and then interned at the Oklahoma County District Attorney’s office. Going into her second year at law school she knew she wanted to be a medical malpractice lawyer. That was always the dream. After law school, Van Wey worked in the District of Columbia for a Texas congressman before moving back to Lawton, OK, to work in the District Attorney’s Office. She tried more than 30 cases in less than two years.

“I didn’t believe a large or prestigious law firm would hire me. I was not at the top of my class. I wasn’t in law review. Even when I didn’t think I would have been hired, I wasn’t about to let that stop or ever slow me down,” she says.

Two Lawton attorneys brought her into private practice. Van Wey didn’t have her own book of business so she went around door-to-door and asked lawyers to send her their criminal court appointments. As a result, she was in trial all the time. “That’s where I learned to be a trial attorney. I realized that there might be more opportunity for me if I were to move to a bigger city, so I packed up my courage, moved to Dallas and started over to accomplish my dream of becoming a medical malpractice attorney. I knew to get there, I needed a lot of both, trial and personal injury experience.” She says.

When she started her first law firm in 1995, she had a law partner, one secretary and a handful of car wreck cases. Van Wey left to form her own firm in 2010. “I had my own vision of what I wanted my firm to stand for. I wanted to lead with a heart for helping people.”

Van Wey is not a micro-manager. “I want people to enjoy working for me and have such pride in the firm and to feel a sense of responsibility for the firm and the firm’s clients that they would never dream of doing anything less than their best work because they are invested in the mission of the firm and the people we are trying to help.”

The firm employs 20 people and she recently added two partners. Ellen Presby, who has more than three decades of litigation experience and serves as a lead trial attorney for personal injury, products liability and pharmaceutical cases. Brady D. Williams has more than a decade of experience in medical malpractice and mass torts.

Van Wey says one of the firm’s key advantages is its deep bench. “There is me, my experience, track record and work ethic, but I’ve worked hard in recent years to develop a team. I am not shy about aligning myself with people who are better at certain things than me. I am very proud of my law partners. They are excellent lawyers and great people.”

Life balance and being a mother and a spouse and not give in to the constant pull of the industry to be all-consuming is a significant factor in Van Wey’s lifestyle. Trying to be present for her children, trying to get home to cook dinner, to help them with their homework, to carving out time for exercise is important. “I try and be aware of ‘moments’ that are fleeting and work my schedule around those moments, such as not scheduling out of town depositions when one son is playing football and the other is playing trumpet in the band.” Van Wey is married to Stephanie Sammons, a certified financial planner with her own firm. She says, “Steph, who is a singer/songwriter, blogger and podcaster helped me find and strengthen my voice to speak out about injustice.” When they aren’t working, they devote spending time with family, travelling and doing “mountain stuff ”, such as hiking, biking, skiing and snowboarding.

She has two boys she adopted from Russia when they were 13 months and three and a half years old. “I was 45 years old when I became a mother. That’s my highest purpose in life – raising these boys, nurturing these boys, molding them into wonderful young men. They are now 19 and 16. They are such a joy to me,” she says.

She is in her third-year teaching Law and Medicine at SMU. “This is one of my favorite things to do. I love teaching and I feel it has made me a better lawyer,” she says.

Van Wey says she keeps herself motivated because she has found her “why.” “My ‘why’ is helping people. I pride myself in standing up for what I believe is right and in defending the little guy. I guess I am some evidence that one small person can make a difference through hard work and determination.”