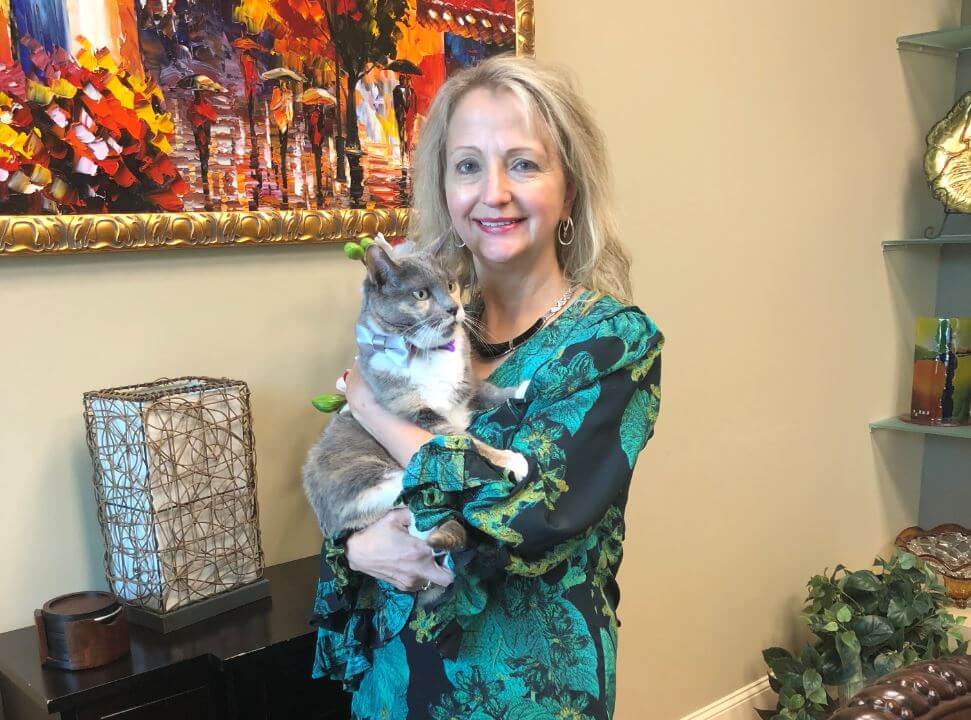 Raleigh attorney Laurie Bergfeldt Gengo is a huge Dan Aykroyd fan. When the former SNL star and actor did a surprise visit at Shawbucks restaurant in Jamestown, New York this summer, Gengo and her sister, Wendy Cartledge, snuck in the back door to meet him she recalled with a giggle. “He was very approachable and patient and let everyone who managed to fit in the restaurant meet him. He even signed my Triangle Law Group Business Card”.

Aykroyd and Gengo were both in her hometown of Jamestown in August for the grand opening of the National Comedy Center. Triangle Law Group, Gengo’s law firm, is one of the Center’s sponsors.

Jamestown was once a vibrant community based around a thriving furniture manufacturing industry. But as those factories moved south or overseas, the town withered.

Lucille Ball was from a tiny town near Jamestown called Celeron and had dreamed of opening a comedy museum. “I was a huge Lucy fan growing up; she was my favorite comedian, and still is,” said Gengo.

“I wanted to do something that would help the hometown I grew up in and help see Lucille Ball’s vision come to life. One of the reasons I wanted to do this magazine article was to spread the word to bring more people back to my hometown, so we can see it continue to grow and come back.”

The Center’s website describes itself as having, “more than 50 immersive exhibits through comedy history, from early vaudeville acts to the latest viral memes. Guests can step into the shoes of comedy pros, trying their hand at cartooning, comedy writing, live stand-up, and faux pie fights—or simply cheer on their friends.”

Gengo grinned like a proud Mama as she cradled a poster touting it as, ‘one of the best museums in the country’ according to Condé Nast Traveler Magazine.

A FUNNY THING HAPPENED ON THE WAY …

In 2007, when Gengo was looking for a pet sitter, she met one of the founders of Second Chance Adoptions, Judy Benrud. Second Chance Pet Adoptions is the oldest no-kill rescue organization in Wake County. It has rescued stray or abandoned cats and dogs since 1987. It has a cat shelter in Raleigh. Dogs live in foster homes until they are adopted.

A funny thing happened on the way to the pet shelter. “We have received a lot of clients through that organization. A lot of people really appreciate that we support animal rescue. Second Chance has been a great referral source,” explained Gengo.

“People gauge whether or not they want to work with somebody based on what causes they support. It’s not easy to hire a lawyer especially if you are going to one for the first time. It’s difficult for them to come into a law firm and talk about their problem because 95% of the time they are telling personal, information to a perfect stranger,” she said.

“We let people bring their pets to their appointments. Their pet is part of their family, so we have no problem if people want to bring them into the office,” said Gengo. It puts clients at ease.

“We have people losing their homes to foreclosure, so we ask clients a lot of personal questions about their finances. They need to have a comfort level, and I think our involvement with Second Chance or anything that supports the arts and non-profits gives people a level of comfort.”

“Our firm’s success has been important for me because I’m able to donate to causes that need the help,” said Gengo. “A lot of these causes need private donations. I love to do whatever I’m able to do whether it is spreading the word about the National Comedy Center or being able to give money to Second Chance, it makes me feel very fulfilled.”