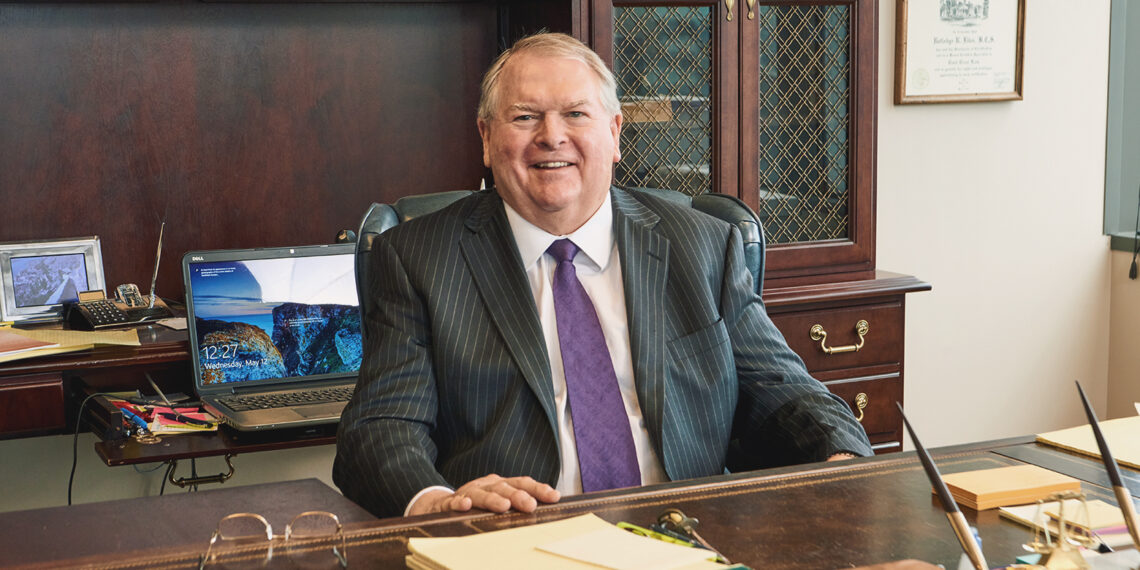 AALM: Tell us about some of your mentors.

RRL: When I was hired by Mahoney, Hadlow, Chambers & Adams, I became the associate for Gerald Bard Tjoflat. Working with Gerry, I became hooked on a trial practice. It afforded me a range of experiences and the chance to meet people from all walks of life.

No one could have asked for a better mentor than Gerry. He was unselfish with his time and even tempered, though I am sure I was a challenge. He was/is brilliant, and helped me learn the various aspects of trial work.

In 1968, Gerry was appointed to the State Circuit Court and ultimately became a judge on the United States 11th Circuit Court of Appeal, where he remains in senior status. I will always be grateful for his mentorship, and more importantly, his friendship.

When he took a seat on the bench, I became employed by Walter G. Arnold, one of the finest trial lawyers in the state. He was a perfectionist when it came to preparation, and he expected the same of me.

Under his mentorship, I learned to try cases the hard way. One Friday, he handed me a file and said I was going to try it on Monday. I was scared to death.

On one early jury trial he decided to sit behind me. It was a rather complicated commercial case. The judge was Marion Gooding (Judge David Gooding’s father). At one point, opposing counsel asked a question and I just sat there. Suddenly I felt a fist hit me right between the shoulder blades with Arnold saying in his gruff style, “Object!” I immediately stood and said, “I object, Your Honor.” Judge Gooding said, “And what are your grounds Mr. Liles.” I froze and just stood there. Finally, I said, “Your honor, I have absolutely no clue, we will have to ask Mr. Arnold.” Arnold said, “Immaterial,” which I parroted. Judge Gooding sustained my objection and the entire courtroom, including the jury laughed. I won the case, probably out of pity.

Working with Arnold was an experience of a lifetime. Many years later he asked me to represent him which, to me, was a quintessential honor.

AALM: Tell us about your decision to go on your own and those early years.

RRL:  In 1989, my old firm split. I had just completed my year as president of The Florida Bar. I wanted to change the focus of my practice and felt the best way was to be on my own. Kyle Gavin, an excellent lawyer in his own right, was my associate. I asked him to stay with me and off we went to form Law Offices of Rutledge R. Liles, P.A.

Starting over was tough. I borrowed money from my profit-sharing plan and borrowed on a line of credit. I worked seven days a week and we finally broke even. I remember telling my family that we might have to sell the house if I was unable to turn a profit and missed paychecks to make sure the employees were paid. I look back on that period with a feeling of fear and satisfaction.

AALM: How has the legal community evolved most over your career? Are these changes positive or negative?

RRL: It is a mixed bag. On the negative side, there are simply too many lawyers. Many graduate and cannot find jobs, forcing them to open a solo practice. They have no mentors to help them through tough times and answer difficult questions. I feel sorry for them.

Secondly, the garish advertising we see on television is one of the worst things that has ever happened to the organized Bar. Once upon a time, lawyers obtained cases by virtue of experience, reputation and referral. Now the public is bombarded by advertisements 24 hours a day, 7 days a week.

The law has become far more complex over time. When I began practicing in 1966, Florida Statutes consisted of two volumes and a third with the index. There are now six volumes. Consequently, the practice of law has become more complex with the necessity of specialization, which is good. We have board certification in various disciplines.

In sum, the good outweighs the bad and we do our best to service the needs of the public. Our profession will continue to evolve to meets the needs of society.

AALM: Tell us about one of the cases that most impacted your career.

RRL: The case I am the most proud of, occurred in the early 1990s. I received a call from a fellow whose wife had end stage lung disease (fibrotic lung disease) and had been given about six months to live without a lung transplant. The medical insurance plan in effect for state employees rejected their request for a lung transplant, saying it was an experimental procedure, not covered by the plan and was not authorized. Strangely, the plan covered heart transplants, kidney transplants and, ironically, a combination heart and lung transplant.

I met with the couple. He said he had appealed to a number of lawyers to take their case but couldn’t afford the retainer, much less the fee. I agreed to represent them without fee or costs. With the help of her Mayo Clinic pulmonary specialist, I contacted surgeons around the country performing lung transplants. After telling them of the situation, they agreed to work with me free of charge. I flew to St. Louis, MO and took the video deposition of one of the doctors and then flew to Albuquerque, NM and videotaped another. A third doctor in Mississippi flew at his own expense to Jacksonville and testified in person. Their testimony focused on the fact that lung transplants were not experimental but an accepted treatment procedure for fibrotic lung disease. The Mayo Clinic doctor also testified live without expense.

We had a two-day trial before an administrative law judge who ruled in our favor. She received a new lung and continued to enjoy life for a number of years. I was richly rewarded by that case; I felt I had lived up to my oath and helped someone in need.