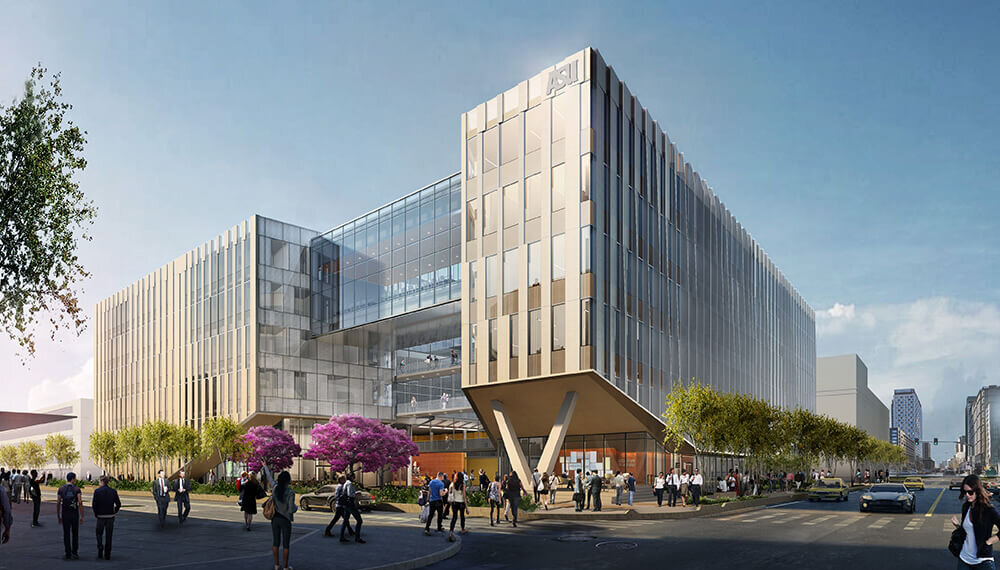 The Sandra Day O’Connor College of Law at Arizona State University (ASU Law) has had a meteoric rise in its first half-century of existence, establishing itself as one of the top-ranked law schools in the United States. In that relatively short period of time, it has surpassed many of the nation’s most prestigious institutions to become a top 27 law school in the U.S. News & World Report rankings.

ASU Law has achieved its success by leveraging the unique assets of the Phoenix metropolitan area, including one particularly precious resource: some of the most brilliant minds in the judicial branch of government. From local and federal judges to Supreme Court justices, adjunct professors from the surrounding judicial community have been a driving force behind ASU Law’s ascension.

“No law school can really hire a faculty that’s expert in everything the students will eventually be practicing, nor should they,” said longtime adjunct Judge Andrew Hurwitz, who serves on the U.S. Court of Appeals for the Ninth Circuit. “And particularly for the second- and third-year courses, where somebody decides they want to be a patent lawyer, having a patent practitioner may be the only way you can get an expert to teach a course.”

The fifth largest city in the United States, Phoenix is not only the seat of the Maricopa County government but also the nation’s most-populous state capital and home to the Sandra Day O’Connor U.S. Courthouse.

“Its access to adjunct professors is something that distinguishes it in a very positive way,” said Arizona Supreme Court Justice Clint Bolick, who will be making his adjunct debut this fall, teaching a class on constitutional law. “ASU Law takes advantage of its geographical location, especially with its new campus in Phoenix, to bring in judges and other experts on the law. And I think that enhances the learning experience for the students.”

The list of ASU Law adjuncts includes some of the biggest names in the legal community, including the school’s namesake, Sandra Day O’Connor, who co-taught a class with Arizona Supreme Court Justice Scott Bales shortly after her retirement from the U.S. Supreme Court.

Brian Richardson, a 2017 ASU Law graduate who took several classes taught by federal judges, is thankful for the close guidance and invaluable advice he received.

“Being a law student is a great time to take advantage of rare opportunities that won’t appear again for a long time,” Richardson said. “Getting to work with these judges in an academic setting is one of those opportunities. You get to know the judges and learn from them in an almost one-on-one atmosphere, since the class sizes are so small. Working on challenging issues together with them teaches you to think in a whole new way that brings what you are learning in the classroom into the context of the real world.”

Judge Patricia Norris, who retired last summer after 14 years on the Arizona Court of Appeals, attended ASU Law during its first decade and says community leadership has always been part of the school’s core mission.

“There has been a real appreciation by the law school that it should have a presence in our community, and it shouldn’t be separate and isolated,” Norris said. “It’s a state law school, therefore the taxpayers are involved and invested in the institution, and this is an institution that really gives back to the community. And in my view, that has always been true.”

Bales has been teaching as an adjunct at ASU Law for the better part of 30 years, and he says the school has fostered that collaborative relationship. “ASU Law historically has been very engaged in the community. And by that, I mean the legal community but also the broader political and business community. And I think that’s something the school embraces and will continue to do.”

Tyler Carlton, a recent ASU Law graduate, can attest to that. He took two classes taught by judicial adjuncts – Hurwitz and retired Maricopa County Superior Court Judge Colin Campbell – and said the level of engagement, and quality of instruction, was second-to-none.

“I loved having Judge Hurwitz, because he was a wealth of knowledge, and he really took the time to go beyond the material and really help us grow as lawyers,” Carlton said. “It was the same thing with Judge Campbell. It was extremely beneficial to have someone who was on the other side of the bench telling us practical advice about how to get your client the remedy they are seeking. I think having a judge as a professor is great, because they are just people who have clearly succeeded immensely as lawyers – so who best to go to for experience but the experts?”

ASU Law has a lengthy list of accomplished graduates, including business leaders, local politicians, and members of Congress. And there’s a tremendous sense of gratification when adjuncts see their former students reach such heights.

“I’ve always been grateful to the law school for letting me teach,” Hurwitz said. “I’m sure I’ve gotten more out of it than I’ve given. I enjoy it every time I do it. I end up making lifelong friends with students, some of whom are my clerks, some of whom were associates and partners in my law firm. I end up making lifelong friends with faculty members. And so it’s just been a wonderful opportunity for me.”

Richardson has taken classes taught by Hurwitz and U.S. District Judge Douglas Rayes, as well as a neuroscience research seminar taught by U.S. District Judge Roslyn Silver. He said the judges bring a wealth of experience into the classroom, which is not only educational but also entertaining.

“Judges always have the best stories,” he said. “That was always one of my favorite parts of these courses. Of course, there’s nothing like having a judge go through your writing, and seeing how much better you can be as a result of working with them.”