Olive & Olive, P.A.: Innovators are the Backbone of North Carolina 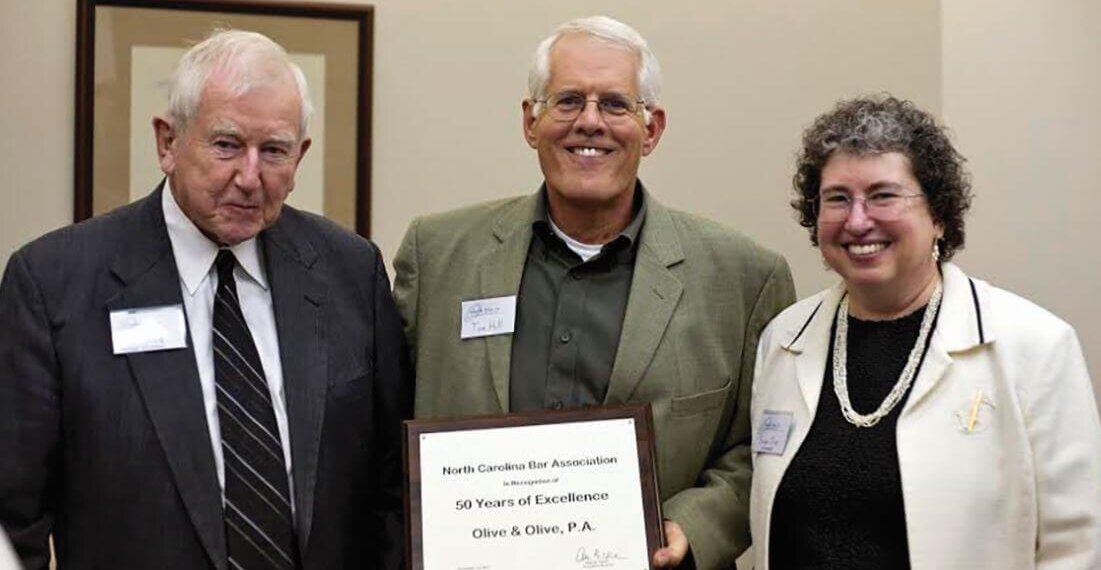 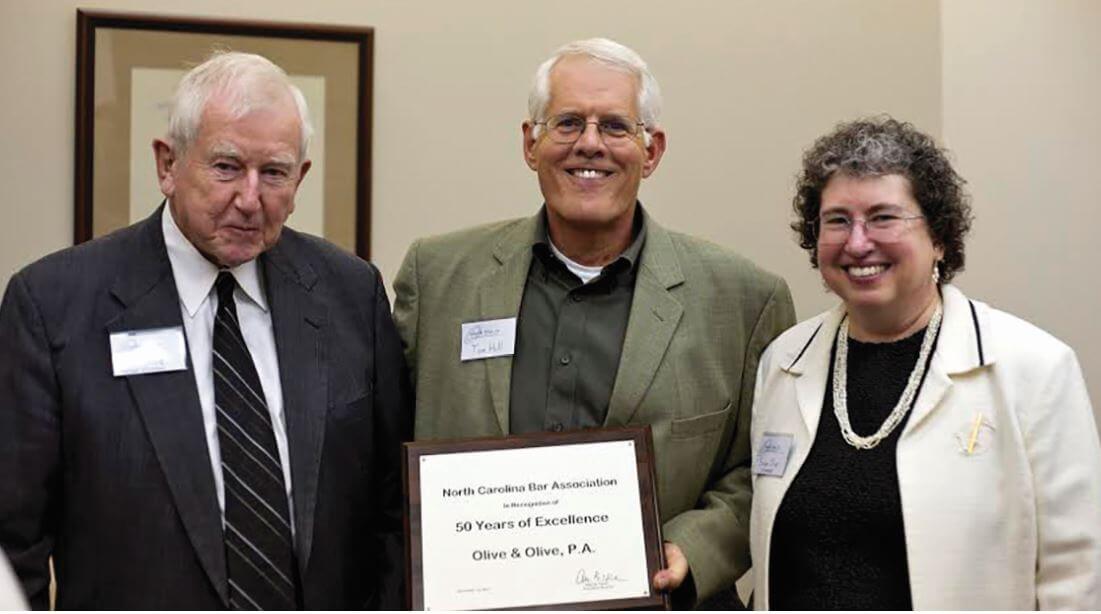 These were questions that Durham patent attorney B.B. Olive asked his daughter, Susan, at the dinner table when she was a child.

B.B. was the first private practice patent attorney in the Research Triangle Park area when the firm now known as Olive & Olive was launched in 1957. Susan followed her father into the practice after earning a bachelor’s degree at Brown University and a law degree from Duke. B.B. remained active with the firm until his death last year at the age of 93.

The firm practices exclusively in the area of intellectual property law, but the work still varies. On any given day, Olive & Olive lawyers might handle applications for inventions ranging from pharmaceutical sales and nuclear power plant operations to medical apparatus and games; protect copyrights on architectural plans, music or books; register trademarks for small or large entities; sue companies who have infringed on their clients’ rights; or defend clients against claims of infringement. Usually they are handling all of these things.

Care about Your Good Name? “For a lot of companies, trademarks are the most important assets they have: the essence of their good name,” said Olive. “We have to make sure they have chosen a name that won’t infringe on the rights of others.” Jones-Richardson, the head of the firm’s trademark group, notes that “in addition to protectability, clients want a brand that consumers will identify with, recognize and remember. Then once the mark has been adopted, they want to make sure that no one is infringing, diluting or using the brand; so that it remains the memorable brand it was intended to be.”

Got an Idea? Inventors and other innovators who are in the very earliest stages of a project are sometimes referred to Olive & Olive by large IP firms that work with later stage startups and veteran inventors. Even more are referred by their general practice and corporate counsel.

Talking to the lawyers quickly reveals the reasons for those referrals. Common comments were, “We’re happy to work with individual inventors and companies that are just starting out because we know that’s the backbone of North Carolina’s economy,” Olive said. “We have found that lawyers who send us clients like to know they’re dealing with a firm that’s been around for a long time because it gives them them the confidence that they are going to have someone to rely on well into the future. They appreciate that recommending our firm provides a sound base of experience.”

A small room just off Olive & Olive’s lobby is a mini-museum that serves as a reminder of the firm’s experience and longevity, with artifacts such as a 1950s typewriter and a 1985 “portable” computer weighing about 45 pounds.

The atmosphere at the five-attorney firm is warm, engaging and inquisitive. According to Olive, everyone from artists to computer programmers and corporate executives can feel comfortable. “It’s a perfect environment for innovation; a place where inventors can jot out ideas from a working model to an idea that is still in the inventor’s head,” Olive explained.

Olive & Olive is proud of the diversity in their firm. The woman-owned business brings insight from different genders, races and professional backgrounds. Cortina was previously the CEO of a medical software company; Jones-Richardson has worked in television and advertising as a software consultant and as an in-house counsel at Johnson Products; and, associate Jennifer Anderson is an author and jeweler.

The firm finds that, particularly with first-time inventors, it’s usually best if the inventor has prepared a model. They’ve tested what works and through their tinkering – often to their surprise – have discovered that some things they thought would work, do not.

“Sometimes, if they don’t have a model, we raise 10 or 15 different kinds of questions and send them back to do their homework. Often, they need to develop a business plan that explains how they are going to make money,” said Olive. “We’re a very practical firm; we try not to waste our clients’ resources, and we encourage them not to waste their own resources.”

Olive urges inventors to think about protecting their intellectual property earlier rather than later. “You can lose your rights by failing to get some early advice as to what you should do, when you should do it, what you have to keep secret, and what you don’t have to keep secret. For instance, if you bring in a third party to build a model of your product, or to write a computer program for you, you have to know how to deal with those subcontractors so that you and not the subcontractor own the results of the work.”

The U.S. Patent Office grants patents now to the first inventor to apply for protection in most cases, so speed can be important for that reason, too. “Often protecting an invention through patenting is the only value a startup company has and the only way to attract funding required for day-to-day operations,” Cortina said.

However, Cortina points out, an effective protection strategy does not stop with one patent, and often requires regular reviews to ensure all valuable inventions are being protected. Large companies recognize this and often have documented procedures to ensure all their inventions are considered and protected when appropriate. The firm reviews those procedures with their larger clients, and helps individuals and small companies develop similar procedures where warranted.

The exit strategy for many small startups in the Triangle is to sell their company or invention to a larger firm. “The big companies certainly will want to know the parameters of the intellectual property protection,” said Olive. “Where are the strong spots and where are the weak spots? Nothing can be perfect but the goal is to do the best you can and achieve protection that’s as strong as possible against everything else you know or can find.”

Taking Care of the Neighbors Home for Olive & Olive is, and always has been, in downtown Durham. In 1972, the firm purchased and renovated the old Durham Dairy building in what now is the Brightleaf Square area. When they grew too large for that space, they added a second floor rather than move, and ultimately added a third floor as well.

The firm is committed to Durham and its residents. Olive chairs the board of Urban Ministries of Durham. Jones-Richardson also has been active in the community for years, having served as president of the board of the Durham Arts Council and as vice president of both the Durham Library Foundation and the Durham Cultural Master Plan advisory board.

Over the last two years, Olive spearheaded a $1 million renovation of the Urban Ministries downtown shelter, including upgrades to basic facilities for the shelter’s population and space for 10 social work interns to provide case management services. “That’s nine more sets of hands helping people figure out their challenges and overcome them, so they can move out to permanent housing,” said Olive.

Effect of the Internet Half of the four million patent applications filed in the United States since the American Revolution were filed in the last 30 years. Trademarks are on a similar upward trend. That pace is likely to continue.

“As communication increases, people are better able to share information and discover the importance of protecting their information from use by others. It used to be that if you lived in Akron and you never traveled to Louisiana and you didn’t know what was happening there, you really didn’t care about Louisiana,” said Olive.

“The Internet has made it easier to infringe on copyright and trademarks, but it also made it simpler to identify possible infringements. There are computerized programs that can locate, for example, copied graphics or copied texts.”

“It’s always interesting and we are always learning,” Olive continued. “We deal with innovative people with great ideas who are hard workers.”