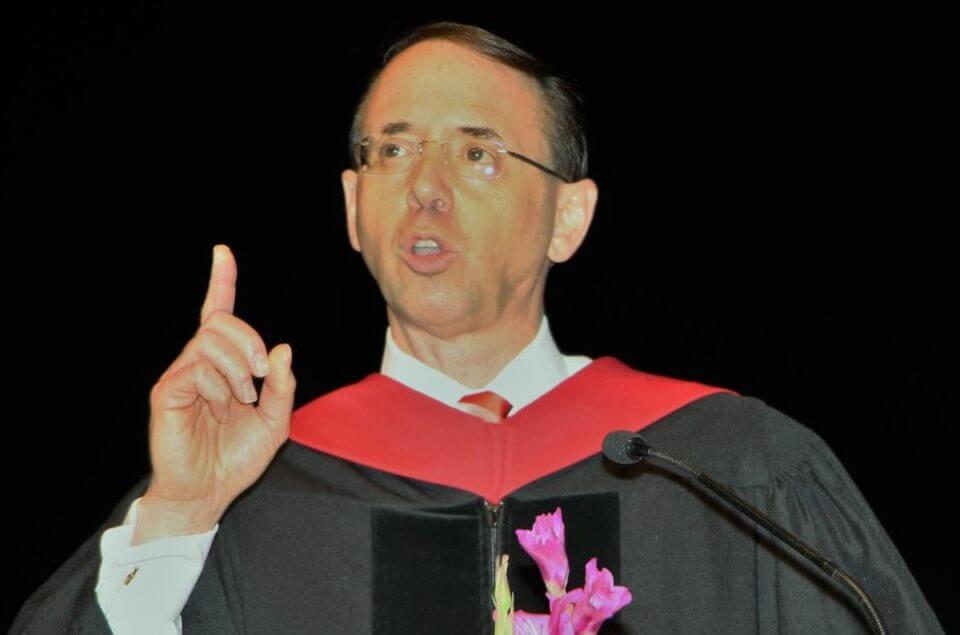 When U.S. Deputy Attorney General Rod Rosenstein spoke at Campbell Law School graduation May 11, he stayed above the fray about the future of Special Prosecutor Robert Muellers’ investigation into possible Russian collusion in the 2016 election.

Rosenstein has been in and out of the crosshairs of Donald Trump for months. Rosenstein has maintained his support for Mueller. President Trump has labeled the probe ‘a witch hunt.’

Rosenstein appeared relaxed and comfortable during his 20-minute presentation, smiling often and clearly enjoying speaking in a controversy-free environment. He did not look like a man who has been besieged for months by the White House.

His prepared remarks focused on noncontroversial topics such as defending the Constitution and the role of lawyers in society. While he never made any specific mention of the Mueller investigation, his comments may have hinted at it.

“Never compromise your personal views. As Thomas Jefferson famously said, ‘In matters of style, swim with the current; in matters of principle, stand like a rock’. I want to leave you with some advice on what to do when you are not certain what to do. The world is filled with complex ethical rules; so many rules that sometimes you can’t keep track of them all. When the path is unclear, its best to fall back on your own moral principles,” said Rosenstein.

After the law school announced in February that Rod Rosenstein would be the graduation speaker, Dean J. Rich Leonard fretted that he might be fired before the May 11 event. Leonard and other school officials appeared visibly relieved that morning to see the deputy U.S. attorney general in their procession. 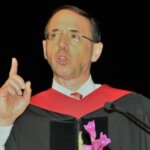