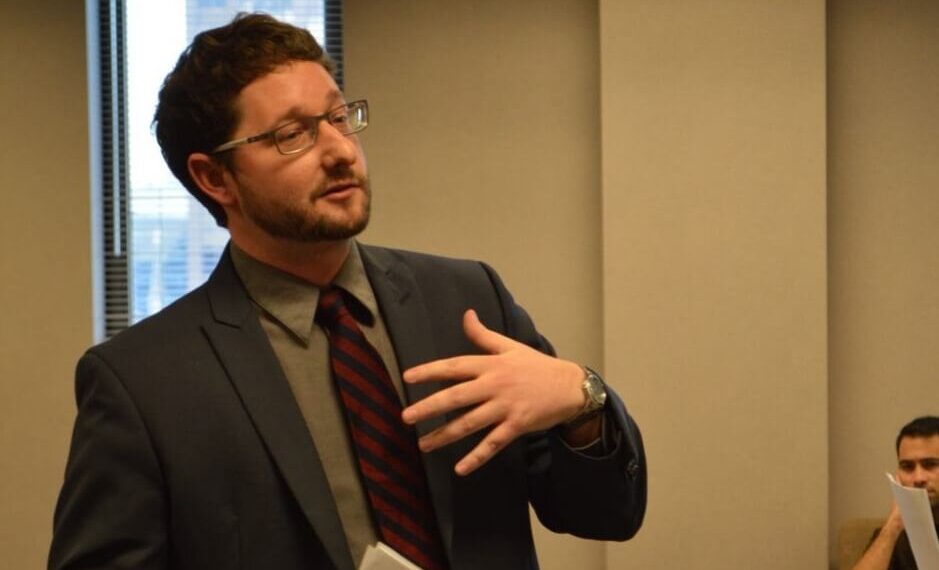 “My father’s incarceration and then his struggle to provide for us with a criminal record was a defining aspect of my childhood,” Daniel Bowes said. “Through a lot of struggle, he was able to find a job as a welder and then rise to shop foreman, detail, and management. He’s done well when given the chance. It just took a long time for people to give him opportunities.”

Daniel Bowes now helps coordinate the NC Second Chance Alliance as an attorney and lobbyist at the North Carolina Justice Center. Launched in 2008, the statewide alliance consists of people involved in the criminal justice system, reentry service providers, congregations, community leaders, and concerned citizens and helps people reintegrate with their families and communities by promoting policies and practices that restore jobs, housing, and other opportunities after a person’s justice-involvement

Bowes was born in Alamance County, North Carolina. He graduated from Duke with a Bachelor of Arts before going on to earn his Juris Doctor from NYU School of Law. “I was reluctant to leave North Carolina but I had the unique opportunity to participate in the Root-Tilden-Kern public interest program, so I left but always knew my legal career would be in North Carolina.”

While in law school, he spent time working in prisons on a prisoners’ rights program and with the U.S. Department of Justice’s Special Litigation Section, focusing on enforcement of the Civil Rights of Institutionalized Persons Act.

“Following an expungement of a criminal record, with rare exception, an individual can truthfully deny or refuse to acknowledge that a criminal incident occurred in their past,” Bowes said.

“It’s really helpful for people who are first involved with criminal justice system; it keeps them from being further harmed. With a charge on their record, individuals may be denied housing and jobs,” said Bowes. “Unfortunately, North Carolina’s expunction laws do not generally provide relief to people who have more than one incident of convictions.”

“Our alliance’s larger focus is reducing the stigma and automatic exclusions triggered by criminal justice involvement as well as the causes of criminal records,” Bowes said.

“People are desperate for relief,” he said, and even for the small portion of people eligible for relief, it’s hard to access.

“For someone seeking an expungement, an attorney is not absolutely required. But most people will have a very hard time navigating the process even for the simplest and most straight forward types of expunctions. It is rare that a person is aware of the possibility of relief and able to determine their own eligibility, complete and submit the appropriate petition form, and appear at a hearing,” said Bowes.

For this reason, the alliance holds CLEs around the state to educate attorneys about the collateral consequences of a criminal record and the expungement process. The alliance encourages and connects participants to pro bono opportunities to provide expungement relief to eligible individuals.

The expungement program, culminating in the passage of Session Law 2017- 195, was recently expanded to include people who have indefinite suspensions of their driver’s licenses based on their inability to pay the court costs attached to traffic infractions. The NC Justice Center’s Driver’s License Restoration Program is currently partnering with the NC Pro Bono Resource Center, NC Department of Public Safety, and district attorneys to pilot pro bono legal services programs in Wilmington, Raleigh, and Durham.

“There are half a million people in our state who have an indefinite suspension based on failure to pay the court fees attached to a traffic ticket. Over the last year, less than 25,000 people were able to restore their licenses after a FTP suspension – these are very long-term suspensions and often cycle people into the criminal justice system when they continue to drive without a license. Like virtually all parts of the American justice system, these suspensions disproportionately impact people of color.”

“We motion to get people referred from local reentry councils, community agencies, or people within 60 days of release from prison back into court and ask the court to find that the failure to pay was not willful and that their license should be restored,” said Bowes. “A driver’s license is essential for people to get or keep a job, access affordable housing and health care, and other daily activities that many of us take for granted.”

“What’s clear to us is that the current system of incarceration and re-incarceration is not working,” Bowes added. “It’s eroding the safety of our communities, draining our state’s resources and failing those who have paid their debts to society or otherwise deserve a second chance at prosperity.”