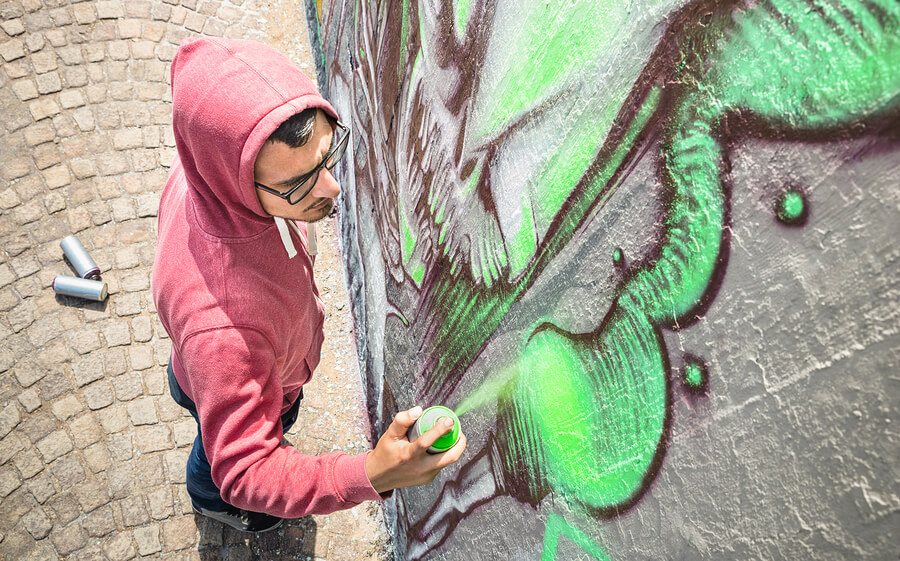 You’re walking down the street and you can’t avoid seeing the public display. It might not suit your artistic tastes or sensibilities, but there it is – public art. It might be thrust upon you in the form of a mural, graffiti or a tattoo. You can look away if you don’t like it, but such works of art are oft en intended to be provocative.

Copyright rights vest in the original artist and stay there, unless there is a written agreement to the contrary. Those rights exist as soon as the work of art is fixed in a tangible medium (i.e., as soon as it is painted or inked). The copyright owner has the exclusive right to make reproductions, prepare derivative works, distribute copies, and to publicly display the work.

What unique copyright issues arise regarding such works of art? Let’s do some IP issue spotting and musing on the topic of public art.

A mural is visual art (usually large) that is applied directly on a wall. Assuming the wall’s owner paid the artist to create the mural, you might think that the owner controls further disposition of that commissioned artwork. Not necessarily. The artist may have sold the artwork on its original “canvas” (the wall) but unless there is a written contract transferring the artist’s copyright rights, those rights are retained by the artist. In the United States, this includes one additional aspect not mentioned above, which is an artist’s “moral rights” – the right to protect the integrity of the original work from being altered in a way that would prejudice the artist’s reputation, and the right to prevent destruction of a work of “recognized stature.” 17 U.S.C. 106A.

A building with a mural on it is sold, and the new owner decides to paint over that mural. The original artist may be able to stop that based on the artist’s moral rights. What if the building’s owner wants to tear it down? What if the owner of the parking lot next door erects a structure that partially obscures the mural? What if the mural is in the background of a movie, video game, or TV show? What if the original artist is dead or has disappeared? What does it mean that the work of visual art must be of “recognized stature?” More questions than answers (the essence of issue spotting and musing).

Graffiti is the end product of the unauthorized writing or drawing on a public surface. Its creation is typically viewed as illegal activity (trespassing, vandalism, etc.). However, a graffiti artist is still entitled to the full range of copyright rights in the artwork, but typically doesn’t exercise those rights in order to stay anonymous and avoid civil or criminal prosecution.

The owner of a surface bearing graffiti usually doesn’t want it there, so it gets removed or covered. Alternatively, another graffiti artist modifies it, or paints over it with a new and different form of graffiti. What if the wall is torn down? What can the original artist do about any of that? What if someone takes a photo of a graffiti-bearing wall, and actually makes money selling prints or t-shirts of that photo? What recourse does the graffiti artist have when that happens? Again, time for more musing and thoughtful reflection, but isn’t that the essence of the enjoyment of art?

A tattoo is a work of visual art on a person’s skin, intended to be permanent, and depending of the attire of that person and/ or the placement of the tattoo, can be a work of public art. The wearer of the tattoo is the publicly viewable surface; it’s like a mobile mural.

The tattoo artist, if the artwork is original, owns the copyright rights in that tattoo (including moral rights) unless a written agreement says otherwise. Pugilist Mike Tyson has a rather prominent, unusual, and memorable facial tattoo. After another epic night out with the boys, when that same tattoo showed up on actor Ed Helms’ face in the film,“The Hangover, Part II,” Mr. Tyson’s tattoo artist sued Warner Brothers for copyright infringement. The case settled, but at the preliminary injunction stage, there was no question in the judge’s mind that tattoos are protectable under copyright law. Would a tattoo be considered a work of visual art subject to the artist’s moral rights? If so, what if Mr. Tyson wanted to alter or remove his facial tattoo someday? Could the artist, via a moral rights argument, stop him? Could the artist ink that same tattoo on someone else’s face, such as Olympic medalist Ryan Lochte, for example? What about third parties selling temporary tattoos based on that art? Still more questions we don’t have the space to answer, and further musing. Z. Peter Sawicki and James L. Young