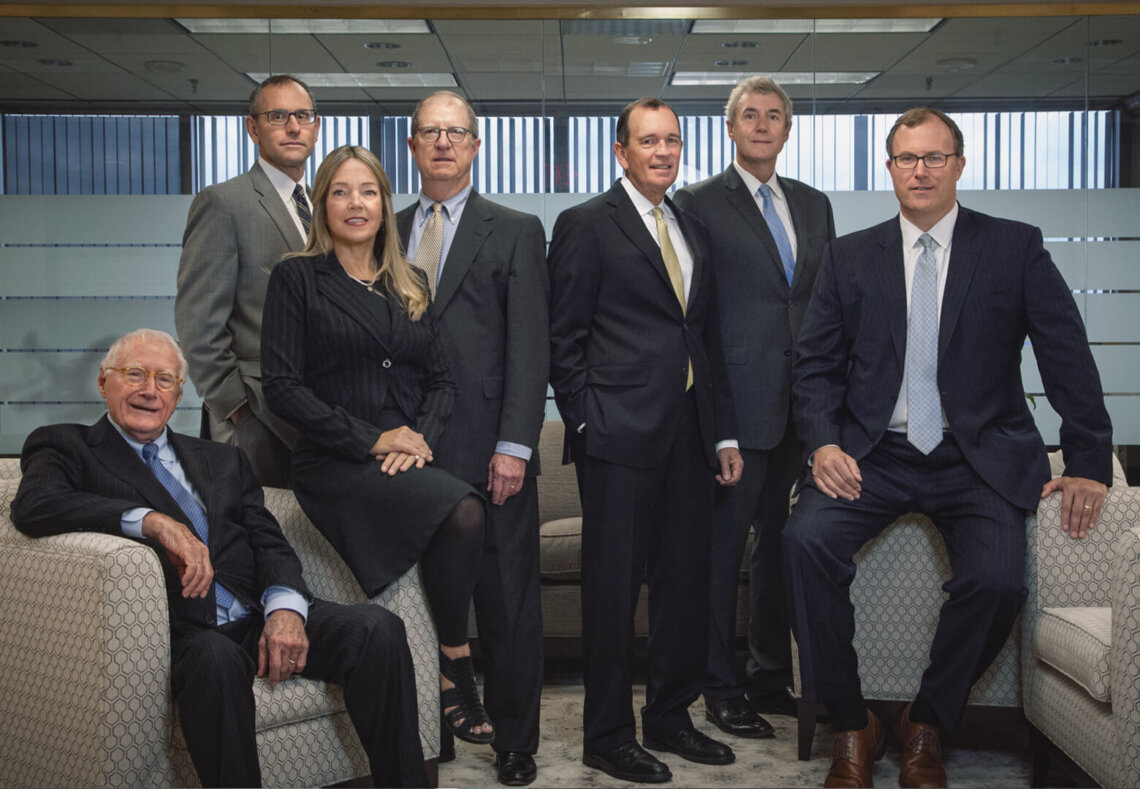 Tharrington Smith: The Courage to be Unpopular and a Commitment to Truth

Raleigh criminal defense attorneys Roger Smith, Jr. and Russell Babb were making final preparations to defend a client in a recent North Carolina murder case. “Every effort to resolve a plea favorably for the client had been exhausted. We knew we were going to trial,” recalled Babb. “We were in our war room, furiously writing on the whiteboard, statute books open and spread all over the tables,” when Wade Smith, the third member of the Tharrington Smith defense team and a co-founder of the firm, calmly entered the room with a book under his arm. He sat down and read a few pages from Sun Tzu’s “The Art of War.” When he was done, he gently closed the book and said, “Does anyone have any questions? Gentlemen, we are about to go to war.”

“Hearing Wade read from ‘The Art of War’ on the eve of that trial was one of the coolest moments of my life,” said Babb.

Tharrington Smith is best known for high profile criminal cases. The firm defended one of the Duke Lacrosse players falsely accused of rape in 2006. It also defended “Green Beret Killer” Dr. Jeffrey MacDonald in the murder trial that was the basis of the book and TV mini-series “Fatal Vision.”

“These high-profile trials are generally once in a lifetime cases,” said Babb. “Most of my clients are not rich, famous, or well-known. I’ll represent anybody who has been accused of a crime so long as it is a case I’m interested in, and I think I can help that person. People come to us in crisis. The thing I try to convey to them is that when a potential client wants to hire me on a case, they are getting the benefit of the entire criminal defense team.”

“At the forefront of my mind when someone calls me, is that they are never calling with good news. It may not seem like a big problem to other people, but it is to them,” said Roger Smith, Jr. “So, the first time I meet with a prospective client I tell them that I’m really sorry that they are here to see me.”

In addition to its seven-member criminal defense team, Tharrington Smith is known for civil litigation, family law, criminal tax matters, and for representing public school boards across the state, among its core practice areas.

We believe lawyers are storytellers. We learn our client’s story by taking the time to listen to them.”

Smith said creating a place where people looked forward to coming to work every day was a priority. “We have gone to great lengths to make the environment a happy space, where lawyers and staff alike thrive and enjoy the community a large firm has to offer. This dramatically impacts our clients’ experience.”

THE COURAGE TO BE UNPOPULAR

Wade and his brother, Roger Smith, Sr., fellow Morehead Scholars at UNC, worked together on innumerable cases. Perhaps none as notorious as the 1979 trial of James W. Hutchins. He was accused of murdering three deputy sheriffs. It was the first capital case to be tried in North Carolina following reinstatement of the death penalty. “The entire community was totally outraged and furious,” recalled Smith. “When we got to the (Rutherford County) courthouse that night, the courthouse yard was full of people who hated us and did not wish us well in any way.”

“We had to go in there and keep our heads up, keep our dignity about us, and show courage. We had to remember the reason we were there was to help this man,” said Smith. Hutchins was ultimately executed after numerous eleventh hour appeals and stays of execution pursued tirelessly by Roger, Sr.

“I think when you are courageous, you are not afraid to take a position, and in some cases it might not be a popular decision,” said Howard Cummings who joined the firm in January following a 30-year career in the Wake County DA’s office.

“It may be a case the public is disgusted with, but the client has rights, and it’s up to the prosecution to do their job. Sometimes it takes courage to represent somebody and stand up for their rights in front of 12 people in a jury box, and doing it even when that is politically, morally, or socially unpopular.”

Sometimes it takes courage to represent somebody and stand up for their rights in front of 12 people in a jury box, and doing it even when that is politically, morally, or socially unpopular.”

As a prosecutor, Cummings handled high profile cases such as the 2011 trial of Brad Cooper and the 2012 retrial of Jason Young, both accused of murdering their wives in 2006.

“Cummings brought an understated courtroom style short on bombast that still carried the weight of the crime,” wrote the Raleigh News & Observer upon his retirement.

Howard Cummings is a native of Kinston, NC. He graduated from NC State with a Bachelor of Science in civil engineering and earned his Juris Doctor as a member of the ‘guinea pig’ class at Campbell College School of Law— now Campbell University Law School. Cummings started as a prosecutor in Pitt County and spent three years there before going into private practice for seven years. His practice encompassed a broad array of civil and criminal matters.

Upon his retirement from the DA’s office in 2018, Governor Roy Cooper bestowed upon Cummings the Order of the Long Leaf Pine, in recognition of his decades of service to North Carolina.

Cummings said his desire to practice with Tharrington Smith was born of his experience as a prosecutor in cases against Wade Smith. “His approach when he came in the DA’s office was totally different from the approach of most of the other attorneys who came into our office. I learned from him that you get more coming in light and humble at the front end than you do coming in with blazing guns. That just doesn’t work very well,” said Cummings.

“I feel like my experience in the district attorney’s office will serve me well to be able to help people with serious problems,” said Cummings. “I know the thought process of investigators and prosecutors as they develop a strategy, as they build their case. I’m very much looking forward to helping the accused, to helping people, without regard to what they are charged with.”