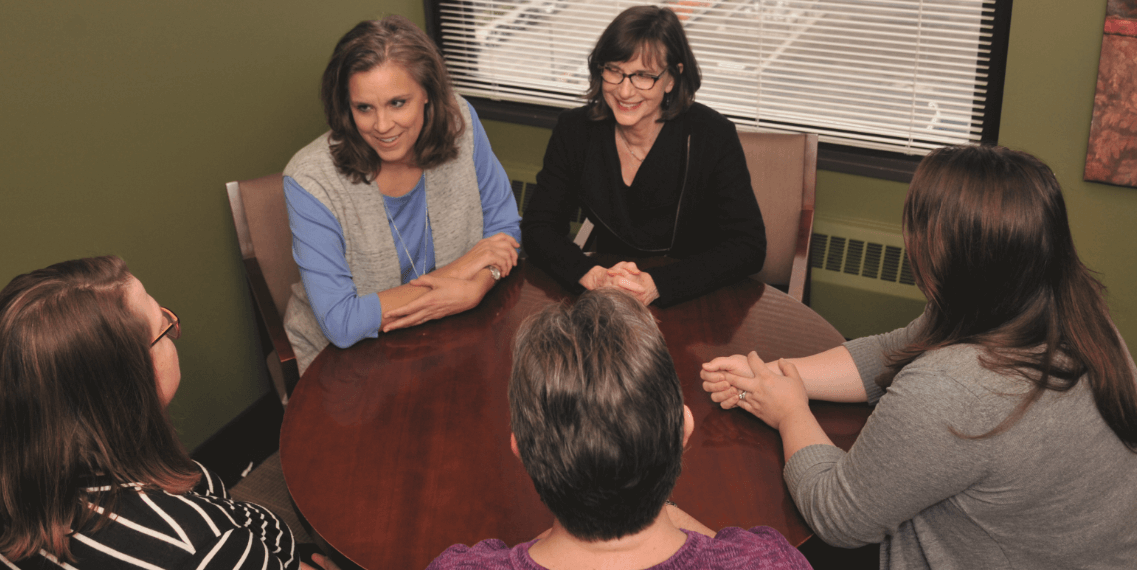 He’s my boss, my manager, the boy next door, the intruder, my client, my colleague, the guy I beat for the job, the busboy, the guy walking down the street, the boy who asked me out, the man in the parking lot, the guy I thought was my friend, the stranger, my onagain off-again boyfriend, or the guy on the bus. … At the end of my shift, he makes me kiss him before I can leave work. He traps me in the walk-in freezer and tells me I have a nice smile. … He pulls up my skirt and sticks money up my underwear. He uses my computer to find girls online. He uses a fake name. He walks past me as if I’m not there. He tells jokes about rape. – “Today His Name is Keith” by Toni Halleen

In the aftermath of very public revelations about men in power and their abuses of women, many of us are reflecting on what it means to be equal, and how society has either championed or failed women in the arena of sexual harassment and sexual assault.

Here, we are invited to sit in on a conversation with two women who have devoted their law careers to empowering people and advancing justice. Jean Boler and Toni Halleen (who wrote the essay excerpted above) have fought fiercely for equity and fairness in the workplace, and they speak candidly about their experiences as attorneys – and as women. In doing so, they are pulling back the veil on the experience of women in America, exposing the shame of a society that continues to marginalize more than half its citizens.

Toni Halleen: When the president of the United States bragged about sexually assaulting women, and then was elected despite his horrific admission, I had a traumatic response. I know I’m not alone. It triggered stress in many women because such a high percentage of us have had experience with sexual harassment, gender discrimination or sexual assault.

Jean Boler: Instead of being safer to talk about it, it becomes less safe, and women take a step back.

TH: It makes us feel marginalized. But it’s not just one thing. It’s a whole string of events. Even in legal jobs and in a professional setting, I’ve had men acting out or being leery or suggestive. It all adds together. The comments, the touches, the smirks, the grabs. Whenever I share my story or my essay with other women, I get the same reaction. Women invariably say, “Me too – It happened to me.” And then we reveal our similar experiences with one another. These are things a woman attorney or judge can understand.

JB: Part of our job is explaining that cumulative experience and finding a way to get the law to recognize it too.

TH: I recently dropped off my stepdaughter at college, and one of the requirements for all freshmen was to watch a video about sexual assault, including the definition of consent. That’s progress, I guess, but it’s also pretty incredible that we need to break it down like that. Of course, I was taught that if a boy snaps your bra or knocks you down on the playground, it means he likes you. And I believed it, despite my bloody shins. So maybe we need to start younger. Maybe we need to teach how to properly treat a girl when you like her. And for all children: when someone kicks you? You talk about it! If you see a boy kicking a girl, you stop him. You say, “That’s wrong.” And you tell. But that is so hard to do.

JB: We are fighting against a deep cultural bias. Even men with good intentions sometimes feel defensive. We all have to be so expert in how we have these conversations. We want men to know how it feels. It’s not about accusation, but knowing what it feels like. Women haven’t been able to start the conversation because we’re afraid of being judged.

JB: But when I talk to women about making a complaint or bringing a case, I have to be honest and tell them there is a cost. It’s not TV. Women have a lot of good reasons not to talk about what’s happened to them, and we need to make it safe to break the silence. That’s what the #MeToo campaign is all about. Because women have been convinced that we are the ones who need to be ashamed, we’re not calling out the real people who are responsible.

TH: When I was a teenager, I worked at a mall chain restaurant. My manager told me he he hired me because I had a great smile. At the end of every shift, he’d point to his cheek and he wouldn’t let me leave until I kissed him. I’m ashamed of that. I look back and think, “I was weak. I should have stood up for myself.” And once he trapped me in the walk-in cooler. It scared me, but I didn’t want to be seen as weak or afraid. But what he did wasn’t right. Who was I going to tell? He was the boss.

JB: That should meet the definition of sexual harassment. If you’d said no, would he have fired you? I’m disappointed in how the law has developed on the definition of sexual harassment. Many conservative court opinions do not reflect a “reasonable woman standard.” Of course, something like that would make you not want to go to work. But some judges look at it and says, “So it’s a kiss on the cheek. What’s the big deal?” These cases are often better off in state court where there are more women judges. I think women better understand the emotional toll of these encounters. Unfortunately, we have to battle against many precedents set by men on the bench. We need to keep bringing these cases and try to change the standard to more accurately reflect the kind of behavior that drives women out of jobs.

TH: The legal standard is a reasonable woman’s point of view, but can a man really do that? On the other hand, most women can immediately relate. That’s one of the reasons the #MeToo conversations are so powerful. I’m assuming that many women judges have also had these experiences, too. I’d want the judge to know that when my boss asked me to kiss him, I didn’t welcome it. I wanted to avoid him. I felt diminished. A woman can understand that.

When we represent women who experience sexual harassment at work – we’ve been there.

JB: The polarized times we are living through now are waking up a lot of women and men. We need more strong women to navigate an adverse process designed by men, and change it. Look at what’s happened with gay rights. Under the law, gay people now have a constitutional right to marry. The courts were saying no until there was a huge social groundswell, and then the judges had to get on board, too. If this #MeToo campaign results in more women and girls reporting sexual harassment and saying, “This is not right. This needs to stop it right now!” that’s progress.