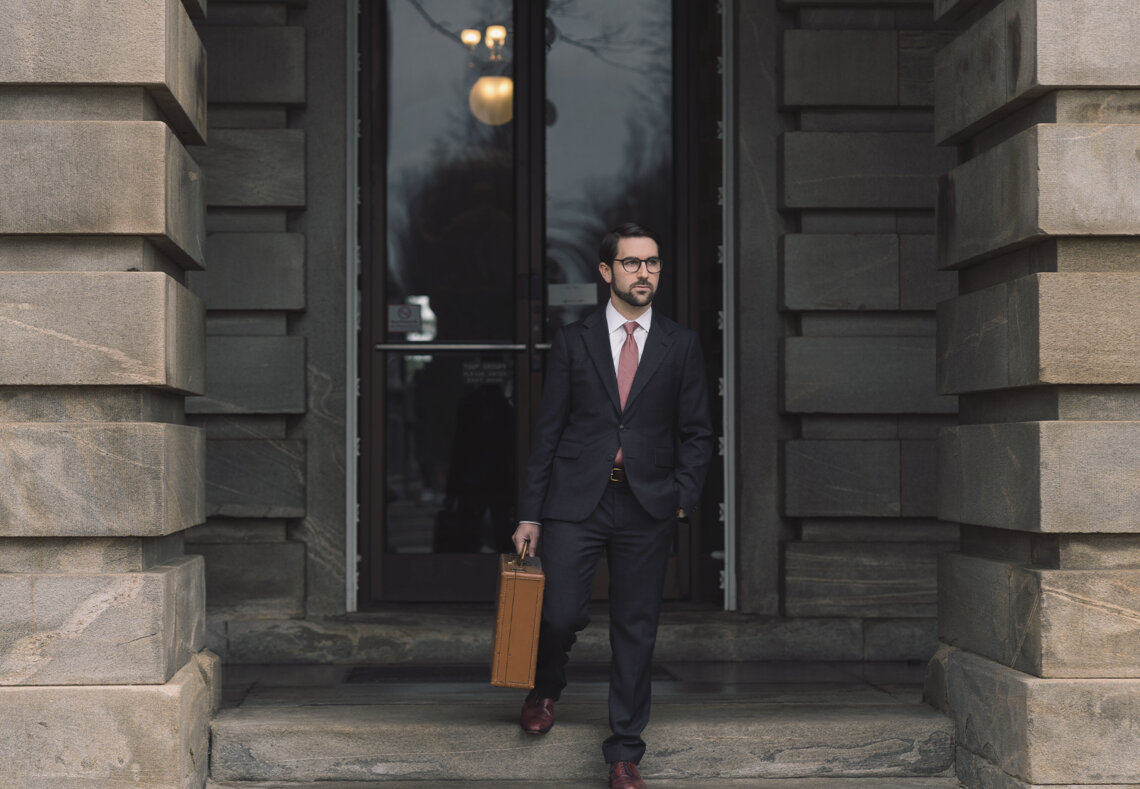 The briefcase carried by Raleigh lawyer Elliot Sol Abrams bears the initials S.E.A, for Elliot’s grandfather, Sol Eugene Abrams, its original owner. Elliot is fourth generation of a family that has produced lawyers, judges and teachers.

“My grandfather was a mythical character to me, in part, because he passed away before I was born,” said Abrams. “He took a path of self-sacrifice in order to be a lawyer.” Sol was a navigator in a bomber that was shot down over Romania during World War II. He was a POW and was smuggled out of the country by a Romania princess who ran an underground.

“Sol excelled at Georgetown Law School and was offered a clerkship with Justice Black at the U.S. Supreme Court. Having served in the war, he was older than most students and was anxious to start his career. So he turned it down and moved home, where he devoted his practice to representing people and furthering causes, such as ensuring the voting rights of minority groups. I think my choice to return home to represent people in Raleigh was influenced by his choice.”

The legal world is full of Abrams relatives. Elliot’s mother and father and his brother and sister-in-law are partners at the catastrophic personal injury law firm, Abrams & Abrams, P.A. One uncle is a judge, another is a law school dean. His extended family includes a member of the North Carolina Board of Law Examiners, a movie industry lawyer in Beverly Hills, a retired prosecutor, and lawyers at firms throughout the country.

Abrams is the heir apparent of the federal practice at Cheshire Parker Schneider. Like Abrams, the firm’s senior partner, Joe Cheshire, is the descendent of generations of lawyers. Cheshire founded the firm in 1978 and developed it into North Carolina’s premier small, specialty firm, which focuses on all areas of criminal law, as well as asset forfeiture defense, constitutional challenges to government conduct, and NCAA infractions, a practice Abrams has developed and become nationally recognized for.

Members of the firm have tried cases in 86 of North Carolina’s 100 counties, 16 different states, and numerous federal districts throughout the nation, as well as federal courts of appeals and the United States Supreme Court.

The firm’s professional license defense practice, led by Alan Schneider, is also one of the largest practices in the state representing professionals in front of licensing boards, such as the State Bar and Medical Board, among others.

Our interview with Abrams took place in the firm’s temporary offices, as its offices in the Old Alexander/Masonic Temple Building where they have been since 1980 are being rebuilt for the future of the firm. It almost feels like a modern day changing of the guard in one of our state’s classic long-standing small law firms that is more like a family than a modern-day business.

As with almost every member, Abrams has spent his entire career at the firm. During summers from Georgetown Law, he worked for Joe Cheshire. He was initially hired to drive Cheshire to his cases across the state so he could work while in the car. “But really he just told story after story after story,” laughed Abrams. “There were troves of knowledge in those war stories, though.”

“My biggest takeaway from working with these folks is that what set them apart was not just technical legal skill and preparation, but their humility,” said Abrams. “Joe and Wade are so good because they view themselves as no better than anybody else. From day one, Joe drilled into me that, as the defense lawyer, you’re the least important person in the room. The clerks, the bailiffs, court reporters, the people who clean the courthouse, these folks are in court every day. They interact with the judges, and the jurors watch how they treat you. If you think or act like you’re more important than any one of them, you’re not only wrong, you’re a fool.”

Beyond the ability to connect with people from all walks of life, Abrams said that “the preparation that these great lawyers put into their cases, and the care and attention and emotional investment they give to their cases is remarkable. These are things I try to emulate.”

“[I]t’s impossible not to be emotionally invested when you know someone is putting their future in your hands.”

CRIMINAL LAW IS A NARCOTIC

After earning his law degree, Abrams joined Raleigh-based Cheshire Parker Schneider. The first case he worked on at the firm was State of North Carolina v. Kirk Turner. Turner was accused of first-degree murder in the death of his wife. He claimed it was self-defense. He’d been run through with a spear by his wife twice, through the front of his leg and out the back, before responding to defend himself.

Walking into a mock cross examination of Turner, Cheshire turned to Abrams and said, “This is wrong what I’m doing to you.” Stunned, Abrams asked what he meant, to which Cheshire replied, “Criminal law is a narcotic. Once you do this, you’re going to be hooked.”

“He was right,” said Abrams.

Turner was acquitted, and the case became the only case featured on the TV show 48 Hours Mystery in which the defendant was found not guilty.

Cheshire Parker Schneider has long been on the forefront of positive changes to the criminal justice system. Joe Cheshire and Brad Bannon were instrumental in the passage of the open file discovery laws that require prosecutors and police in North Carolina to disclose to defense counsel anything related to the case they have gathered.

Now, of course, the public seems to be calling out for further, dramatic change. “I think two of the most problematic things I’ve seen are, one, mandatory minimum laws that prevent judges from sentencing defendants to what they think would be an appropriate sentence. These mandatory minimum laws give prosecutors overwhelming power to extract guilty pleas”—negotiation power, Abrams added, “that in the commercial context, might render a contract unconscionable.”

Second, Abrams said that preventing judges from paroling reformed inmates also creates bad incentives for inmates and “saps them and their families of hope.”

“I have sat with so many families who have lost their sons and fathers to decades-long prison terms. These defendants go away, leaving sons and daughters and mothers and fathers heartbroken, and there’s generally no getting out early for being an overachiever in prison. That has a negative ripple effect throughout generations.”

“I’d like to see some form of judge-based parole,” Abrams explained. “This process would give inmates a reason to stay connected to their families and their communities and would give their families hope that if their loved one shows real progress, they will get home earlier.”

Abrams said that the federal First Step Act was a positive step in this direction for federal inmates. “But, at the end of the day, I think judges are in the best position to decide whether someone is ready to be released.”

Abrams and his wife, Mim, a consultant at Deloitte who focuses on assisting the North Carolina government, have two daughters. With his little remaining free time, Abrams likes to spend it offshore fishing with his father and father-in-law. The similarities between game fishing and criminal defense work is not lost on Abrams.

“Most federal criminal cases are like an assembly line. Someone is charged, almost all plead guilty, they often cooperate, and they get typically a harsh sentence. I am aiming for unique results for my clients. Certainly, it’s not always possible. But if you go blue marlin fishing, you don’t catch fish most of the time either,” said Abrams. “With dedication and preparation by the entire team, you’ll occasionally hook and land one.” (They catch and release them; he was quick to point out).

Abrams says that criminal defense, like fishing for blue marlin, requires extensive preparation and teamwork. “You can’t have those really thrilling experiences offshore by yourself. I think the way to accomplish big things in this world is to be part of a team that’s really good, that’s beyond prepared, and in which everybody plays their part—where everybody has a shared passion for the goal.”

Abrams continued, “I think that mentality—passion, preparation and teamwork—is what defines our firm. Every one of us on this team is devoted to living up to the tremendous faith and trust our clients place in us and to the preparation and legal knowledge the judges and opposing counsel expect from us.”

“It’s often hard and sad work,” Abrams added. “But, together, we do a darn good job for people.”