Out of the Lab, Into the Courtroom 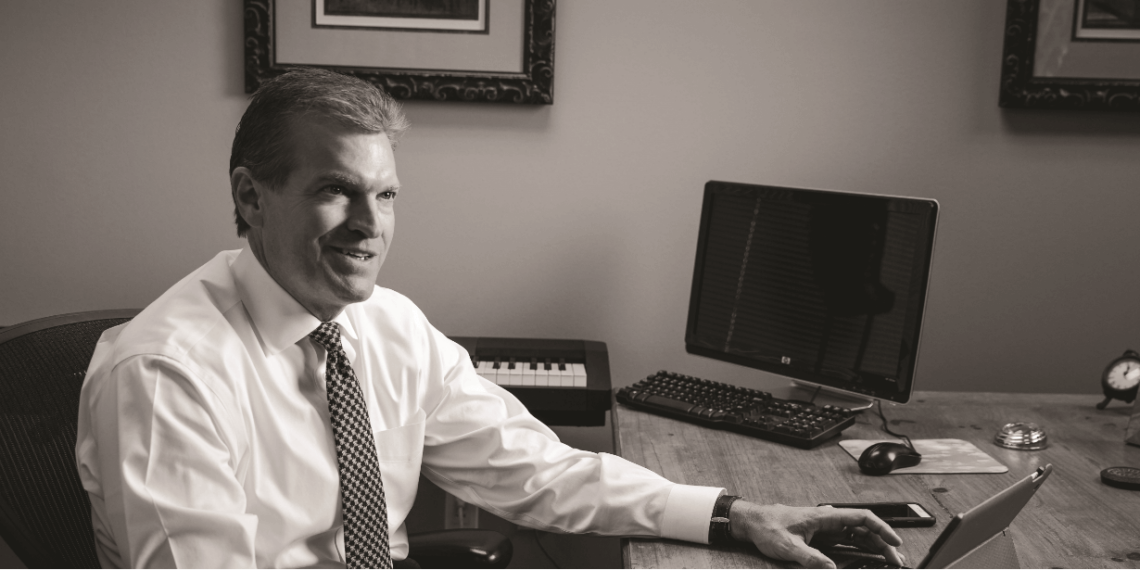 Growing up as the son of a legendary federal prosecutor and former head of the organized crime section of the Justice Department, John DeFeo couldn’t help but notice how passionate his father was about his work. His father’s example led him to law school, as it did his younger sister and brother. His mother was a registered nurse whose only regret was not becoming a medical doctor – something few women pursued at the time. His parents’ achievements and strong work ethic inspired him to pursue his practice of law with that same degree of passion.

“My parents’ values had a big impact on me. So, as a lawyer, I try to put myself in my clients’ position and give them the same advice I’d give my family. I’ve got some incredibly loyal clients who refer people to me all the time. I treat them the way I would want to be treated, even if that requires me to tell a potential client that pursuing legal action is not in his or her best interests. Being a solo practitioner gives me the luxury of choosing the clients and cases I want to work on and it has led to an eclectic practice.”

DeFeo worked on the defense side of the profession for years before deciding to cross over to do plaintiff ’s work. For several years, he was national trial counsel for a large insurer and was tapped to try lawsuits involving significant exposure all across the United States. The experience gave him an immense amount of trial experience with some of the best lawyers in the country. Now he works both sides of the docket and feels his diverse practice makes him a better, more experienced trial attorney.

After working in a partnership specializing in lawsuits and class actions against various banks, accounting companies, and law firms involved in questionable tax shelters, he began his own firm in 2007. Within weeks, he received referrals from friends and lawyers with whom he had worked resulting in a steady stream of business. “Most of my clients have come through personal referrals. The caseload and client base has grown consistently, and being a solo practitioner allows me to screen all of my clients and cases and only take on those I feel passionate about – a luxury many big firm lawyers do not have. One of the best examples is a case where I assisted one of my longtime clients in getting a world famous painting back from The National Gallery of Art in Washington, D.C. In May of this year, my client made headlines in the art world when she sold the painting for $28 million at a Christie’s auction.”

Regardless of his having been in practice for 28 years, DeFeo hasn’t become jaded about the legal process and working to achieve justice. Despite the fact that he had never brought a defamation suit before, when approached by a client who felt she had been defamed by D Magazine, DeFeo did not hesitate to file suit on her behalf and recently won an appellate decision in the case despite the fact that D Magazine is represented by one of the largest and most high-profile law firms in the United States. “David vs. Goliath situations don’t deter me; I am not intimidated,” DeFeo says.

John DeFeo and Associates, PLLC is a Dallas-based firm, but has frequently been asked to represent clients in disputes in other states. DeFeo is admitted to the State Bar of Texas and has been admitted pro hac vice in dozens of other states to try or oversee lawsuits. The firm’s practice areas range from business disputes and real estate matters to wrongful deaths and personal injury cases.

DeFeo says, “Even when I was at bigger firms and had the ability to have a trial team, my preference was to do virtually all of the trial preparation myself. When I try a case, I prefer to be the only lawyer at the table rather than be a part of a table full of lawyers and paralegals.”

He immerses himself in his client’s cases and refuses to delegate important depositions and hearings, which he has found gives him far more credibility with judges. “Judges and juries look to each party’s lawyer to see who they trust, and it is often a real difference maker in the outcome of a trial,” DeFeo says.

“When I go to trial, I’m going to be the person who picked up the case the first time it was filed, and I will have done virtually everything from start to finish. I think that makes me a much more effective trial lawyer because I’m not relying on other people to understand parts of the case. If you don’t take the deposition of key witnesses, you’re at a disadvantage and it makes cross examination far less effective. For me, that’s always been my trademark. I’ve regularly been the lone lawyer at the table opposite the other side’s trial team.”

Hire an Attorney, Not a Firm

DeFeo sees one of his competitive edges as the ability to provide extensive experience and knowledge at rates far more affordable than those charged by larger firms. It is not unusual for lawyers with large firms on the other side of a case to charge more than twice DeFeo’s rates, despite often having less experience. Being the sole decision maker also allows him the luxury of taking select cases on a contingent fee basis.

“My firm is more economical because I don’t have the overhead of a bunch of lawyers and the need to maintain a huge office and staff. And, when I talk to lawyers at the big firms, I often find that they have a fraction of the trial experience I have. I’ve tried a large variety of cases involving business disputes, catastrophic personal injury, and medical malpractice cases and significant trucking accidents, having served as National Trial Counsel for an insurer of trucking companies. I often have far more trial experience than many big firm trial lawyers who charge more than twice as much as I would for a similar case. It’s just basic economics. One of my clients told me early in my career that a client should hire a lawyer – not a law firm. I take that to heart.”

DeFeo says his legal experience on both sides of the docket has made him more efficient than many other lawyers and technology has leveled the playing field when competing with larger firms. Moreover, since he is the one handling his client’s cases, the clients do not face the expense and time of dealing with redundancy. “Many of my clients have complained that other firms charge them for having three or four lawyers look at the same documents or perform the same tasks. If I take a case, I’m going to know everything about it; I’m going to work on it, and I’m going to handle it efficiently,” he says.

Out of the Lab and Into the Courtroom

DeFeo began college as a pre-med student, but after a time realized that such a study would require hours of time working in windowless labs – an environment that did not suit his personality given that he has always been active in outdoor sports activities. Yet, he was still interested in biology and the human body and when he started working with an insurance defense firm after graduating from law school many of those cases involved the evaluation of claimed injuries. Those experiences and cases led him to medical malpractice, which requires a good understanding of human physiology and medicine.

“The fact that I’ve had such extensive medical malpractice experience on both the defense and plaintiff sides helps a great deal in personal injury cases in terms of knowing how to deal with physicians and in getting the right reports and evidence in your case.” DeFeo has seen too many personal injury lawyers make outrageous settlement demands without the necessary medical evidence documenting not only the injury but the cause of the injury and necessary treatment.

On the commercial side, he has handled many different types of cases. He enjoys the challenges and learning that are inevitably part of each commercial business dispute. Over time, he has built a base of knowledge that continues to serve him well and is ever- expanding.

“Success for me truly is putting myself in my client’s position and then finding the proper solution in or out of the courtroom that satisfies that client’s needs. I’m successful because I make it personal. My clients appreciate that kind of commitment,” DeFeo says.

Outside of the courtroom, DeFeo is happily married with four sons, whose ages range from 15-22. The family owns a home in Colorado, which they use for escapes from Dallas that include sporting activities such as rock climbing, mountain biking and snowboarding. All of DeFeo’s boys enjoy extreme sports. “I’ve been able to stay young by always trying to keep up with them,” says DeFeo. “When we go on vacation, we don’t sit around.” This past summer, the family took a trip to Costa Rica to surf, dive and climb in the jungle. He also plays guitar and piano with friends, has played with several bands, and enjoys classic rock.

“A lot of lawyers complain about having to give up their family life in order to be successful in their law practice. I’ve been incredibly fortunate in that I’ve been able to work hard, but also spend a great deal of time with my wife and boys. It’s hard to achieve that kind of work/life balance at a big firm. But, like my website says, ‘Life should be an adventure. Getting great legal advice should not be.’ I actually believe that, and I live it every day,” DeFeo says.