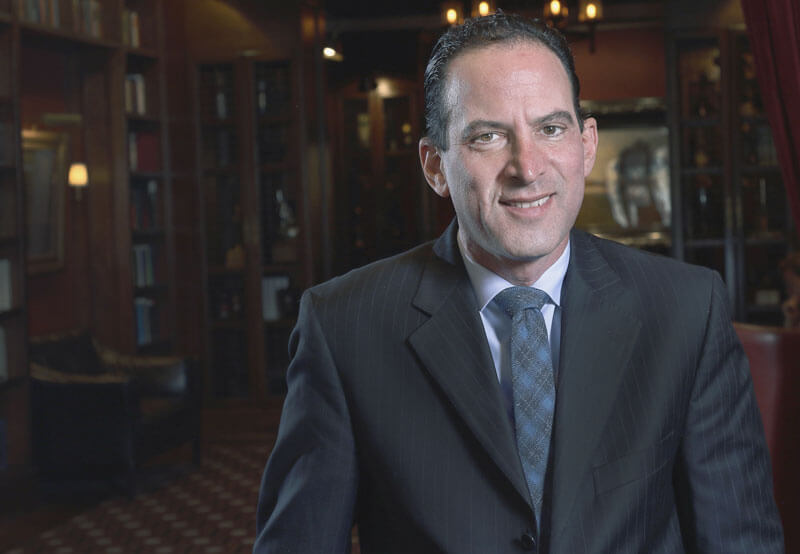 To the unsure, uneasy and undocumented immigrants in the Los Angeles area, attorney Alan Diamante wants you to know he feels your anguish. And he’s doing something about it.

A self-described immigrant rights activist, Diamante fights to raise awareness of the laws for both the immigrants and those standing on the sidelines. His passion started at a young age.

“My father was a blue-collar immigrant from Argentina, and I was raised in the city of Los Angeles,” he says. “Going to public school with a heterogeneous group from all over the world has always made me appreciate the diversity of race and culture.”

His sensitivity towards immigrants grew in college, when he gained first-hand experience of the foreigner’s plight while studying abroad in England. After learning his financial aid had been terminated, he was given a choice: Give up his dream to study in a foreign land and go back to the States or stay and find work.

The teenager chose the latter when a Colombian expat, one of the few Latinos in town, reassured him it would be easy to find employment. Diamante bought a bike for 15 quid and got to work.

“I never forgot the humbling experience,” he says recalling one of the three jobs he took on. “After washing dishes for hours at the only Chinese restaurant in town, I would ride my bike home in the midnight drizzle drenched.”

Describing this period of his life as “maturing, eye-opening and life-changing,” Diamante credits it as a factor in deciding later in life to become an immigration lawyer.

“While I was in England, I was the ‘illegal immigrant,’ taking jobs that natives would not consider for the low pay,” he says. “I understood at that point that people assume the risk of leaving their home country to work in a foreign land because there’s usually a great need or dream behind it.”

Taking to the Street

Keeping those dreams in mind, Diamante took up the cause for immigrants as a law student at Loyola. It was the mid ’90s, and the state was grappling with California Proposition 187, which denied public services to undocumented immigrants. He joined the student La Raza group and protested in the streets. To his dismay, the proposition passed but was soon subject to an injunction.

“I found it to be unconscionable that California would be supportive of a draconian program that would prevent children and parents, documented or not, from obtaining healthcare and education,” Diamante says. “I saw it as a form of state-sponsored terrorism.

“I’m part of the Martin Luther King Jr. generation,” continues Diamante, who was nearly a year old at the time of the civil rights leader’s assassination. “Growing up we honored MLK, who devoted his life preaching love over hate. With Prop 187, the State of California attempted to strip basic human services from a class of people. This was akin to the civil rights violations that I was taught to be against, whether I was affected by them directly or not.”

Their Cause, His Cause

With palatable outrage that the state would turn its back on children and sick individuals because of legal status, Diamante prompted himself further into the realm of protecting immigrants. Originally planning for a career in civil law, in 1997 an executive director of a non-profit asked him to provide immigration legal services in Los Angeles.

Immigration law and activism against immigrant oppression has proved to keep him busy ever since. Even though Prop 187 was ultimately deemed unconstitutional, millions of undocumented immigrants continue to fight for basic human rights while being vulnerable to “notario fraud,” the rampant practice of swindling immigrants seeking immigration assistance. Diamante says that throughout the years 75% to 80% of his clientele have been victims of fraud.

“The high demand for immigration services has motivated both unscrupulous attorneys and fraudsters to steal from hardworking people who cannot navigate our legal system.” Diamante explains. “It’s a common scheme to take money by promising a green card or a work authorization document without explaining eligibility, risks and the likelihood of success.”

He says that often an immigrant pays a lot more than originally expected and ends up with a deportation order.

“This type of fraud shatters dreams and devastates families usually by deporting the breadwinner,” says Diamante, who continues to fight immigration consultant fraud and takes civil action against those who prey on immigrants. He also routinely represents immigrants before the Department of Homeland Security, the Department of Justice and the Department of State.

While there have been significant challenges for immigrants in his more than two decades of practice, Diamante says it’s drastically different now.

“For the first time we have an executive branch that overtly aims to curb legal immigration and disregards the Fifth Amendment’s due process clause in an effort to increase deportation numbers,” he says, adding he believes the country is in the middle of a human rights crisis.

“Because of a president’s fear mongering, undocumented immigrants and their U.S. citizen children live in terror,” he says. “For instance, it was clear even before the last presidential election that most overstays were people who traveled from Canada, including many of the 9/11 perpetrators, but immigration rhetoric has been fixated on migrants that enter through the southern border.”

With outrage over this phenomenon, he says, he and many other immigration lawyers cannot avoid being activists.

“There is a vigorous social movement in the United States to protect immigrants from the oppressive and discriminatory enforcement of the current immigration laws,” he says.

Diamante says he finds it hard to make sense of the current administration’s immigration policy without concluding that President Trump must be receiving bad advice from racists who have had an anti-immigration agenda for decades.

“Asylum-seeking migrants are being described as invaders, and this sounds like a justification to start a war,” he says. “More often than not, anti-immigrant measures are supported by flawed statistics and ‘alternative’ facts.”

A new word, “Crimmigration,” he says, has been coined to describe the criminal treatment of immigrants even though deportation is a civil proceeding.

“It can be said that actual criminal defendants are provided more rights than immigrants in removal proceedings. For example, there is no Sixth Amendment right to an attorney, and this has made it possible for immigration judges to proceed against unrepresented 2-year-olds.”

And then there are the raids. Diamante notes that Immigration Customs Enforcement often commits violations of the Fourth Amendment, but only a small fraction of the cases can be fought in court because most result in expulsion without an opportunity to seek counsel.

“When asked about whether they complied with federal regulations, often officers will outright lie to you,” he says. “Before, that was a big deal, and now it seems to be the norm.”

In a further blow to due process, Diamante says the government has made it more complicated for people to get asylum, especially given the little time an asylum applicant is provided to gather documents from abroad and prepare witnesses. Diamante, who provides deportation defense pro bono, says it’s “very challenging, but also very telling when the government makes it harder for people to get a defense.”

Worsening the due process situation, he says, is the recent industrialization of private prisons in remote locations, which complicates attorney and family efforts to visit detained migrants.

“It is harder to represent someone if they’re housed out of state in the middle of the desert,” he explains.

Diamante has been prolific in his assistance and vocal on his views. He participates in legal fairs and town halls to provide pro bono consultations and seminars on immigrants’ rights. And he speaks publicly about his concerns for the fragility of the American legal system of checks and balances—the foundation of the democratic system.

“The new wave of immigration attorney-activists will be the vanguard of the defense of our Constitution and democratic rights,” Diamante says. “As the executive branch expands immigration internment camps and prepares for mass roundups, the legal fight is becoming more and more challenging and meaningful. It is only by channeling the majority population’s opposition to a rogue administration that the rights of immigrants will be secured.”

Diamante says he draws upon the words of numerous heroes in his practice, yet one particular quote sticks in his mind as of late:

Terrible things are happening outside. At any time of night and day, poor helpless people are being dragged out of their homes …. Families are torn apart; men, women and children are separated. Children come home from school to find that their parents have disappeared.

This famous quote by Anne Frank in 1943, he says, could be written about ICE raids today.

“In an effort to banish a section of the population from the U.S., the government violates its own regulations, the Constitution, national laws and international agreements.”

For the immigrants themselves, Diamante is launching and generating funds and grants for a 501c3 non-profit called the Immigration Dream Center. Focused on helping immigrants realize the American dream, it will build confidence and teach financial literacy, get immigrants active in their communities, and deliver vocational and educational opportunities by pairing immigrants and their children with mentors.

“The IDC’s goal is to assist the immigrant’s success as a self-reliant, legal resident that contributes to community and the economy without the need of government aid,” he says.

“As attorneys, we get to help immigrant families with their legal problems, but we lose the opportunity to get them involved in the community,” adds Diamante, whose childhood experience as a volunteer adolescent LAPD Explorer Scout had a tremendous impact on his life. “Volunteering in the community with others builds immigrants’ social skills and much-needed confidence.”

Diamante, whose downtown Los Angeles office is comprised of multiple attorneys and a small staff, plus the occasional presence of his Mariachi-loving 16-month daughter, Luna, holds his community in high regard, especially as he reaches his 25th anniversary of practice.

“Memories of all the families we have kept together against greatest of odds coupled with the outrage of the status quo motivate me to continue the good fight,” Diamante says. “I think there’s a lot of people who feel something similar.”