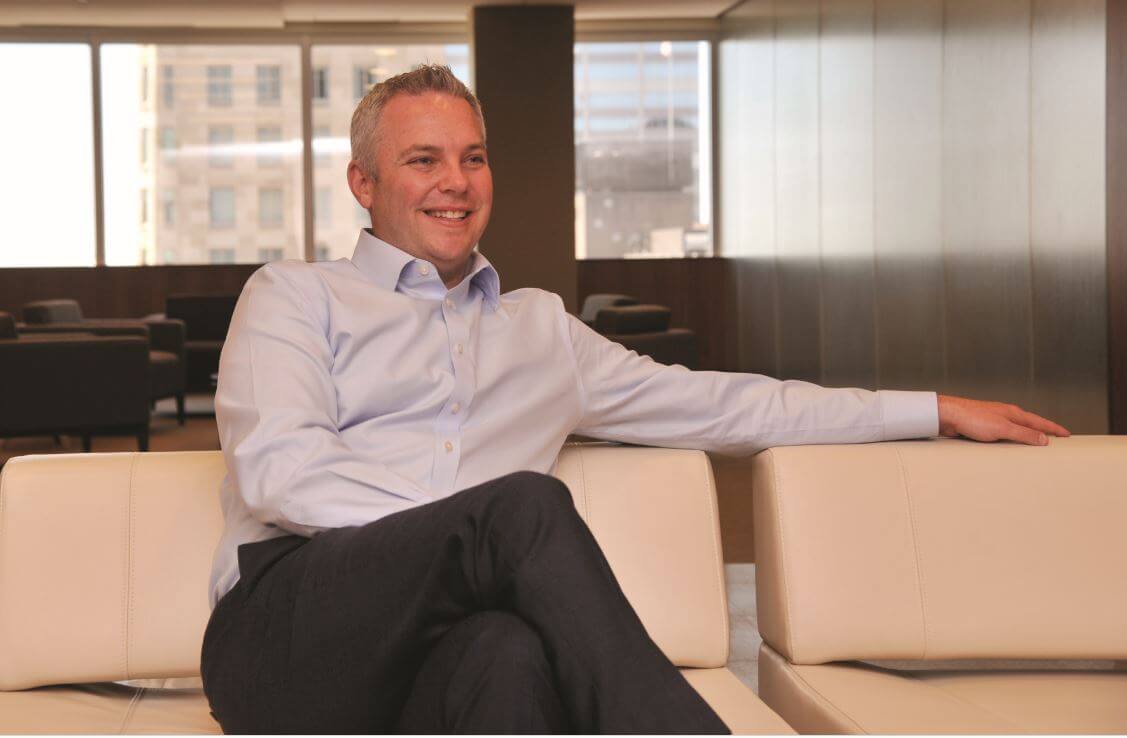 Born and raised in Omaha, Nebraska, Andrew Hansen had the unusual experience of attending high school at an all-boys boarding school run by Benedictine Monks. Hansen says the irony of attending school at a place called “Mount Michael” in Omaha is that there are no mountains in sight. He went on to Creighton University, where he earned his bachelor’s degree in biology with an eye to attending medical school.

Soon, Hansen found himself sitting in his first day of the MCAT review, and a few hours in, he realized his heart just wasn’t in it. He imagined how disappointed his parents would be with his decision to give up medicine, but it seemed there was nothing else to do in that moment but go out and contemplate his future over lunch and a beer. On the way, Hansen took a detour through the university’s law school and talked with the front desk clerk. He asked what he would need to apply to law school and learned that the LSAT was scheduled soon. He changed course and went on to graduate with his law degree from Boston University School of Law.

Hansen began his career at Oppenheimer Wolff & Donnelly LLP, where he distinguished himself as a strategic counselor and litigator in many complex matters, including intellectual property, advertising and consumer fraud cases. When Hansen first joined Oppenheimer, it was a 300-person firm with offices throughout the United States and in Europe, but downsized to fewer than 100 lawyers in its remaining Minneapolis office by 2003. Through office closures and a shifting economy, the attorneys at Oppenheimer pulled together and continued to provide the outstanding legal representation for which they were known. In a bid to expand the firm, its resources and repertoire of practice areas, Oppenheimer began seeking an opportunity for a merger in 2011. In late 2015, it identified Fox Rothschild LLP as a good fit, and in 2016, Oppenheimer officially became part of Fox Rothschild.

According to Hansen, Fox Rothschild was the right choice not only because of its national presence and reputation for legal excellence, but also because of its congenial firm culture and spirit of teamwork.

“I don’t think we lost a single Oppenheimer partner to a competitor in the years since 2003. We were a tight group who always helped one another. We found that Fox had a similar feel, with a ‘high tide lift s all boats’ type of thinking. When someone here calls from another office looking for help with a case, they get a call back. There is a willingness to do everything possible to help.”

We were a tight group who always helped one another. We found that Fox had a similar feel, with a ‘high tide lift s all boats’ type of thinking.

Hansen explained why this kind of firm culture is so important to attorneys and their clients. “We seem to have a lot of people who like working together, and I think that’s a good indication of how strong the cohesion of a firm is. It makes everyone’s job so much easier and less stressful when you know people are responsive, and you’re not fighting personality or political battles within the firm. You can focus on the job you’re here to do. We all went to law school to practice law.”

“In class actions, I only do defense; but, in other matters, I handle both sides. Working with both plaintiffs and defendants informs my thinking about all the things we need to prove in order to win a case. It helps me to look at a case from both sides when we’re starting out, and then think about where the pitfalls are. I can talk with the client at the outset about the path we’re going to take and why.”

Because the bulk of Hansen’s cases are large and complex, his expert team is critical to ensuring that they are managed efficiently and yield the best possible outcome.

“Working with teams allows me to handle multiple, large cases at the same time. I’ve been very fortunate at both Oppenheimer and Fox to work with really good people, who as associates and younger partners have done a great job managing cases, strategizing and executing those strategies.”

As a leader and co-chair of the class actions group, Hansen exhibits a willingness to empower people and then get out of the way.

“For a team to work, I think you have to have confidence in people to handle things. They need to have the room to be proactive in dealing with clients, dealing with opposing counsel, developing strategies, and knowing the end goals for a case and how to get there. Having such good folks on my side allows me to stay as busy as I am.”

Hansen’s legal wins are shaping the future legal landscape. With the advent of internet technology, advertising methods have changed, moving away from traditional print and TV media to more internet venues. As a consequence, more consumer purchases are also happening via internet, as evidenced by the unprecedented number of retail closures this year. (Credit Suisse projects that America will lose more than 147 million square feet of retail space in 2017, largely due to the market takeover by e-commerce giants like Amazon.) These cultural and economic changes have created a new genre of advertising, a new consumer climate, and the accompanying legal questions around issues like the use of intellectual property and what constitutes advertising fraud.

Hansen explained, “When someone does an internet search for a product, there are things companies do to influence where the ad shows up and what it says. They use language to manipulate and sometimes trick consumers. A prevalent tactic is when you do a search for a common, trademarked term or brand, and someone uses the same term, or a variation of the term, and you end up on the wrong website. They may put the language consumers are looking for in a bold or bigger font. Then the question arises over when that becomes trademark infringement or false advertising.”

He provided the example of a recent and nationally publicized case involving a claim by Tiffany & Co. that Costco was infringing upon its brand when it marketed jewelry it called Tiffany, online and in its stores.

“It would be akin to a car dealer selling rundown cars with a Porsche sign over their lot. Using trademarked brand names often gives value to the product, but the company that owns the trademark spent time and money to develop the trademark and its value. They should be able to protect it. I think it’s important that advertising and trademark usage have boundaries. We shouldn’t reward companies that are clearly basing their internet or any advertising on tricking consumers. Not everyone buying on the internet is sophisticated. There is a reason that companies use these advertising tactics which is, of course, because they work. But it’s not just about protecting consumers, but also companies that are advertising legitimately and have spent the time to build their brand. In this country, we are supposed to reward hard work.”

Hansen has further been successful at media crisis response. This is the barrage of inflammatory, one-sided press coverage that happens when a media outlet reports on a lawsuit that has been filed against a company alleged to have a defective or harmful product, or that the company has somehow acted improperly.

“I’ve had several instances where this situation has developed, and I have been able to coordinate with PR firms to deal with the media outlets and persuade them either not to run the story, or to correct a previous story. In most instances, it does not make much sense to bring a lawsuit against a media company. Instead, I have found that if you are armed with the right facts, present them correctly, and go to the right person, most media organizations are likely to adjust, correct or even abandon their reporting on an issue.”

Looking back on his early decision to walk out of the MCAT and sign up for the LSAT, Hansen credits his father, a longtime trial attorney who is still practicing in Nebraska, with teaching him that the key to satisfaction and longevity in this challenging profession is “working with people you like. My dad was the lead named partner at a firm for 30 years. One day, he decided it wasn’t a good fit for him anymore, and he went somewhere else. Building camaraderie, getting along with your colleagues and knowing everybody has everybody else’s back is critically important to success in the law. I give a lot of credit to the great teams of litigators I work with here and the contributions Fox makes that allow us to do great work for our clients.”