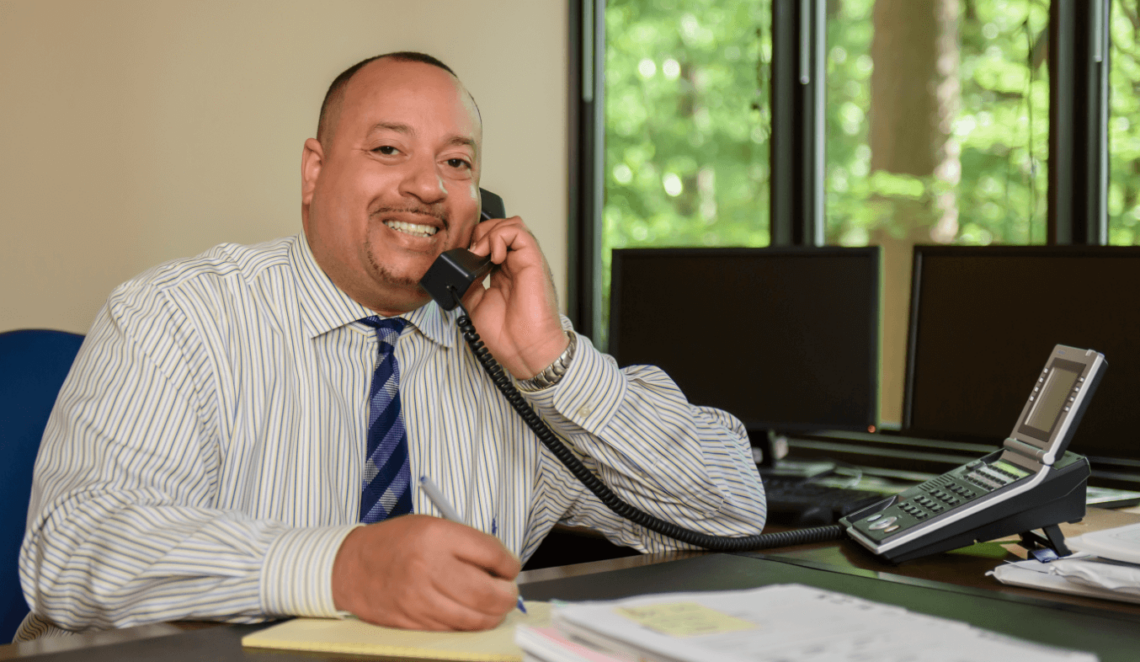 “I find I can often capsulize life lessons into sports metaphors. Sports can be a metaphor for life,” said Young Moore & Henderson litigator Brian Beverly.

The ever-affable Beverly, who is president of the Wake County Bar Association, can be found at association events, NCCU Law School fundraisers and other outings talking just as easily about the law as he does about sports.

He grew up in Solomons Island, a seaside community 90 miles from Baltimore, where he pledged allegiances to the Washington Redskins, the Baltimore Orioles and the Washington Wizards. He is an avid sports fan, having added UNC to his retinue.

“One of my favorite quotes is what Bum Phillips said about Bear Bryant – I think it translates well in litigation – he can take his’n and beat your’n and take your’n and beat his’n,” recited Beverly. “I can take either side of a dispute and advance it effectively. I’m not tied to one particular side or the other.”

Beverly is prone to use memorable ACC basketball and NFL games to make his point, peppering his dialogue with sports terms like “run with the ball” and “teamwork.”

“When a new case would come in, firm partner Nick Fountain would say, ‘Whose team are we on?’ I think that’s a good metaphor,” Beverly said. “We have to be a zealous advocate for our client regardless of which side of the issue we’re on.”

“I grew up on the water where hard work was a way of life,” said Beverly. While home for summers during college, he worked in the boat yards during the day – real men’s work, according to Beverly – and waited tables in the evening.

Beverly earned his Bachelor of Arts in economics from UNC before continuing onto North Carolina Central University Law School.

“I always wanted to be a lawyer. I don’t exactly know why. I didn’t know any lawyers growing up, and I can’t point to a TV show or particular experience that sparked my interest,” said Beverly. “The ability to impact situations and help people was probably what drew my attention.

“Law is a composite in many ways of social science, but it’s governed by rules,” he continued. “The law is open and flexible; you can maneuver it to reach your goals, but you’ve got to do it within the bounds of the set rules.”

As a summer associate at Young Moore, Beverly was groomed for litigation. “I like being in court. I’m a people person. I like interacting with jurors. I like the challenge of persuading folks who are not obligated to accept what it is I’m arguing.”

“I get the call when things have blown up and everyone is ready to sue each other or my client just got sued,” he laughed. “I find myself analyzing issues in terms of how it will play out on a sports field. Litigation is adversarial. You have to expect swift and certain return fire, and you’ve got to be prepared for it. You have to be fluid because you don’t know what you are going to find in the field. We have to be ready for the unexpected.”

Beverly tries to tell a story in the courtroom. He knows whoever tells the best story is more likely to persuade the fact finders.

“Litigators have to avoid falling into the common trap of becoming too acquainted with the case and its issues,” Beverly said. “You have to be able to craft a message that resonates with the people who have only been introduced to the case that day. By the time a case reaches trial, you may have worked on it for years. You have to condense those three years into a week or two, and do it in a way that the jurors and the judge can digest without losing the key points.”

Faith, family and friends are what Beverly says he values the most followed by volunteerism.

“I’m a volunteer. My dad gave a tremendous amount of his time and energy to helping people in need and he still does. That approach was ingrained in me early on. I’m going to be standing in the gap for those who may not have the ability to do it for themselves.”

As the current president of the Wake County Bar Association, he oversees a group of more than 2,300 attorneys. “My motivations are not ambition or remuneration for what I do,” he said. “It’s just an honor that people think I am worthy of this position and that they trust me enough to give me the keys for a year.”

Outside of the legal community, Beverly has contributed as a “Big” in Big Brothers/Big Sisters of the Triangle for the last six years to a young man he knows as C.J. C.J. just graduated from high school and is headed to Wake Tech.

Beverly said he and C.J. did a lot together, from attending ball games and amusement parks to watching movies and just playing catch. Altogether, it built a strong bond. “If you do those fun things and then relate it to something educational, that lends itself more to acceptance than forcing the education piece on them from the outset.”

Brian Beverly is a self-described student of African-American history. He’s always made a concerted effort to make sure his children, Quentin, 18, and Nia, 16, as well as C.J are exposed to the history of the civil rights movement.

“Those are things I want them to appreciate and understand. I wasn’t born of that era. I didn’t have those challenges but I certainly appreciate the struggle and it’s imperative that folks remember those struggles and don’t take them for granted,” said Beverly.

Beverly said that when he joined Young Moore, he knew of only one other young African-American male attorney practicing in Wake County at a big firm. “If I had to distinguish myself with an elevator speech, I would absolutely identify myself as an African- American litigator in Raleigh.”

“Litigation is a people business. Clients can sometimes be short-sighted about how important it is for their lawyers to relate to jurors and judges. It’s a very delicate topic to infuse race into it. I call it more background. It’s not limited to how I look. It’s a composite of my experiences that helps me fashion messages that resonate with folks we are going to need to sway. I have had success in counties that are commonly viewed as dangerous venues for corporate clients. They’re counties that are heavily minority and mostly poor, and that likely scare other litigators and clients alike.”

Beverly is a huge fan of the NFL and often draws lessons from the competition. “The game is four quarters. It’s 60 minutes; you can’t play 58 of them because what happens in the last two can dictate the outcome of the game.”

Beverly is also a proponent of emphasizing his own strengths over fashioning a strategy built to counter his opponent’s strengths. “You see it all the time in sports. Coaches fail to call their team’s best play or get the ball to their best player. They try to trick the opponent. My game plan is always going to stress the strengths of my case over worrying about what my opponent might do or say. If I’m going to lose, let me lose with my best argument – no matter how the other side might respond to it.”

Beverly then launched into an example, citing the end of the 2015 Super Bowl when Seattle didn’t hand the ball to their star running back, Marshawn Lynch and lost the game to New England. “Perfect example,” Beverly said. “I can’t remember who said it, but the best way I’ve heard it put is ‘Seattle was playing chess, and they should’ve been playing checkers.’”

The Cone of Silence

Brian Beverly’s girlfriend, Durham attorney Tamla Tymus, worked for a congressional homeland security committee and has a top-secret security clearance. Beverly’s father worked for the NSA for over 30 years. “They have an understanding of issues and discussion I can’t share in,” he said. “It’s hilarious. I never knew what Dad did at NSA and still don’t, but he can tell Tammi all about it. She’s quite proud of that fact.”