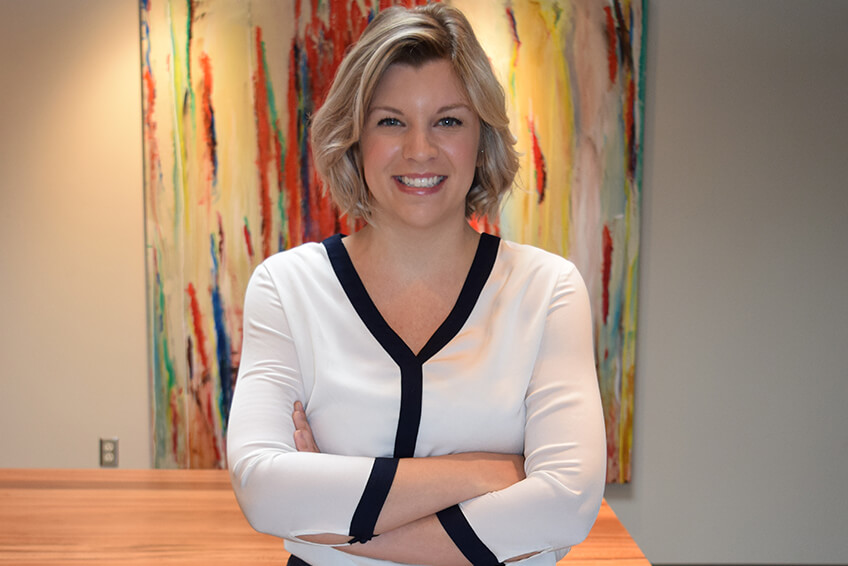 As a litigator of high-stakes cases from complex business issues and class actions to white-collar criminal matters, Cassandra Merrick is passionate about telling her clients’ stories. With all her charisma and spunk, she surely would have made it as a television journalist, but fortunately for her clients, she chose a career in law instead.

“I always loved writing and speaking with people, and after I participated in mock trial in high school, I had a moment when I thought about law. I initially stuck with my dream of being a journalist and went to the University of Missouri, where they have one of the top journalism undergraduate programs in the country. But I had this feeling there were other choices that better suited my skillset.”

Merrick returned home to the University of Minnesota for her law degree and M.A. in mass communications. “My motivations for practicing law were similar to those I had for journalism. I have a passion for telling people’s stories and making things right for them. I have a great enthusiasm for what I do every day, and there is not a day when I’m not excited about being at work. Right now, I’m preparing for a trial, and I’ve been in the office every weekend for months. But we all love being together and figuring out the strategies and intricacies of a case. I now realize this was really always my dream.”

Merrick initially practiced law alongside attorney Christopher Madel as a first-year associate. “The first time I second-chaired a case was with him. It was a week-long trial, and we won. I remember this feeling of incredulity that he’d give someone so young that opportunity. He’s a good read of people in and out of the courtroom, and he gets what juries want to see and hear. He’s a great person to learn from.”

Merrick’s advice to other young attorneys? “Find a sponsor, someone who will advocate and speak up for you, who will say, ‘This person is special.’ Whether you are male or female, it is critical in competing in a profession like ours.”

Now at MADEL PA with a dynamic team of lawyers hand-selected by Madel, Merrick has the daily joy of collaborating with colleagues who care deeply about the firm’s clients and their causes. She has contributed to winning strategies in two federal trademark cases during the past year, and she says that her relative inexperience is never seen by her teammates as an impediment.

“There’s definitely the feeling here that everybody’s contributions matter. Anybody can find the fact in the case that will win it for us. Frequently, we have the whole team meeting together, including our paralegals and assistants, chatting about our cases. Some of our best ideas come organically out of those conversations.”

As a young woman, it’s amazing to be working with a woman who really advocates for herself and empowers me to make my own choices.”

The firm’s managing partner, Jennifer Robbins, has been a special source of inspiration to Merrick. “Jenny is an incredible mentor to me. As a young woman, it’s amazing to be working with a woman who really advocates for herself and empowers me to make my own choices. She’s a great delegator. One thing I’ve learned from her is that you can succeed by being yourself. She has a great sense of humor, and she practices by letting that shine through.”

MADEL PA is made up of a group of highly skilled but down-to-earth professionals who always consider the human element in any legal case. “Anytime we’re hiring attorneys or case assistants here, we always think about, ‘Is this a real person who will read situations and have awareness of other people?’ It’s what matters most to us. The people who come to us with business issues are still people who have a great deal riding on the outcome. Their business is oft en a reflection of their life’s work, and we take it just as seriously as they do. We understand that your reputation at work and how well you do your job matter deeply. We want our clients to know that we see them as people we care about and for whom we want to get the best result.”

While Merrick dedicates long hours to advocating for her clients, she still reserves time for public service. She was named a North Star Lawyer by the Minnesota State Bar Association in 2016 for providing at least 50 hours of pro bono legal services. She is also a board member for Minnesota Special Hockey, an organization that fills a gap that Special Olympics is not able to fill. “Our mission is ‘Hockey is for Everyone.’ I have a cousin with an intellectual disability, so this is a cause I hold close.”

Life has a funny way of always coming full circle. During the last several years, Merrick has served as a mock trial assistant coach at her alma mater, Lakeville North High School. It is an opportunity for her to pay back some of the encouragement she received from her own coach, while fostering the next generation of zealous advocates and story tellers.

“Susan Clark was an incredible inspiration for me, and a cool woman who invested in all her students. I’m still grateful for that. My story goes back to the little journalist in me I never became. But I still have a great desire to tell people’s stories and get it right. With my journalism background, communication is critical to me, and I want to make sure my clients feel heard and that I’m in the moment with them. Clients come to us at MADEL specifically to try cases because we tell stories well.”