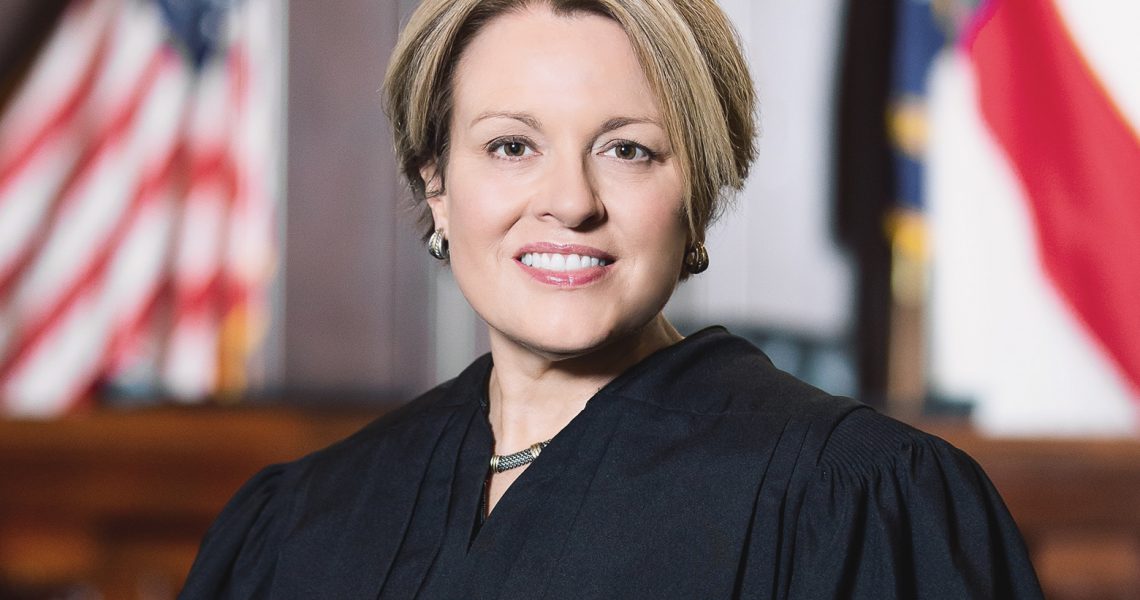 Donna Stroud was sworn in as chief judge of the NC Court of Appeals on January 1, 2021, replacing the iconic Linda McGee, who retired at the end of last year.  Stroud has been on the court since being elected in 2006.

Stroud was a founding partner of Gay, Stroud & Jackson, LLP.  She was a certified superior court mediator and a district court arbitrator.  She left the firm when she was elected as a district court judge in Wake County in 2004.

Chief Judge Stroud is a 2014 recipient of the General Federation of Women’s Club of North Carolina’s Women of Achievement Award.

On a crisp March morning, I met with the judge after one of her almost daily runs in Lake Benson Park in Garner.  (A knee wrecked by numerous marathons prevented me from running with her). So, of course, our conversation started with running.

DS: Being a judge is perhaps the most sedentary job known to man.  I try to stay active and fit and as healthy as I can. I have running groups that I run with, and that’s fun. I can think when I run. I sometimes write opinions in my head when I run or just plan the grocery list. (laughs) Whatever it is I’ve got to worry about that day.

BF: You touched on the sedentary nature of the job. I can’t even imagine the volume of reading you have to do.

DS: We get a big pile of briefs, and my son looks at it and says, ‘Oh my gosh, you have to read all that.’ Every case is a story about something that has happened to real people, and some of them are very tragic stories. We have the opportunity to get the law right and hope to help the people who are involved in the case to reach a resolution.

I love doing this.  With each case, I go into it completely neutral and follow the law where it goes. Sometimes it’s like figuring out a puzzle.

People think of judges as being judgmental.  I would say we definitely are not.  We don’t judge a case until we are in the position to do so and we have all of the information. Cases have to be brought to the court in a certain way.   The correct parties have to bring the case and it has to come before the judge properly before the judge can rule on it.

I’ve always thought of our courts as society’s emergency room.  People don’t want to go to an emergency room because it means you have a problem.  But if you have to go, you want them to have good doctors, and you want them to do their best to help you.  The doctors have to do triage and figure out who is the most injured or sick and deal with that first.  Courts do the same thing for legal problems.

BF: The court hears cases across a wide swath of matters.  Are there any issues that are near and dear to your heart?

DS: I did a lot of family law.  I was a family law judge when I was in district court. That is an area I enjoy.  A lot of attorneys run screaming from family law … which I understand … and some of us like it. I’m one of the odd people who like it.

In the juvenile cases involving abuse, neglect, and dependency, those are some of the most important cases we can do. People get excited about a multimillion-dollar case, and those are important. But a child’s life, I’m sorry,  I think that’s more important.  We have a chance to try to improve that situation and try to help families in crisis.

BF: Is it difficult being a judge right now with the clash of so many issues and deep divisions splitting the country?

DS: Our court has always been a very collegial court. Our judges get along very well, regardless of their political affiliation. I’m pleased to say that is still the case.  We see judges from other states when we go to our conferences for educational programs, and I’ve talked to judges from other states where the relations on the courts are horrific, I’m talking about judges throwing things and cursing. Just crazy stuff. North Carolina has been blessed that our judges have always worked very well together regardless of the political issues.  I hope we can always do that.

BF: Who are you?  Strip away that you are a mother, a wife, a judge, a daughter…who are you?

DS:  I’m a Christian. That would be the most basic thing, the most important thing. I’m a follower of Jesus. He’s my personal savior. I grew up in a Baptist Church, and my faith is very important to me.  I believe that being a judge is my calling.  I try to walk in the path that God would have me walk in and do some good in the world.