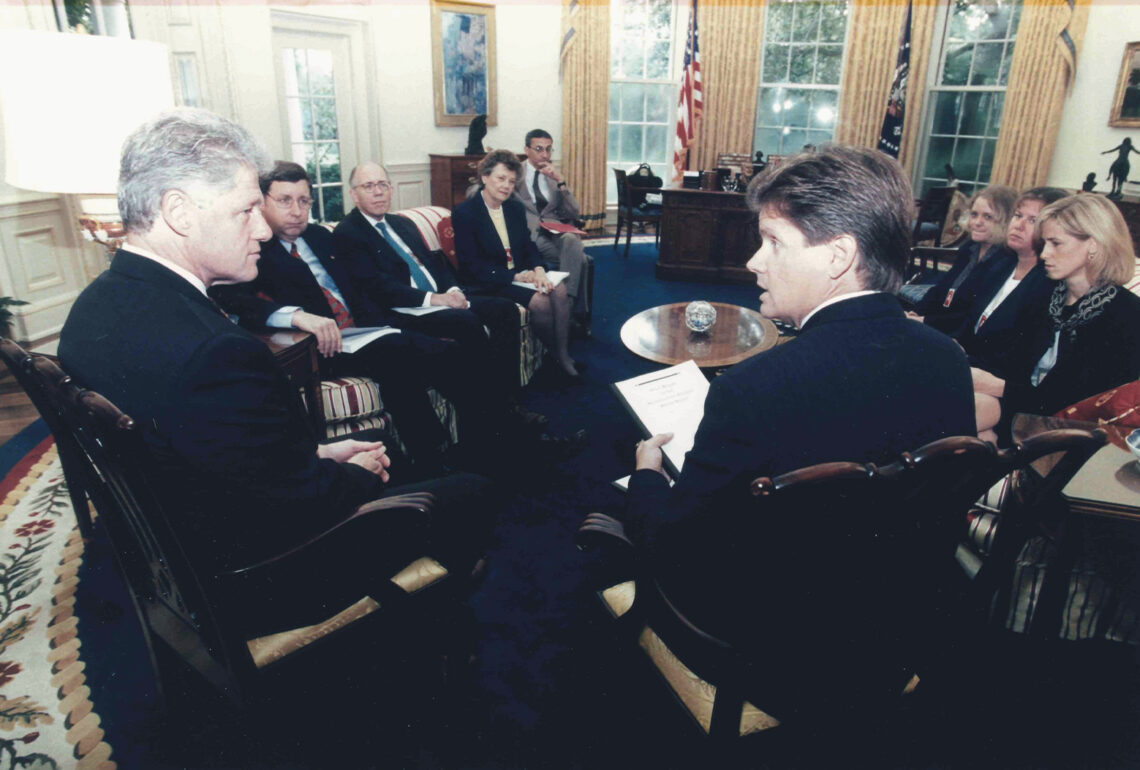 This is the second of a three-part series of the life and career of Chief Judge John R. Tunheim. In the first installment, “The Formative Years,” we covered Tunheim’s youth and his internship with Senator Humphrey.

Chief Judge John R. Tunheim was nominated to the federal district court by President Clinton in 1995. He has served as chief judge of the District of Minnesota since 2015; his term as chief judge expires July 1, 2022. This is the second installment of a three-part series about Chief Judge Tunheim’s life and career.

In the fall of 1980, after graduating from law school, John R. Tunheim began his legal career as a judicial clerk for U.S. District Court Judge Earl R. Larson. Judge Larson was a fellow University of Minnesota Law School alumni who was appointed to the bench by President John F. Kennedy in 1961. By the time Tunheim came on as a clerk, Judge Larson was on senior status after deciding some of the biggest cases of his era, including: Booker v. Special School District No. 1, which desegregated Minneapolis schools; Welsch v. Linkins, finding that civilly committed mentally ill and disabled patients were entitled to adequate treatment; and Honeywell Inc. v. Sperry Rand Corporation, which invalidated a 1964 patent and placed the invention of world’s first general-purpose electronic computer in the public domain.

Tunheim worked on some of Larson’s watershed cases, including a significant sex discrimination case in which Tunheim’s future colleague David Doty served as counsel. During Tunheim’s clerkship, Judge Larson also sat by designation on the Seventh and Ninth Circuit Courts of Appeals, a practice that Tunheim has embraced and continued in his own judicial career. Tunheim admired Judge Larson’s engagement with attorneys and his dedication to the job. When Judge Larson was recommended to the Eighth Circuit Court of Appeals by Minnesota Senator Eugene McCarthy, he turned the position down because he enjoyed the work of the district court too much.

Judge Larson—and his clerks—were often in the courthouse on weekends, the judge reading slip opinions while Tunheim and his co-clerk caught up on the week’s work. In the wake of the 1979 energy crisis, the federal building’s heat was turned off on the weekends and Tunheim fondly recalls that the faux fur fringe of the judge’s winter parka was singed—like a tiny forest fire—from years of smoking cigars in his frigid chambers. Tunheim and his co-clerk kept a coffee can full of water ready to douse the cigars that Judge Larson balanced on the bookshelf when they fell into, and ignited, the waste basket.

The clerkship afforded Tunheim the opportunity to work closely with Judge Larson, a wonderful man and mentor, on the details of each case. For Tunheim, clerking was an exceptional introduction to the practice of law and was the source of lifelong friendships with his fellow clerks, including future Minnesota Supreme Court Justice David Lillehaug, who worked in the chambers next door.

Tunheim declined a clerkship with Judge Gerald Heaney on the Eighth Circuit Court of Appeals in Duluth—deciding that it was more important to stay close to his wife, Kathy, in the Twin Cities—although Judge Heaney was a close friend and mentor.

Instead, Tunheim joined the St. Paul law firm of Oppenheimer, Wolff, Foster, Shepard and Donnelly in 1981. Tunheim worked in private litigation practice until 1984, when he joined the Office of the Minnesota Attorney General, first as an assistant attorney general and manager of the public affairs litigation division.

In 1985, Tunheim was appointed as the Minnesota solicitor general and was promoted in 1986 to the role of chief deputy attorney general. Tunheim served as chief deputy to Attorney General Hubert “Skip” Humphrey III for nearly 10 years, supervising the office’s legal services, chairing the management team, and representing the governor and state in civil and criminal proceedings. Tunheim approached the role from a pragmatic standpoint, juggling the crises of the day and striving to reach the fairest result in the myriad issues confronting the state—excellent preparation for his future on the bench.

As chief deputy attorney general, Tunheim became one of the state’s most experienced litigators at the U.S. Supreme Court, advocating for Minnesota on critical issues that continue to shape state policy today. On November 29, 1989, Tunheim made his first appearance at the Supreme Court, arguing on behalf of the state in the case of Hodgson v. State of Minnesota, which challenged the constitutionality of a Minnesota law requiring notice to the parents of a minor seeking an abortion. Tunheim emphasized the law’s judicial bypass provision, which established a judicial alternative when parental notice was not in the best interest of a mature minor. Justice Sandra Day O’Connor gave the decisive votes in the case, and the Court’s holding established that the parental notice provision was constitutional only by virtue of the law’s bypass mechanism.

On March 27, 1990, Tunheim returned to the High Court to argue in support of the State of Minnesota’s challenge to the federal Montgomery Amendment, which prohibited state governors from withholding the state’s National Guard members from active federal training duty outside of the United States. The amendment, passed in 1986, was a response to Democratic and Republican governors’ refusal to consent to the deployment of state National Guard personnel to training missions in Honduras. In Perpich v. U.S. Department of Defense, Tunheim argued that the Montgomery Amendment infringed on the militia training authorities reserved to the sates in Article I, Section 8, clause 16 of the Constitution. The state did not prevail in that case, however, Justice Scalia admitted to Tunheim that the case was tougher to decide than he had originally thought.

Tunheim was devoted to each of these cases and spent many hours poring over the factual and procedural records. The most difficult part of each argument was sitting through the cases scheduled earlier in the day, waiting for his case to be heard. Once the arguments started, Tunheim recalls those 30 minutes in conversation with the justices as the fastest 30 minutes of his career.

In addition to his storied litigation record, Tunheim’s early career was shaped by his work developing legal and civil processes in other arenas.

Tunheim served as a member of the Federal Practice Committee and Advisory Committee for Civil Justice Reform for the District of Minnesota, was a member of Governor Perpich’s Select Committee on the Impact of Drugs on Crime, Education, and Social Welfare, and in 1991, helped to found the government and public sector lawyers division of the American Bar Association.

Tunheim edited the book Office of the Attorney General: Powers and Duties—for which he received the President’s Distinguished Service Award from the National Association of Attorneys General, served as a delegate to the Democratic National Conventions in 1988 and 1992, and chaired the 1990 and 1991 Chief Deputies Conferences. In 1991, Tunheim was recognized as one of the most outstanding assistant attorneys general in the country when he was presented with the Marvin Award by the National Association of Attorneys General.

In December of that year, as the Soviet Union collapsed, Tunheim served as a delegate to Russia with the American Council of Young Political Leaders. Three months before the delegation’s arrival, Leningrad was renamed St. Petersburg. That trip inspired in Tunheim a lifelong interest in international rule of law and civil society initiatives.

In 1993, President William J. Clinton nominated Tunheim to serve as chairman of the U.S. Assassination Records Review Board, an independent federal agency created by the President John F. Kennedy Assassination Records Collection Act of 1992. The U.S. Senate confirmed Tunheim’s appointment in 1994. In this role, Tunheim oversaw the collection, review, and ultimate publication of over six million pages of materials related to President Kennedy’s assassination. In addition to reviewing U.S. government records, Tunheim negotiated with intelligence officials from Russia, Belarus, Cuba, and Mexico for the release of foreign governments’ records regarding Kennedy’s assassination, much of which was previously classified.

The board completed its collection of records by locating and obtaining records held by state governments and private citizens. The board released its final report in September 1998. In 1999, Tunheim was honored with the James Madison Award from the Coalition for Government Information for his diligent efforts to declassify intelligence and law enforcement records during his tenure on the board.