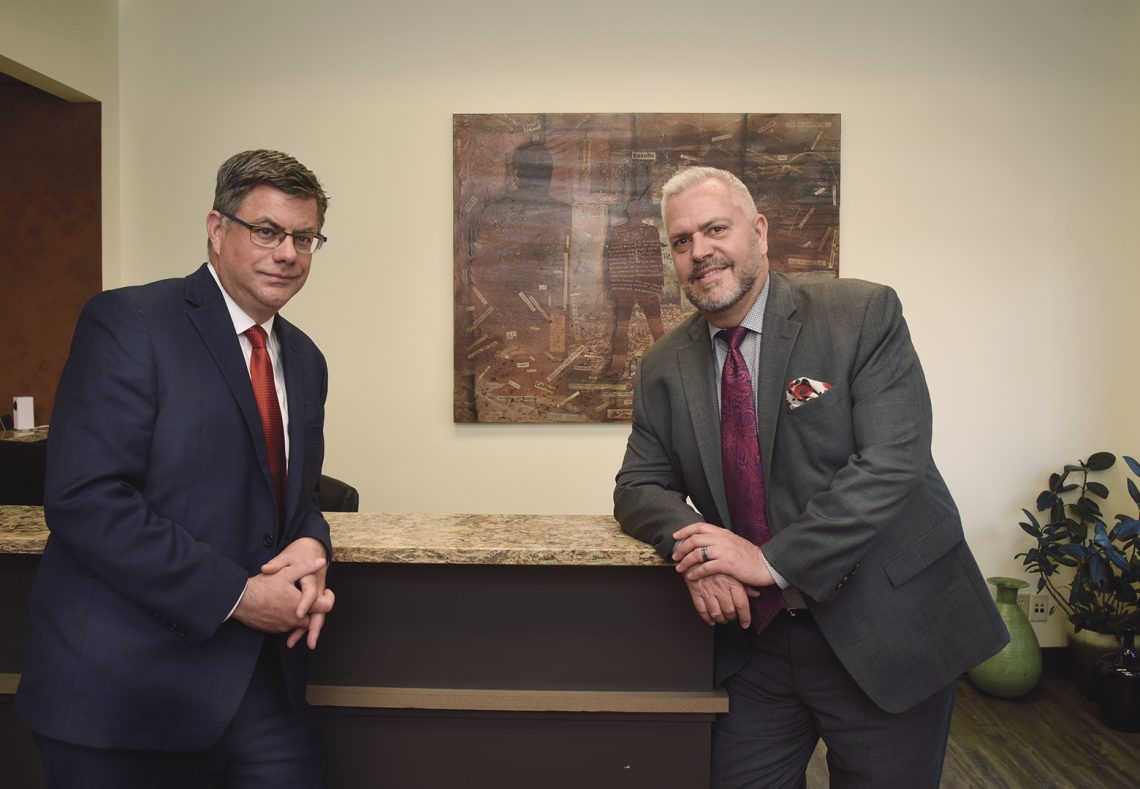 For nearly 20 years, Trepanier MacGillis Battina P.A. (TMB) has provided innovative solutions and outstanding courtroom advocacy to businesses, entrepreneurs and executives. The firm, which arose out of Craig W. Trepanier’s decision to go solo in 2001, has since grown to a team of seven attorneys with the expertise to resolve complex issues in the areas of business law, commercial litigation, real estate, and employment law.

Both attorneys graduated from the University of Minnesota Law School in 1994 before going their separate ways. They went on to represent corporate clients at different large firms before joining forces in 2016. They are active in the bar, have served on the MSBA labor and employment law section governing council and have been consistently selected for inclusion in the Minnesota Super Lawyer Magazine.

Before founding TMB, Trepanier primarily represented corporations in employment law matters. When Trepanier left big firm life, he continued to represent employers, but also began taking on high-level executives, salespersons and professionals such as accountants, architects, doctors and engineers. Meanwhile, Ella’s practice evolved from representing executives and professionals in a mid-sized firm to defending employers in employment law claims for a national management-side law firm for a decade.

Trepanier and Ella’s paths intersected again in 2016 when Ella joined the firm. Together, they have built a robust practice predicated on their ability to understand the needs of business executives. “We can speak the language of corporate America,” Ella said. “The executives we represent want lawyers who are familiar with representing corporations and understand their decision-making processes, objectives and motivations. We have represented large corporations our entire careers, so we bring that insight on behalf of individual executives who are accustomed to working with high-caliber law firms.”

Trepanier described a scenario in which he and Ella are sometimes called to provide counsel. “We enjoy getting referrals from big firms that are outside counsel to corporations being acquired. The buyer typically offers jobs to some of the executive team. The big firm can’t represent them because it represents the corporation in the transaction. They want to refer the executives to another firm, like TMB, that is competent and reputable. The corporation often pays the executive’s legal fees to hire us, and we work together to close the deal.”

Trepanier and Ella are sometimes called the “Blue Pencil Brothers” for their expertise in advising, negotiating and litigating non-compete agreements. The moniker derives from the Blue Pencil Doctrine, which allows judges in Minnesota to strike or rewrite overly broad non-compete provisions to make them reasonable.

One of the advantages of hiring a small firm with sophisticated corporate practitioners is its agility in handling fast-paced injunction motions arising out of non-compete and trade secrets disputes. In the big-firm environment, Ella said he “turned away more than half of the non-compete cases because of an ethical conflict. It’s been liberating working here, since we are constantly defending unfair competition claims brought against executives in transition. Big firms often can’t clear conflicts in time to jump into an emergency injunction.”

An explanation of Trepanier and Ella’s practice also requires an examination of what it is not. While TMB represents employees, it differs from a plaintiff’s employment law firm because it does not take many cases on a contingency-fee basis and rarely represents employees in pursuing claims of discrimination, harassment or wrongful termination. Instead, TMB advises executives on an hourly basis, typically involving their employment contracts, providing them with the same standard of service their employers receive from some of the best-known law firms in Minnesota.

Trepanier and Ella also distinguish themselves by offering an introductory legal consultation for a flat fee to meet with executives, business owners and other high-level professionals to review, explain and give advice on employment contracts, non-compete agreements, change-in-control provisions, stock option plans, bonus and commission plans, member control agreements, buy-sell agreements, and severance agreements. They have developed detailed questionnaires to help facilitate the process and provide maximum value during the consultation.

As the firm approaches its milestone 20th anniversary, both attorneys reflected on its culture of collaboration and legal excellence. “After going solo, I realized that I missed working with other talented attorneys,” Trepanier said. As the firm grows, Trepanier and Ella are mentoring TMB’s associate attorneys to help with their blossoming executive law practice. “It’s great to have other attorneys in the office to bounce ideas off, brainstorm and collaborate with.” Referencing Ella’s 2018 book entitled, “Executive Employment Law: A Handbook for Minnesota Executives,” he said, “John literally wrote the book on executive law.”

“Craig is better at dissecting, interpreting and revising contracts than anyone I have ever worked with,” said Ella. “I was hesitant to make this move initially, but I’m glad I did it. I’m pleased with the work environment and proud of the service TMB offers to the executive community and corporate counsel looking for a safe place to send a referral.”

Lawyers who cannot represent an executive due to ethical or philosophical conflicts within their firm can refer them to TMB with confidence, knowing they are in qualified and discrete hands, and will receive the highest standard of legal representation.

TMB’s executive law practice also complements the firm’s full range of business law services for entrepreneurs, business owners and corporations. Jim MacGillis, the firm’s president, stated, “Since many of our clients are closely held businesses, and many executives are also business owners, John and Craig’s executive law expertise fits nicely within our corporate and employment law capabilities.” Jim further noted that many of the firm’s executive clients go on to form new startup ventures which eventually become corporate clients of the firm.