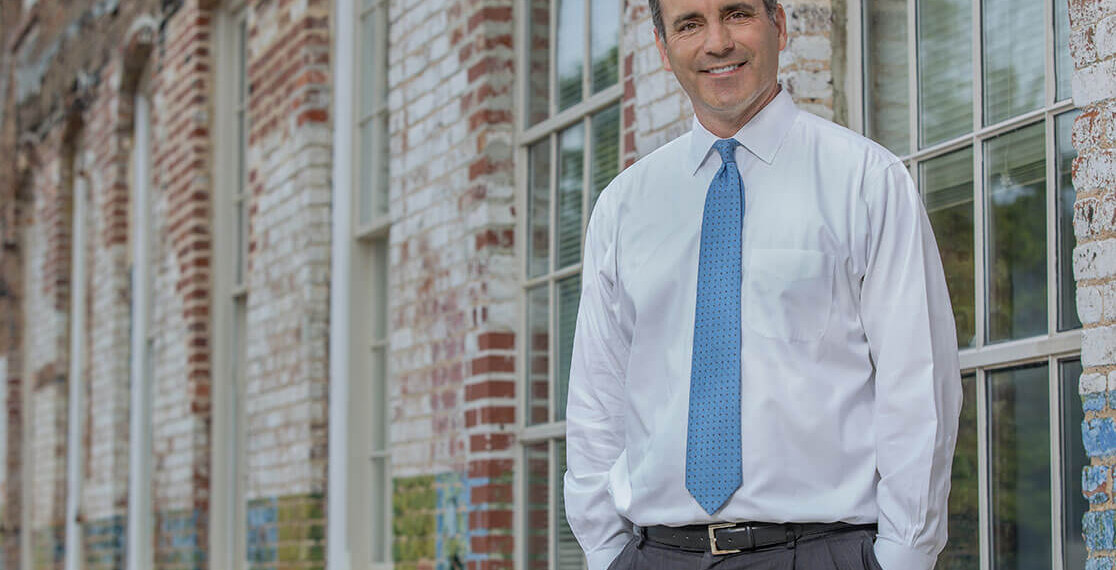 The elevator in the Wake County Courthouse emptied leaving only two riders. It was 2010 and then-Wake County assistant DA David Sherlin found himself riding alone with the mother of an 18-year-old Raleigh man who had recently been sentenced to life in prison for a 2008 gang-related murder. Sherlin was one of the prosecutors, and he had seen her in the courtroom throughout the trial.

“It was one of those moments as a lawyer, you step back and think about the human element of our jobs.”

Growing up in Raleigh, David Sherlin was imbued by his parents with the ideals of looking out for and taking care of others.

His father, Walt, served as a principal at several schools including, Daniels Middle School and Athens Drive High School before becoming an associate superintendent of the Wake County Public School System.

His mother, Mary Penn Sherlin, assisted adult patients with intellectual and developmental disabilities. Then she became a stay-at-home mom until returning to work in pharmaceutical sales.

Sherlin graduated from UNC with a degree in English in 1998. He then went to Capitol Hill where he worked for Senator Edwards. His first day on the job was working in the mail room, but he soon was promoted and focused on issues related to health care and Medicare. In August of 2001, he left Washington and returned to North Carolina to attend law school at NCCU.

Sherlin joined the Wake County DA’s office as an assistant in 2005. Working under DA Colon Willoughby, he prosecuted everything from drunk driving to first-degree murder.

Sherlin said Willoughby remains one of his mentors. “The first time I saw Colon do a cross-examination was such a teaching moment for me. He didn’t yell at or belittle the defendant. But he always found ways to advance his case while treating defendants and their attorneys with respect and dignity.”

“When I was an assistant DA, I had the chance to prosecute a lot of drunk driving cases where people had become victims totally at random. My current job allows me to continue that prosecutorial mindset and apply it to helping my clients in personal injury cases,” said Sherlin. He left the DA’s office in 2011 to practice personal injury law at Kirby & Holt. He, along with his law partner Mark Holt, launched Holt Sherlin in 2013.

David Sherlin is soft-spoken with a humble sincerity, attributes that are vital when discussing ligation strategy with clients.

“I do enjoy going to court,” said Sherlin, “but one of the most important parts of my job is advising clients about the risk of a settlement versus a trial. I often tell them ‘with anything you do in life, there’s some risk. The question becomes how much risk are you willing to take?’”

“In some cases, the risk is more significant because my clients are relying on settlement funds to help them the rest of their life with medical treatment, physical therapy and medication they couldn’t otherwise afford. In cases where a client has finished treatment, there may not be as much of a risk of what they can afford, but they have to look at the next six to eight months of their lives and ask themselves if they are willing to go through the litigation process,” explained Sherlin.

David Sherlin will be sworn in as President of the Wake County Bar Association in January succeeding Judge Ned Mangum. The two have been working together to increase membership. Of the 5,700 attorneys in the 1oth judicial district, about 2,500 are members of the WCBA.

“Forty percent of our members are under age 40. We want to see that number grow as the WCBA is a great way for young attorneys to get connected to our legal community. Our dues are $155 which is a very fair price for all of the CLE’s, social events, family activities, bar lunches, the Holiday Party and a host of other things the WCBA offers.”

Sherlin says he will be apolitical as WCBA President as the membership includes a spectrum of political views. That said, he did express concerns with recent attacks on the bench. “The lack of respect that has been shown toward the judiciary recently is troubling. Regardless of party affiliation, every time a ruling doesn’t fit one’s political agenda, the first instinct shouldn’t be to criticize it through the lens of politics,” said Sherlin.

“It may cause people to lose faith in the integrity of the bench and of the system itself. I tell my 10-year-old son who plays basketball that every time the ref calls a foul, it’s not because he wants the other team to win.”

Sherlin has taught those life-skills as a coach to his 10-year-old son, Austin, and the members of his basketball teams and his daughter, 12-year-old, Addison, and her soccer teams.

“Getting on a basketball court or a soccer field and spending an hour and a half coaching the kids and without the phone in my pocket is really special time for me,” said Sherlin.

Among the values Sherlin and his wife, Lise, a kindergarten teaching assistant at Lacy Elementary School, are teaching their kids is to be responsible for their behavior.

“First, you and only you are responsible for your behavior. Second, bad things will happen in life, and one of the lessons that sports teaches is that you don’t always win. The calls don’t always go your way. It’s no reason to stop; it’s more reason to keep moving forward. Third, treat people with kindness. In my opinion, there is nothing better than seeing a child be kind to someone else.”

Sherlin takes the same message to Camp Sea Gull and Camp Seafarer, YMCA camps in Arapahoe, North Carolina, where he is a member of Camp’s Council of Advisors.

“Camp Sea Gull empowers campers to learn skills through a very well-organized rank system. Through this, the kids learn time management skills and how to set goals for themselves. The result is seeing the confidence that a camper gains through learning that skill, whether it be sailing, waterskiing or how to hit a golf ball,” said Sherlin.

Sherlin often keeps in touch with his clients long after their cases are resolved. One of the people he has remained in contact with is Denise Bowling, the mother of Anthony Bowling, the victim in the 2008 gang-related murder case.

In December 2015, Sherlin saw a message on social media that a gingerbread house decorating party was being held at a Boys and Girls Club in southeast Raleigh in memory of Anthony Bowling. Bowling’s family hosted the event. Sherlin and Boz Zellinger, a former colleague from the DA’s office who assisted in the prosecution of the case, attended the event and surprised Bowling’s mother.

“When Denise saw us, the hug she gave was worth more than just about anything,” Sherlin recalled. “There weren’t many dry eyes there for a minute or two. More than anything, I wanted her to know that I still care.”