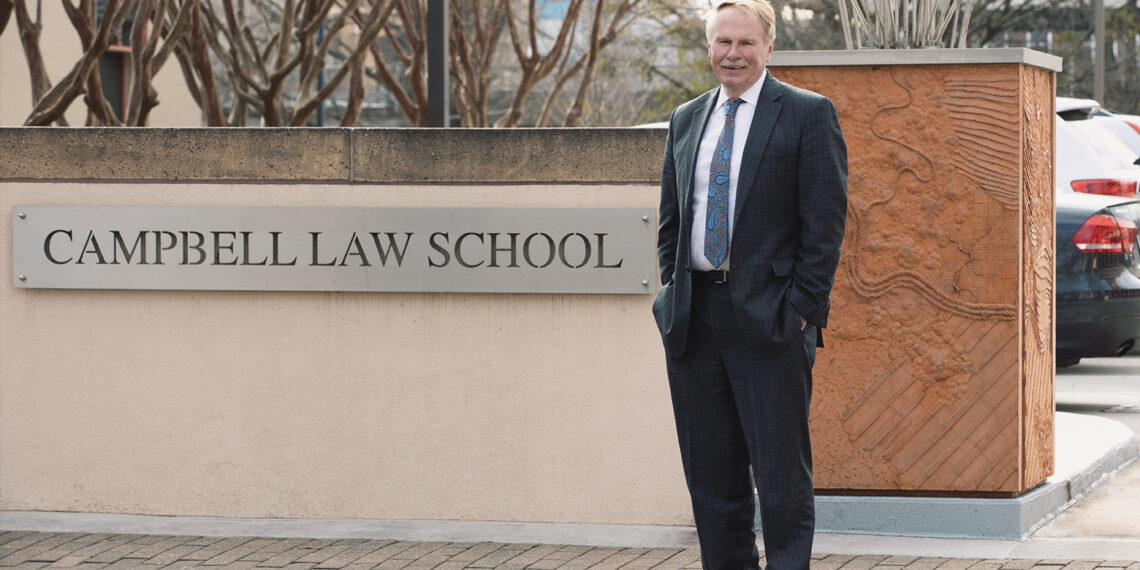 “I’m always looking for ways to create new and exciting opportunities for my students,” said Campbell University School of Law Dean J. Rich Leonard. “My mind is mostly in the future.”

Leonard has the longest tenure of any dean serving at North Carolina’s law schools. During his eight years as dean at the only law school in the state’s capital, the number of applications and students has grown, the curriculum has evolved, alumni engagement has risen, and the bar passage rate has climbed significantly.

The law school opened in 1976 at Campbell University’s main campus in Buies Creek, NC. In 2009, it relocated to downtown Raleigh.

When it came to hiring, its graduates didn’t get much love from the established Fayetteville Street law firms or the courts. ”That’s really changed, and I am really proud of that,” Leonard said. ”I’ve had calls in the last week from four state and federal judges looking for law clerks, and they only wanted to talk to Campbell students.”

Leonard recently commissioned a study on where the state’s district, superior, and appellate judges graduated from law school, and Campbell Law topped the list.

J. Rich Leonard (the J stands for Jerry, but he never uses it) was born in rural Davidson County. He was a Morehead Scholar at UNC-Chapel Hill, where he also earned a master’s degree in education. His initial chosen path was a career in higher education. When he discovered that people in the positions he aspired to had law degrees, he earned a Juris Doctor at Yale Law School. He then decided to pursue a career in law rather than academics.

“The first day I walked into that federal courtroom as a law clerk for Judge Frank Dupree, I thought, ‘Wow, this is really cool.’ The intellectual rigor, the dignity, and power of the place appealed to me. I thought if I have the chance to do this, I’ll do it for my whole career.”

In 1992, after more than a decade as the clerk of court for the Eastern District and a magistrate judge, he was appointed U.S. bankruptcy judge for the Eastern District of North Carolina. He served as chief judge from 1999 through 2006. In 2013, when Campbell Law School began hunting for a new dean, a search firm approached Leonard about the job. He demurred. They approached him again; he demurred again. The third time was the charm. He agreed to the interview, then accepted the job. His timing could not have been worse.

“It was a crisis. The admissions pool had fallen off the map. The number of people applying to law school was about half what it had been a few years before,” Leonard recounted.

He had been assured that the 2013 class would have 150 students, which was the school’s break-even point. “When 118 showed up, I asked, ‘Where’s the other bus?’” Leonard recalled. “I was told by main campus I had a huge hole in my budget, and they asked what my plans were to fix it.”

One of the reasons Campbell had hired Leonard was his ability to build teams and get a consensus. “I’m good at picking people. I think I’m a good judge of character. They know I have their back, and they know I’m not going to throw them under the bus. It frankly frees them up to be themselves and be bold and creative.”

Leonard and his team reviewed and tweaked the curriculum as well as recruiting and marketing. Full-ride scholarships were created as well as additional scholarships for veterans and Campbell undergraduates. The school started the FLEX-JD program so students could attend law school part-time. It now offers a certificate in patent law and other dual degrees and 3+3 programs with area colleges and universities.

A third semester of a required writing class was added in response to comments from practicing lawyers that recent law school grads were lousy writers. “I really do think the job for me is to keep the right balance between substance and practice,” said Leonard.

The school’s unofficial slogan is producing “practice-ready” lawyers in the heart of Raleigh.

“We sell Raleigh about as much as we sell the law school. We see the city as an extension of our campus,” said Leonard from his office balcony overlooking six nearby courthouses and the big law firms where his students are clerking and graduates are practicing.

A required course in trial advocacy is just one element of the “practice-ready” philosophy. “It’s the method by which we teach a set of skills. I tell students, ‘I don’t care if you use them in the courtroom, the boardroom, or a PTA meeting. We are teaching you to analyze a set of facts and make a presentation in your client’s best interest.’”

The school recently expanded its number of pro bono clinics to five, including the Innovate Capital Business Law Clinic, and a Family Law Clinic made possible by a donation from Carole Gailor.

“There’s no reason any student who goes through here can’t be out in the community practicing law with a very fine clinical professor as their supervisor in whatever area of law interests them,” added Leonard.

’START YOUR OWN PRACTICE’

A growing number of law school graduates are launching their own practices. “We teach a ‘Start Your Own Practice’ course for credit,” Leonard said. “We provide strong support for the students who know that they want to go that route.”

New lawyers have traditionally learned practice skills from mentors as they joined big firms. But the ones starting firms lack that resource. “Our ‘Connections Mentorship’ program has been nationally recognized and pairs third-year students with distinguished lawyers in the community in areas of common interest,” Leonard explained. “More and more, I find students come to law school for a couple of reasons. Many want to be a huge force for good in their community. They also want a work-life balance. They are perfectly aware that the tradeoff is that law will give them a comfortable existence, but it may not be the path to wealth.”

Leonard bears a remarkable likeness to Ted Turner. “People stop me in airports and call me Ted sometimes,” Leonard said with a laugh. Heck, they even have some of the same vocal mannerisms. But the comparisons only start there.

As Turner did with a moribund UHF station, Leonard has done with Campbell Law. Both are self-styled, self-confident, magnetic, and part swashbuckler. Leonard has a knack for making others comfortable as well. Students are at ease stopping him in the halls to chat. “I’m very comfortable in my own skin. I do enjoy people. I enjoy people who agree with me and those who don’t.”

As the face of Campbell Law, Leonard’s impact on the school can best be described as comfortable, informal, and at the same time, serious. “I want to walk in the front door and speak to everyone I meet. And I want everybody to see that the dean is here.”

A BIG WORLD OUT THERE

“My mind is mostly in the future. Technology is really going to drive law practices in ways that we don’t envision right now. It’s the biggest challenge in shaping the school’s curriculum and direction,” said Leonard.

“We’re getting ready to start up an Innovation Institute with Professor Kevin Lee at the helm to take on questions like, ‘Where is technology driving the practice? What role is artificial intelligence going to play in all of our lives? And how do we train our students to take advantage of this?’ They need to be ahead of the curve, understand it, and adapt to new uses in their practices.”

Leonard is expanding Campbell’s international footprint with competitive advocacy programs and partnerships with the University of Nottingham to offer LL.M. degrees for current law students, practicing judges, and NC attorneys. The University of Reading offers two advanced international certificates. The University of Cape Coast School of Law offers a study abroad program in sub-Saharan Africa. Campbell students have traveled to Vienna and Hong Kong to participate in commercial arbitration competitions.

“It’s a big, broad world out there, and it’s getting narrower every day. The students who have the skills to deal with people from other cultures are going to have a leg up,” said Leonard.

In the summer of 2019, Leonard took 16 students, many of whom had never been abroad, and three professors to Ghana for three weeks to study international legal issues.

“We landed in sub-Saharan Africa and set up at Cape Coast, which was Ghana’s colonial capital,” recalled Leonard. “It’s where the slave trade was headquartered for 300 years in all of the old castles and forts. The experience of walking through those places, standing at that door, trying to imagine what it would be like to be dragged through there in chains, away forever from your family and put on a ship, is overwhelming. You leave there in tears.”

“Some of those students will tell me they think of Ghana almost every single day, that it was the most important thing that happened in their lives. I think that’s really what education ought to be.”