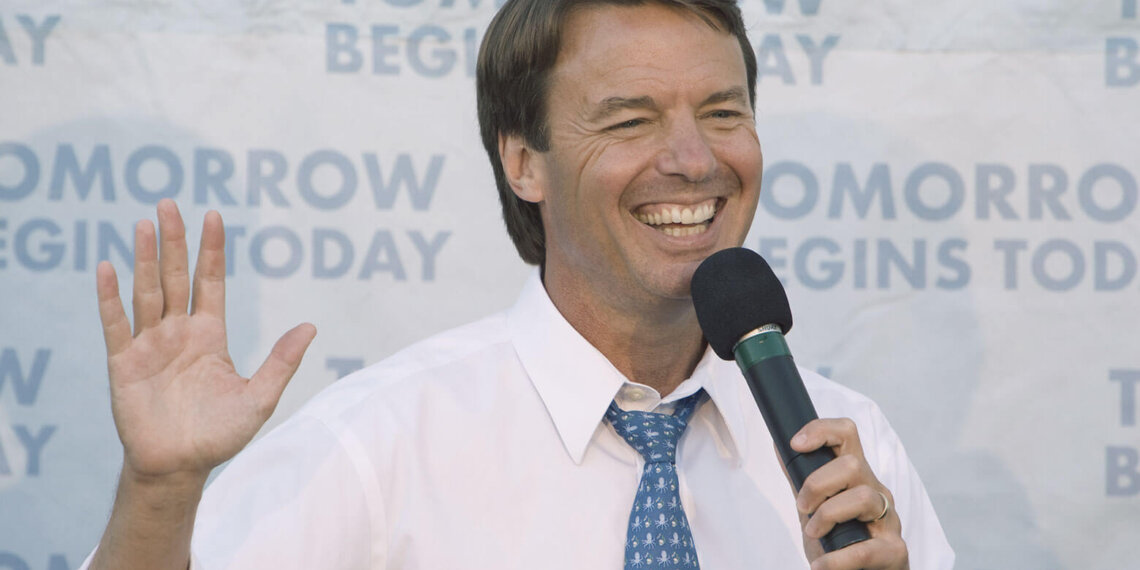 An Exclusive Interview with John Edwards

John Edwards is on a roll. He loves being back at his old law firm, Edwards Kirby, with partner and longtime friend David Kirby. He’s enjoying every minute practicing in the Raleigh office with his daughter, Cate. Attorney at Law Magazine caught up with Edwards hanging out with old friends at a reception hosted by his firm at the NCAJ’s annual convention this summer. And, having recovered from foot injuries, he is running again.

Edwards bounced into the Starbucks in Wilmington for our interview six years in the making. Relatively fit at 66-years-old, Edwards was in a well-worn golf shirt, comfortable shorts and running shoes due for replacement. He looked relaxed and happy, blending in with the other professionals down from the city to vacation.

We agreed in advance not to discuss his personal life.

We began the conversation swapping war stories about the Marine Corps, Philadelphia and other marathons we both ran.

Edwards: I used to run marathons. I’m not running marathons anymore. I usually do four to five miles and I do it five or six days a week, but I’m a lot slower than I used to run. But, I always feel better when I do it.

Edwards: Nothing like it. Running is the best stress relief on the planet.

Edwards is currently working with his daughter, Cate, representing thousands of U.S. sailors who were exposed to radiation while taking part in disaster relief efforts after a 9.0 earthquake and resulting tsunami struck Japan in 2011. These natural disasters triggered a meltdown at the Fukushima nuclear power plant in Japan. This includes sailors aboard the U.S.S. Ronald Reagan and dozens of other ships in the area who were participating in Operation Tomodachi to provide relief efforts to the Japanese people in need.

Edwards: They knew the tsunami was coming. It hit a nuclear power plant that was run by TEPCO (Tokyo Electric Power Company), a huge utility.

On the order of President Obama, a bunch of ships (U.S. Navy) left San Diego headed to Japan. When they got off the shore of Japan, they were close enough that when the meltdown occurred, they were exposed to radiation. Many of these sailors have had all kinds of medical problems as a result. We represent several hundred sailors in a case against TEPCO and General Electric because they designed and manufactured the components of the nuclear facility.

Edwards was elected to the U.S. Senate in 1998 as a Democrat from North Carolina. He chose not to run for re-election in 2004, and was the vice presidential nominee on the Democratic ticket with John Kerry that lost to George W. Bush and Dick Cheney, who were re-elected that year. In the 2008 Democratic presidential primaries, he finished a distant third to Barack Obama and Hillary Clinton. He retired from politics after those primaries.

Friedman: It’s got to be tough to be a Democrat in the Senate now because Senate Majority Leader Mitch McConnell won’t bring any of their bills to the floor.

Edwards: Yeah, it’s not healthy, it’s definitely not. There are many things that are happening in the country right now that are not healthy. The industry in Washington is politics. This world that you and I live in (North Carolina) feels like a much more stable, sane place as opposed to Washington.

In the vast majority of cases, the law works in a rational way. There are rules and everybody follows the rules, for the most part. In politics there are supposed to be rules, but it’s hard to feel them. People around you are just ignoring them. It’s a sad thing but it’s the truth.

Friedman: In the 2004 election, you talked about the Two Americas, the haves and the have nots. Does it seem like the chasm has gotten wider, especially when it comes to access to justice in North Carolina?

Edwards: (During the 2004 campaign) it became so clear to me as I was out there in the world talking to people in their houses and at events and comparing that in my own mind to what I saw in Washington. There are so many parallels between that and what happens in the legal system.

It seems like that gap has grown wider for North Carolinians trying to get access to justice. Somebody has to be a warrior for the little guy. There are great women and men across North Carolina who practice law and do everything they can to help those people who are so dependent on finding and being able to have access to lawyers and legal counsel who really care about them, who will stand up for them, and no matter who the fight is against and who the battle is against.

Occasionally, a case is sufficiently complicated and high profile so there’s a lot of power on the other side. If you’ve got enough money and enough power and enough resources that you can fight forever and hire a hundred lawyers and go through appeals, it happens. But, normal people can’t do that. They just can’t. They get run over. The legal system and the political system work very similarly, and it is so tilted in favor of power and wealth.

Friedman: You have a unique perspective on the law having been a lawyer as a part of the judicial branch of government; a member of the legislative branch in the Senate and as a candidate for president, the Executive Branch. Now that you’ve seen how the sausage is made, what are your thoughts?

Edwards: The factors that affect the creation of law are power, money and lobbyists. I remember thinking so many times when I was in the Senate, sitting in a meeting with a bunch of people who are advocating for a particular position saying, ‘Alright, this is what the law should do. This is what we think is needs to happen and blah, blah, blah.’

I remember thinking if my mom or my dad were sitting in the room, who’s speaking for them? It’s people with money and power who have a voice. Who is speaking for normal people who are not rich, who don’t have anything? What about the people who aren’t famous, but get up every day, take care of their kids, go to work and do all the things that makes America great?

Well, there’s only one choice, it’s the people they vote for, right? And if those people are not standing up for them, they don’t have a chance.

JURIES: A PERSONIFICATION OF DEMOCRACY

Friedman: On your website are the blurbs from the New York Times, USA Today and Washington Post with quotes such as, “an exceptionally talented lawyer, endowed with a prodigious work ethic;” “magic with jurors;” “legendary;” and “Never let him near a jury.”

In preparing for this interview, Triangle attorneys told me to ask you what is the secret to your success in the courtroom?

Edwards: I don’t think there is a secret. I know everybody thinks there must be some strategy or trick, but in my experience, that is just not true. I think what works is working your tail off making sure that you know the facts and the law in your particular case better than anybody else in the courtroom and always be prepared.

I know that seems simple and oh, that’s what lawyers who’ve had some success always will say, but I think it’s just the truth. And on the other side of our cases, they expect us to do our work. I think it’s just you be yourself and you do your work.

Friedman: That’s the answer I get from every lawyer. But you are regarded as an exceptional communicator.

Edwards: Well, I like people and I trust them. The people who are sitting on juries to me are the best decision makers you could ever have. I see juries as kind of personification of democracy.

Here you are; regular folks who grew up just like I did, who believe in the same things I believe in and it’s easy to talk to them. Just like I’m talking to you right now. It feels that way when I’m talking to a jury. I don’t talk at them. I never do that. I have as much respect for them as I would another lawyer or the best lawyer you’ve ever seen. They’re no different than us, it’s just that we do different jobs.

And so, the question is how do you communicate to them? You listen to them. You pay attention to how they’re reacting, and you just have a conversation and actually listen to what they’re signaling or telling you. If it’s jury selection, they can actually talk to you and get a real sense about you. I’m sorry, this is oversimplifying I guess, but it’s just what I think. The vast majority of juries want to do what they think’s right.

Friedman: Are you reading body language while you’re speaking to a jury?

Edwards: Well, some of it is not that hard. I mean, sometimes you can see when you’re talking and they’re folding their arms, alert and leaning this way, looking in a different direction and sometimes they’re paying really careful attention to what it is you have to say. So, you know, they’re listening. But most of it’s intuitive. I couldn’t probably write it down, “well this juror thinks this, and this jury thinks that.” I think this is a very complicated human interaction that occurs in a courtroom. People like to describe it as a drama. It doesn’t feel like drama to me. It feels like 12 normal people trying to figure out what to do and what’s right. And, each side gets to communicate with them in this adversarial system, and I think the level of communication and trust is hugely important.

Friedman: What do you do with your free time? Do you ever miss politics?

Edwards: It’s interesting, politics are not out of my world. I read a lot. I read the New York Times. I watch CNN. My television channels are ESPN and CNN. I’ve always loved sports, and in the last few years I’m back very interested in our politics. And, I’m a runner and as soon as you and I leave here, I’m going to walk over to Fleet Feet and get myself a new pair of running shoes.