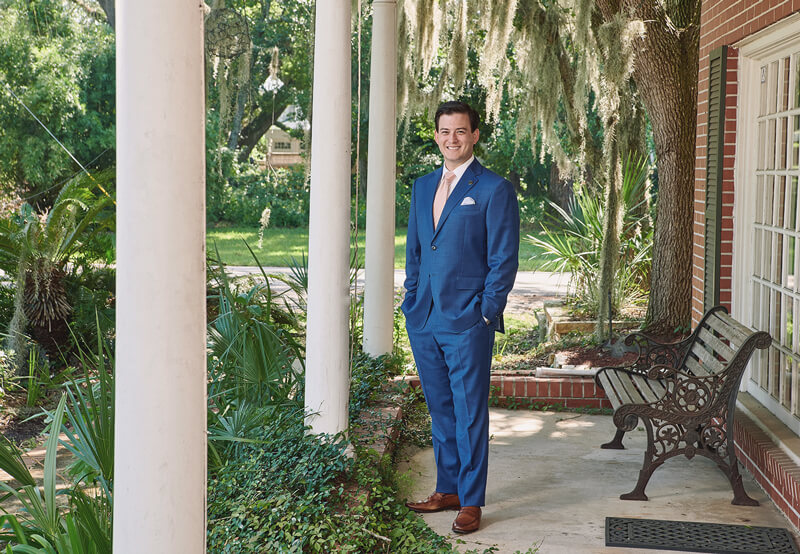 D. Finley Williams, director of the Criminal Division at Phillips & Hunt, has practiced law for less than a decade, but already has much to be proud of in his relatively short career. Williams has tried over 50 cases, with more than 25 of them before a jury. He is a board certified specialist in criminal trial law, making him the youngest of only 25 certified criminal trial lawyers in Duval County. The prestigious certification Williams achieved through dedication and hard work complements the board certifications in civil trial law and marital and family law held by the firm’s partners, John Phillips and Matt Hunt respectively. Williams’ proven criminal litigation prowess is a big accomplishment for a man who wasn’t sure he even wanted to be a trial lawyer.

“Growing up, I never liked speaking in front of people,” Williams says. “And now I do it for a career. It wasn’t until law school, after taking a mock trial class and forcing myself out of my comfort zone, that I discovered I really enjoyed it. Later on in law school, I interned at the state attorney’s office where I got my first real trial as the second chair. It was then that I was hooked.”

Williams joined Phillips & Hunt in 2018, reestablishing the firm’s criminal defense practice in the wake of another attorney who left the firm several months earlier. A mutual friend put him on to the opportunity and the firm that was seeking a criminal defense attorney. Williams did some research and met with the founder John Phillips and liked what he learned about the prominent law firm. Williams is based out of the Ortega office, but the firm boasts multiple locations in Jacksonville, as well as one in Georgia. In addition to criminal defense, the firm’s practice areas include personal injury, family law, business litigation, and high-profile matters.

“Everybody here takes work seriously, but we don’t take ourselves seriously,” Williams says. “We like to have fun and my boss, John, never misses an opportunity to participate in some fun competition. For example, the city did a call out for people to do a video promo to win Rolling Stones tickets. The firm made a video in an afternoon and ended up winning. It was a great time.”

Williams graduated from Florida Coastal School of Law and received his license to practice in 2012. Prior to coming to Phillips & Hunt, the third-generation Jacksonville native worked for nearly six years as an Assistant State Attorney, trying attempted murder, robbery, burglary and other cases throughout the Fourth Circuit. His experience as a prosecutor enabled him to develop an in-depth understanding of what it takes to convict someone in a criminal case. He brings that knowledge to the criminal defense cases he now handles, which include a wide variety of misdemeanor and felony matters.

In spite of his record of success on the high-profile cases he has handled so far, Williams doesn’t believe he has yet experienced a career-defining moment. However, he has had some particularly rewarding experiences. A recent case involved a client who was falsely accused of impersonating a police officer. Williams was able to use GPS evidence to prove that his client was on the other side of town when the crime occurred.

“Getting his acquittal was a big one for me and was particularly rewarding,” Williams says.

As someone who self admittedly didn’t like speaking in front of people, how did Williams develop his strong courtroom skills? He notes his experience watching more experienced trial lawyers when he was with the State Attorney’s Office to help build his abilities.

“As a visual learner, I took the opportunity to watch some really great prosecutors which was incredibly helpful,” he says. “I would then incorporate some of their style into my own presentation with a personal spin on it.”

Williams also had some help honing his courtroom presentations from another attorney, and one who is not afraid to tell him the truth. His wife Christina, who he met as an undergraduate at the University of Florida, and who practices insurance defense litigation at Taylor, Day, Grimm, & Boyd. She came to court to watch him try one of his first-ever cases.

“I got chastised,” Williams laughs. “She said I didn’t have enough inflection in my voice and was too preachy, so during my next trial I made some drastic changes. When Christina came to watch one of my last trials at the SAO she was very impressed.”

He attributes his friendly and easygoing nature to his success as a trial attorney. “I don’t have to force a smile in front of a jury,” Williams says. “When personality and smiles come easily, that genuineness comes across to the jury, which is very important. It creates rapport and builds trust with the jury that is vital to your credibility.”

Williams credits the example his parents set for his amicable disposition and his people skills. “Both of my parents are great people and have a lot of integrity. I was raised to give respect to everybody and those teachings are really important when it comes to the law. Our profession is contentious by nature. You can disagree and not make it personal. That needs to transcend through the profession.”

For this young and dynamic attorney, it is helping people through the law that he most enjoys. He notes that unless a person understands the law, which most clients don’t, it can be pretty confusing. “When you help somebody, they are really grateful. It makes you feel good,” he says.

In addition to working to achieve the best outcomes for his clients, Williams also believes that giving back is part of everybody’s obligation to society. Each year, with the other attorneys and staff at Phillips & Hunt, he participates in a back to school drive passing out school supplies to underprivileged students. During the Christmas holiday season, members of the firm also do a toy drive. Williams is also on the board of trustees of the Edna Sproull Williams Foundation, where they allocate funds to local charities supported by the organization.

OUTSIDE THE LEGAL PROFESSION

When Williams isn’t advocating for clients in the courtroom or working in the community, he enjoys rooting on the Jacksonville Jaguars and Florida Gators. Williams also golfs but admits to not practicing enough to be as good at it as he would like. Most importantly, his time away from the office is spent with his family.

Williams and his wife Christina have one son, Finley III, who is almost two years old. The couple also have a baby on the way—a girl who is due in November.

Born in Jacksonville, Williams says his children will be raised in the city as well. “I love Jacksonville,” he says. “That is why I came back here after school. It is a big city but has a small-town feel.”

For his future career, his wishes are straightforward. “I want this practice to blossom so I can continue helping people through tough times,” he says. “That is good enough for now.”