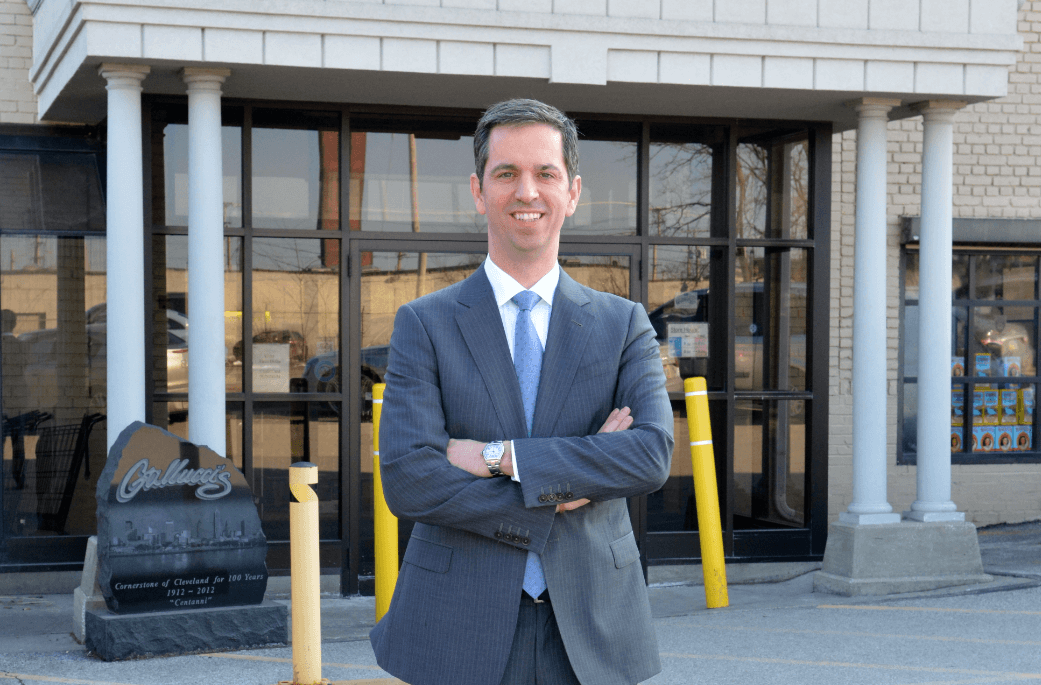 Frank Gallucci: It’s All About Family

Frank L. Gallucci may have come to the practice of the law by following in his father’s footsteps, but there is no question that he has forged his own career. A fulltime plaintiffs’ personal injury attorney, Gallucci devotes his hours to representing injured clients and fighting for their rights against insurance companies and their well-stacked lobbyist backing, all while managing Plevin & Gallucci.

From Grocer to Lawyer – A Father’s Legacy

In 1912, Frank L. Gallucci’s great grandfather opened an Italian import store in a Cleveland warehouse. The Gallucci family has always been devoted to upholding the family business. “When you were a young boy, you were expected to help your grandfather,” Gallucci said. “That’s how it was in 1912 and it remains that way today.”

Gallucci’s father dedicated every Saturday and at least one afternoon during the week to the store. As Gallucci’s father entered adulthood, he maintained that regimen, working two days a week alongside his own father. When he wasn’t on the clock, Gallucci’s father worked at the prosecutor’s office.

Eventually, Gallucci’s father began a side practice out of the grocery store working on workers’ compensation cases, often meeting with clients and signing their cases up on top of cases of tomato cans. When his new legal business became more stable, Gallucci’s father stepped down from the prosecutor’s office and opened up his own practice in 1974.

Finding His Own Path

It was never a question that Frank Gallucci would become an attorney. When his father passed away in his junior year of college, Gallucci took over the business aspect of the firm at the young age of 20. Following his graduation from Cleveland- Marshall College of Law in 2000, Gallucci cut his teeth at the prosecutor’s office and with Sam Sheppard retrial before joining the family business full time.

“I always wanted to be an attorney, I just didn’t know which path I wanted to take,” Gallucci said. He received the ins and outs of workers’ compensation from his father before his passing. Then, in 2005, lifelong friend and mentor, Leon Plevin, decided to partner with him, bringing his experience and expertise in personal injury and medical malpractice to the firm. Gallucci named Plevin as someone he always looked up to throughout his career, but his father remained his number one influence.

Over the next 20 years, Gallucci would shape the firm into a top tier plaintiff practice, eventually partnering with Plevin to form Plevin & Gallucci. Gallucci hasn’t forgotten the firm’s roots in the storeroom of the family grocery. He brings that work ethic and down-to-earth personable touch to each case.

“It may be cliché, but I love representing my clients,” he said. “Most people don’t really get an opportunity to see all that these people overcome.”

In 2000, in one of his earliest cases, Gallucci represented a woman who had suffered a lifting injury. As a result of the incident, she sustained injuries to her neck, back and shoulder. Her neck condition necessitated surgery and post-surgery she still had weakness and numbness down her left arm. At the time, she wasn’t earning much money, so the thought of the medical bills was daunting. Gallucci was able to get her lifelong, biweekly compensation for her injuries. While he admits the compensation isn’t much, her appreciation extends to the present. “Every Christmas, the first Christmas card I receive is from her, thanking me for helping her when she needed it most,” he said. “It’s a reminder of what positive work we can do here.”

On the flipside, Gallucci sees the power behind the insurance companies and special interests as a real obstacle. “Essentially, money is playing too large a role in our society. Insurance companies and large corporations are dictating laws and policies at the expense of innocent parties,” Gallucci explained. ”But if you ask any of the victims who sustained serious injuries or the families of those killed, they would take their good health or loved one they lost over any amount of money without a doubt.” Gallucci prides himself on searching for unique ways to solve problems. “It’s not always easy, but ideally, we try to find common ground that can benefit both sides of the table. Sometimes we have to step back and consider non-traditional approaches that may yield benefits for both sides.”

Workers’ compensation litigation is Gallucci’s underlying passion in his practice, emphasizing that these cases allow attorneys from both sides of the case to work together to find unique solutions.

“Employers’ concerns about premiums and claims history can be addressed, while at the same time, getting injured workers medical treatment and compensation,” he explained. “For the times that there is not a unique solution, the injured worker has the ability to take his or her case to a jury to get some finality.”

Gallucci is a compassionate, strong-willed advocate for his clients. His close-knit, hardworking family ethics carry over to the way he represents his clients. The key to finding balance between his work life and his personal life is that they both completely overlap one another.

“My next client can be anybody,” he said. “My neighbor, a friend’s child or someone I just met the day before. Whether at work or in my personal life, I want to surround myself, my co-workers and my family with people I respect.”

While it is the heartfelt thank you notes that truly touch Gallucci and remind him why he set out to practice law, the honors he has received from his colleagues and the legal community measure his success.

Recently, Gallucci was elected president of the Ohio Association for Justice’s executive committee. This honor, according to Gallucci, is the highest praise he has received throughout his career. “To be entrusted with legislative and other important decisions that help preserve and protect our Constitutional rights and civil justice system is an honor I am humbled and devoted to fulfill.”

Gallucci is the youngest attorney to hold this position within the history of the organization.

In addition to his recent election, Gallucci has received a smattering of recognitions from Crain’s Top 40 under 40 in 2012 to his selection as one of the Top 100 Injured Worker’s Attorneys in America.

Standing in any of their four offices today, it is hard to picture Gallucci’s father balancing legal briefs on cases of tomatoes. But, the work ethic forged in the backroom of the family business is carried on by Gallucci in his practice to this day.

As Gallucci looks ahead to the future, he hopes to expand his father’s firm to reach all of Ohio.