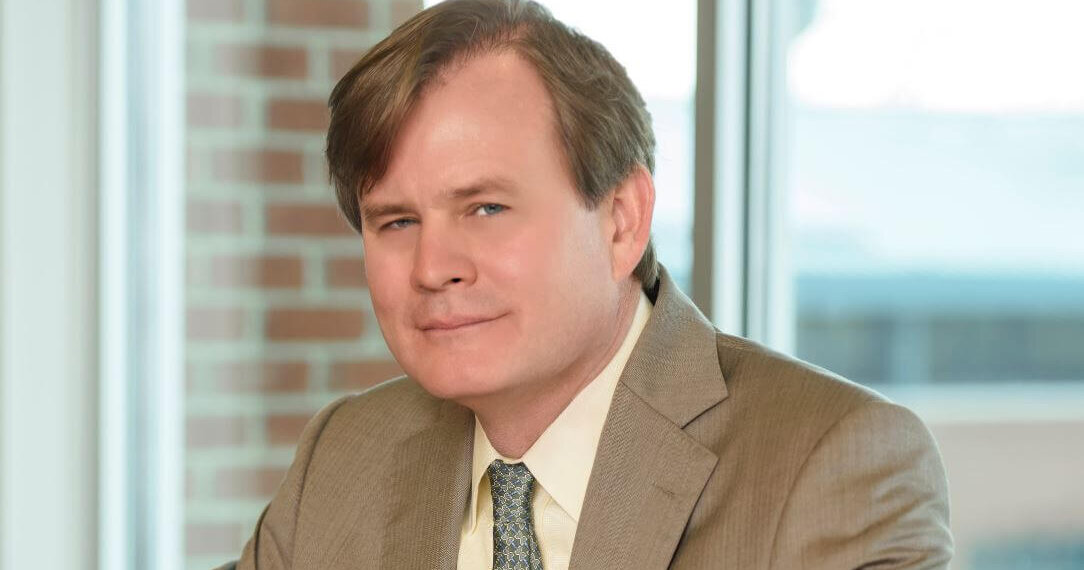 In Bruce Springsteen’s anthemic “Jungleland,” he sang about a “giant Exxon sign” that offered a beacon of hope to those trying to “make an honest stand.” Similarly the light cascading from James Scott Farrin’s massive building atop the Durham Bulls Athletic Park is meant to remind Durham residents that empowerment is just a phone call away.

This large, very real light started as a small spark in a client’s eyes. Farrin recalls a transformative meeting with a client after a favorable settlement early in his career as a plaintiff ’s lawyer. “I could see what this meant to my client. It was amazing. The light in his eyes. The smile on his face. It moved me. I remember thinking, aha, I have found an area of law that gives me a chance to connect with people and make a real difference in their lives. I knew then that I had found meaning in my career.”

There are now close to 40 lawyers and a support staff of 125 people in 14 offices across North Carolina working under the banner of the Law Offices of James Scott Farrin. Since 1997, when Farrin launched the firm with just one support person, it has recovered over half a billion dollars for over 25,000 clients. The firm handles workers’ compensation, land condemnation, Social Security disability, auto, truck and motorcycle accidents, and many other types of personal injury cases. In 2014 alone, the firm recovered over $60 million for over 2,600 clients.

“I am extremely ambitious and driven,” Farrin said, tucked comfortably into a couch in his office overlooking the ballpark. The ample office’s fine quality furnishings are understated and spare. No paeans to his professional success were visible. Farrin’s wife, Robin, designed the firm’s offices in his image.

James Scott Farrin is shy, soft-spoken, sincere, and by his own admission, introverted. He is an engaging conversationalist with a self-deprecating sense of humor and is given to deep thought, a byproduct of a degree in philosophy from Trinity College.

In the ongoing tension between the law as a profession or a business, Farrin squarely emphasizes the business side.

“What may be unique about us is that while we value the craft of lawyering and are very serious about it, we spend a whole lot of time also mastering the business craft,” he said. “One of the things we set out to do when we built this firm was to provide quality representation while also having an operation that mass-marketed and ran really well. We try to be just as good on the business side as on the legal side.

“We think a lot about how to do everything,” Farrin continued. “For example, we analyze the first call a lawyer has with a client as to what messages we want to communicate, what questions we need to ask, how we document, and whether we are communicating effectively. We analyze and try to find the best practice for everything from an operator’s greeting to how best to conduct a disbursal.”

Yearning to Be Grounded

Farrin has a yearning to be grounded, a common thread in life. His father, James Smith Farrin, worked for Colgate-Palmolive, Richardson-Vicks and Chesebrough- Ponds, selling cosmetics and soaps to people in foreign lands. When Farrin was a child, the family lived overseas and was uprooted often.

“I always wanted to be in the United States. I felt sort of deprived because we were missing all the sports and the activities and the TV shows and the cartoons,” recalled Farrin. “It was a good and bad experience. I got to see the world and I developed a worldview, but we were moving all the time so it was hard to maintain friendships.” Farrin’s life revolved around his parents and his four younger brothers and sisters

“One of the reasons I wound up wanting to go into the law was because I wanted to geographically control my fate. My children have the fortune or misfortune of going to the same school their entire life,” he laughed. Farrin has two teenage children, Ellie and Sarah, and two grown step-children, Courtney and Jason.

After graduating from Duke University School of Law, Farrin said he was lured to Los Angeles, partly by the aura of the hit TV show, “L.A. Law.” He spent five years with big litigation firms. “It was large company versus large company and whether you won or lost, the stock price hardly moved. It felt almost abstract to me.”

Farrin moved back to Durham where he felt more comfortable, more grounded.

Despite his statewide image as the king of late night “get a wreck, get a check” commercials, Farrin himself chooses to remain out of the limelight. Imagine “Man from U.N.C.L.E.” TV star Robert Vaughn as The Great and Powerful Oz and Farrin as the professor behind the curtain pulling all the chains and levers.

“A good business, to sustain itself, needs to reinvest and build for the long run. I guess it’s just in my DNA,” Farrin said.

When his firm won a huge settlement two years after it opened, Farrin chose not to pocket the money. Instead he used it for TV advertising with Vaughn as the company’s spokesman. The impact was immediate.

“It jump-started our firm. We were already growing and doing a lot of things well, but it took us to a completely different level.”

“I had to focus a lot of my efforts on building the firm, becoming a manager and stepping back from cases,” he explained. “My role is to support the other lawyers in our firm.” He occasionally provides strategic assistance to the firm’s lawyers.

The last major case Farrin handled was a high water mark for his career. He served as class counsel and as a member of the plaintiffs’ steering committee in the black farmer’s case, one of the largest civil rights cases in U.S. history. The case dealt with the USDA’s discrimination against African-American farmers. Farrin was involved with the case for seven years. In 2010, the federal government agreed to earmark $1.25 billion to settle claims by tens of thousands African-American farmers. “It was immensely satisfying,” said Farrin. “The judge’s opinion in that case was highly laudatory of the risk undertaken and quality of the work performed by counsel. Most of it was done by this firm or lawyers that we hired.”

No conversation about James Scott Farrin can begin or end without mentioning his ubiquitous TV commercials that air statewide. “TV commercials help people have ready access to lawyers to talk about their situations. It encourages them to call and get some help that they might not otherwise have taken advantage of,” said Farrin.

He is also well aware that some other lawyers look down on firms that do TV commercials and mass media advertising.

“I don’t think the legal community sees me in a legal setting very much. That may cause people to underestimate the firm’s quality of work because I don’t personally handle many cases. That is like saying any firm is only as good as its managing partner’s legal work, which is not the case.

“People may have discounted us just out of a bias because they didn’t like TV advertising and we were the most visible in that space,” he continued. “I think over time, however, the views have softened because people are more accepting of legal advertising in general and I think there is an increased realization that we do quality work.”

Early TV shoots with Farrin as his own spokesman did not go well and never made the airwaves. “I felt a little shy and embarrassed by the process. I didn’t want to spend a lot of my life, my time and my professional career working on becoming a better actor.”

Instead, Farrin chose to use the syndicated Robert Vaughn commercials. Vaughn’s commercials have obviously served the firm well, but Vaughn is now being phased out as the firm’s spokesman and is being replaced by Judge Joe Brown and Eric Pierpoint.

“A huge benefit of not being in my own commercials has been being able to have a normal life. I don’t have to face the bizarre situations where people are fawning over me because of TV ads. And I think it’s a lot better for my family. I like being a good father and a good husband and having a normal life is part of that.”

Part of that normal life now includes travel. For the first 15 years after college, Farrin refused to go abroad as a reaction to his nomadic childhood. Travel is now something he and his family value. They have traveled widely together. Sixteen-year-old daughter, Ellie, is studying abroad in Argentina for a year. Farrin and his wife take two international trips a year. “It’s now a big part of our life,” he said.

Farrin looks for attorneys who fit the mold, who can do things the Farrin Way. It’s not for everyone.

“The skills that are required to succeed here tend to be organization, discipline, comfort with technology, being driven, goal-oriented and having the ability to do quality work amidst a busy pace. We also greatly value good relationships with our adversaries. We spend a lot of time teaching a lawyer our way of doing things.

“In our earliest days we had a vision to become the most successful firm in North Carolina in our space and that was true when we were not the most successful firm in our building, let alone the city, county or state,” Farrin continued. “But there was always an audacity of ambition for us. And in striving to fulfill that vision, we’ve made a difference in the lives of thousands of clients. What could be better than that?”