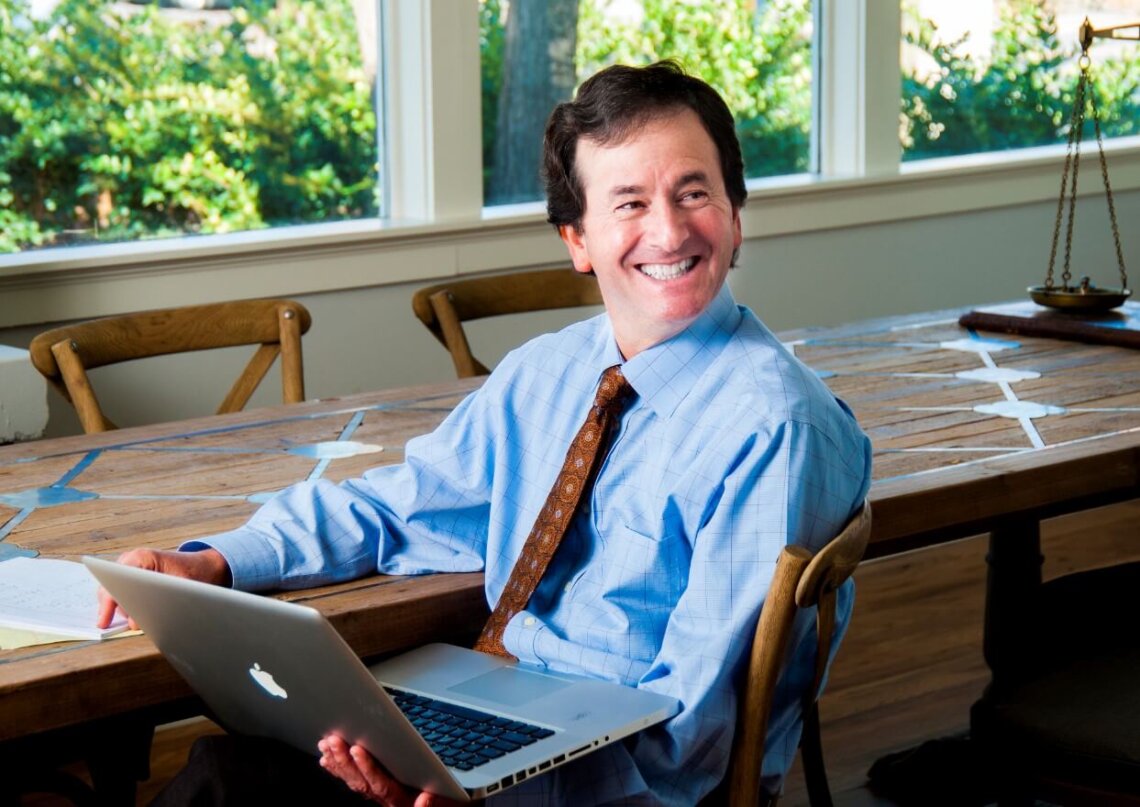 Whether a potential client hears of criminal defense attorney Jeffrey Brickman by a former client or is referred by another attorney, Brickman insists that his clients call him Jeff. “My parents gave me that name, I answer to it every day, and I want to make my clients immediately comfortable with who they’ve hired. No exceptions.”

Brickman’s engaging matter-of-fact manner has carried the Atlanta native from a successful prosecutorial career as an assistant district attorney, to the appointed DeKalb County district attorney to assistant United States attorney for the Northern District of Georgia to an equally exciting career as a criminal defense attorney. Brickman grinned when he recounted his very first client, who hired him within days of hanging out his shingle. A 13-year-old placed a dead snake in his neighbor’s mailbox. The parents tearfully advised Brickman that the neighbor was threatening to bring federal charges.

“I’m sitting across the table from this kid whose feet barely touch the ground. Our son was 10 at the time. I’m thinking, how would I handle this if this child was my son? You have to make good decisions, but this was anything but a federal case,” recalls Brickman. The case was immediately dismissed with the teen apologizing both to the neighbor and the U.S. Postal Inspection Service.

“The life of a criminal defense attorney is much more reactive and emotionally draining than that of a prosecutor,” Brickman says. “As a defense attorney, I juggle not only my clients’ array of emotions, but their families’, too. And that’s even before I enter the courtroom to deal with the prosecutor and the judge. Clients quickly realize that the mere fact of being accused of a crime will affect their life, liberty and their reputation. It’s a roller coaster life, but obtaining the right result is so satisfying,” which, he adds, is defined differently for each client. “There’s no one-size-fits-all result.”

“Prosecutors have great discretion in charging decisions, and once they pull the trigger, their goal is to prove their case, plain and simple. The effect that decision has on a defendant is not their primary concern, nor is personalizing the client or developing evidence in mitigation.”

Brickman notes that being a defense attorney requires wearing a variety of hats and making each one fit. “On any given day, I am an advocate, mediator, therapist, cheerleader and referee. You have to keep your clients calm because they are heading down a long and chaotic road.”

Brickman jokes that he decided to pursue a career in law when he realized that he would not make it as a professional tennis player. There was no aha moment telling him that he should be a trial lawyer. In undergraduate school at the University of Florida, he found himself gravitating toward law-related courses. “I had no idea I was headed to law school, and certainly didn’t think I’d end up spending the greater portion of my days in front of a jury box. I knew I loved to talk and could relate to anyone.”

Brickman had a lot of opportunity to become comfortable in front of juries. He received a Masters in Litigation from Emory University School of Law where he interned during the day at the DeKalb County District Attorney’s Office. Halfway through the program, then District Attorney Bob Wilson offered Brickman a full-time job. For the next eight years, Brickman prosecuted hundreds of cases, and developed his own personality in the courtroom. “Bob gave me the break I needed, made sure I appreciated that discretion should not be abused, and that my decisions would have lasting effects not only on the person charged but also the victims,” he recalls.

Brickman describes every courthouse as a family. “If you want to be a repeat guest at their house, you must behave. If you upset one of the family members, you can rest assured your next visit will not be a pleasant one.” So when Brickman arrives at the courthouse, he is not only on his best behavior, but makes sure that his clients also show their respect to the system. “My clients are dressed appropriately, their phones are off and their chewing gum has already been laid to rest in the trash can. Being familiar with your surroundings and respectful of the rules is essential,” he says, adding that the concepts of fair play and decency are also essential.

One day, a colleague called from the U.S. Attorney’s Office to advise him that there was an opening in the criminal division. “I loved the DA’s Office, but knew this was an opportunity I couldn’t refuse. So, I packed up my stuff and moved to 75 Spring Street.”

While an assistant U.S. attorney, he prosecuted a variety of crimes, including drug trafficking, fraud and crimes against children. “I learned a great deal at the U.S. Attorney’s Office. The stakes were high, and I was given great discretion. With a much lighter caseload, I had the luxury of taking more time to determine whether to bring charges, and if so, who to charge.”

In 2004, Brickman was appointed district attorney of DeKalb County. While his tenure was short, the experience was invaluable and Brickman insists that his time as DA not only made him a better lawyer, but provided him with a greater appreciation of exercising discretion wisely. “Just because you can doesn’t mean you should,” he says.

Because of his previous experience as a state and federal prosecutor, the transition to the defense was much easier, says Brickman. He already had a solid relationship with his new “opponents,” and had regularly appeared in front of the judges assigned to his cases. “I could easily anticipate the concerns of the other side,” he notes, having prosecuted hundreds of cases.

Over the years, Brickman has prosecuted a wide variety of defendants, but one of the most satisfying cases he worked on involved a person he never actually prosecuted. “Clarence Harrison was imprisoned for 17 years for a rape he didn’t commit. At the time he was prosecuted, DNA evidence was not yet admissible. While DA, the Georgia Innocence Project approached me and asked whether I would object to their having an independent lab conduct a DNA analysis on some evidence that was still in Clarence’s file. To me, that was a no brainer.” Harrison was immediately cleared. “That case really hit home for me, and reinforced just how careful prosecutors must be in making charging decisions. One hasty decision can have lasting effects.”

One of his most memorable, and perhaps emotional, cases as an assistant DA, however, was prosecuting a man in the early 1990s for armed robbery. During his investigation, Brickman learned that the defendant had also robbed his grandparents in the early 1960s at their grocery store. His grandfather has since passed away. Brickman said he got the “one-word verdict” he was looking for. That case clearly ranked as one of his most satisfying cases.

“My grandparents and parents worked their tails off to provide for and raise a loving family, and to always strive to do your best. Trying that case was a simple way of showing my respect for their hard work and love,” he says.

For the past several years, Brickman has served as an adjunct professor at Emory University College of Law and Georgia State University Law School, teaching advanced criminal litigation. “I believe the students get more out of classes led by someone who has actually practiced what they are teaching. It’s practical, hands on, and I insist that my students try and develop their own style in the courtroom.”

Brickman is in court three or four days a week and every day is a new challenge. However, what remains constant is the need to first earn and then gain his audience’s trust. “If I’m not trusted, that reflects negatively on my client. My adversaries quickly learn that I tell it like it is. I put the strengths and weaknesses on the table, and I am brutally honest.”

He adds that his sense of humor also helps. “I’ve seen some attorneys who never smile – that can’t be healthy.”

Brickman insists that being accessible, creative, realistic and a good listener are critical. “If you run your mouth, you’re not listening to what your client is saying. And in my world, I don’t get paid by the word.” He also never promises results. “With so much at stake, clients often develop a condition known as selective hearing. This condition can be cured only by candid dialogue between clients and counsel.”

Being a solo practitioner has worked well for Brickman. “The phone continues to ring, and my referral base is varied from longtime friends, judges and other attorneys in and outside of Georgia,” he says. No two days are the same as evidenced by his current caseload, which includes a murder case, a multistate federal fraud case and a variety of minor drug possession cases.

Working in his own practice also provides Brickman with the flexibility he craves. It allows him to set his own schedule, spend time with his family, cook his wife’s favorite meals, landscape, remain active in the community and play competitive tennis. “Perhaps an invitation to play in Wimbledon 2017 is still a possibility.”