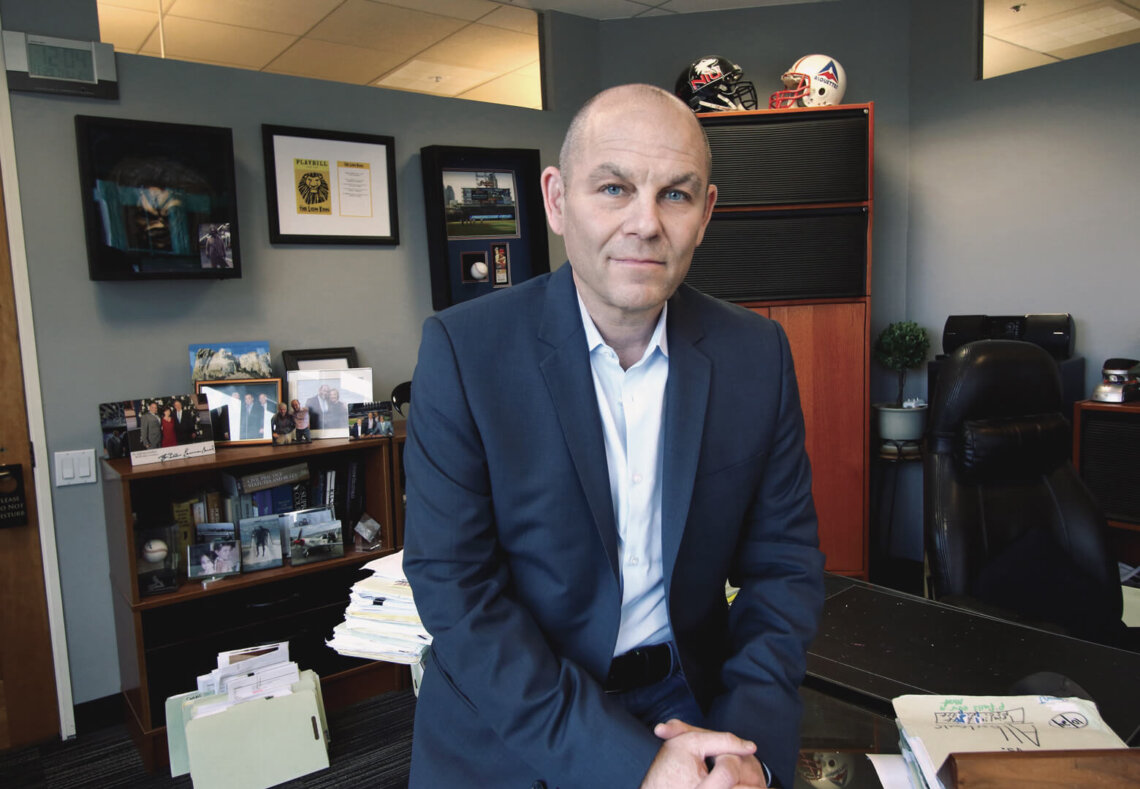 Attorney Jeffrey Lenkov has a lot of attributes in his wheelhouse. Fear of the unknown isn’t one of them. A partner in the Los Angeles office of Manning & Kass since 2000, Lenkov throughout his career has boldly gone where many attorneys don’t dare to venture: multiple seemingly unrelated disciplines inside the courtroom and out—practically on a daily basis.

“I’m not the typical lawyer who has only one specialty,” says Lenkov. “In the morning, I could be in a deposition on a food-borne illness case, then I’m consulting an employer on a termination. In the afternoon I could be attending a site inspection on a trucking accident fatality. And then in the evening I’m at a business dinner.”

THE THRILL OF IT ALL

Keeping things interesting was always in the plans, Lenkov says, but it took conscious effort to venture outside the lines of predefined practice that many lawyers find themselves in today.

“When I was a young lawyer I wanted to be able do many things,” he says. “I wanted to be able to shoot a 3-pointer and also dunk. So I sort of—out necessity or survival—built a practice defending different areas of law that most people would have shied away from.”

In those days, his experience was second to his attitude. Clients gave him opportunities based on his tenacity and dedication. He came by employment law when a client hired him for a case because of how impressed he was with Lenkov’s strategy, which he put together after days of studying for the initial client meeting. A “great result” was the outcome, and a flood of more cases followed.

“What I lacked in experience I compensated for in gall and confidence,” Lenkov explains. “A lot of lawyers would have shied away, but I thought, what a great opportunity. I am going to jump right in. I thought, I would work harder than the other side to win my case, and that’s what I did. The truth is that I had no other options but to work hard.”

What I lacked in experience I compensated for in gall and confidence.”

Those early cases led him to develop a formidable defense practice representing some of the nation’s top companies.

“It’s a truly diverse, multi-themed practice,” says Lenkov, who is also a certified players’ agent with the National Hockey League Players’ Association, a part owner of a Los Angeles team in a soccer league now in formation and an adjunct professor of sports law at Southwestern Law School. “The excitement and challenge to me is being multi-faceted.”

Does doing all of these different things dilute the expertise? Quite the opposite, Lenkov says, citing as an example the connection between business law and litigation.

“The business attorney and the litigator are usually exclusive, but I’ve been both,” he says. “When I’m putting a deal together on the business side, the advantage I have is that I can anticipate what could go wrong in litigation.”

Lenkov’s diverse skill set and exposure to unique opportunities has made him a go-to onair legal analyst for CBS and Fox stations covering current subjects in the news, as well as a sports commentator on various television networks. In addition, Lenkov worked with Fox to create “Pigskin Preview” starring Los Angeles Rams legend Vince Ferragamo and Hall of Famer Jackie Slater, and a baseball commentary show starring icons Frank Thomas and Pete Rose, which earned an Emmy for Fox.

“I hope I am a good role model for young law students to show them that you can do anything,” he says.

UP FOR A CHALLENGE

“Doing anything” doesn’t stop with his law practice. Outside the office, and away from the negotiating table and the courtroom, he applies his no-limits attitude to his “down time,” too.

This includes heli-skiing, running with the bulls, Notre Dame Football camp, skydiving, racing at the Indy 500, swimming with hammerhead sharks in the Galapagos Islands, walking on the wing of an airplane (“It sounds adventurous but it’s the scariest thing ever.”) and even playing a few characters in the Lion King on Broadway.

“You have one life so you have to push your limits,” he says.

The Lion King role answered a childhood calling to be in the theater, which Lenkov forsook in favor of a more practical career. He has channeled his love for the stage into being an advocate for a charity called Broadway Cares, which does good work in that community.

You have one life so you have to push your limits.”

Back home in Los Angeles, he founded the program Littles in Law, which aims to inspire at-risk teens to be great by placing them in jobs at law firms to expose them to careers in law and other high-aiming professions. Giving back is a big theme in his home, something he learned from his mother.

A Montreal native, Lenkov admits he didn’t have any real exposure to the field when he was a child.

“I come from a middle-class background,” he says, adding that in his early years he thought working in a retail store would be his highest level of achievement. “We didn’t know any attorneys growing up.”

His aspirations changed later in his college years.

“My mother was a force, and I think I inherited that ability to fight back,” he says. “And my father was incredibly hard working, which certainly impacted my siblings and me. I thought being a lawyer would be a magical special occupation. I always believed in the sanctity in the practice of law. It meant something, and the opportunities given to a lawyer can be so meaningful.”

With a bar set astronomical by his high-achieving siblings (one a Chicago attorney, another a successful television producer and another who is a New York business executive), he decided in college that law would pave the road to reaching his potential. And where else could he reach his potential other than California?

I always believed in the sanctity in the practice of law. It meant something, and the opportunities given to a lawyer can be so meaningful.”

“I thought, if I can make it here, I’ll really be able to fulfill all of my ambitions,” Lenkov says. He arrived in Los Angeles with no real connections but with limitless aspirations.

Today, his practice is not only varied, it’s also impactful. Lenkov had a big win in the California Supreme Court for his client, Knott’s Berry Farm. The case gave greater clarity to the assumption-of-risk doctrine. This was just one of the many pivotal wins he counts throughout his career, from high-exposure personal injury cases, to defending celebrities on employment matters to business transactions.

“In a general sense, those cases, experiences, clients and even my opponents made me who I am,” Lenkov says.

And after having defended so many cases over the years, he says, “It’s the personal experiences gained through the years of practice that would be most exemplary to me—not a ‘win’ on any particular case.”

It could be said that Lenkov’s entire law career is a win—for his clients and for his own search for personal growth.

“It’s a great practice and I am very thankful,” says Lenkov. “My family for sure would like me to slow down, but I’m just not wired that way.”