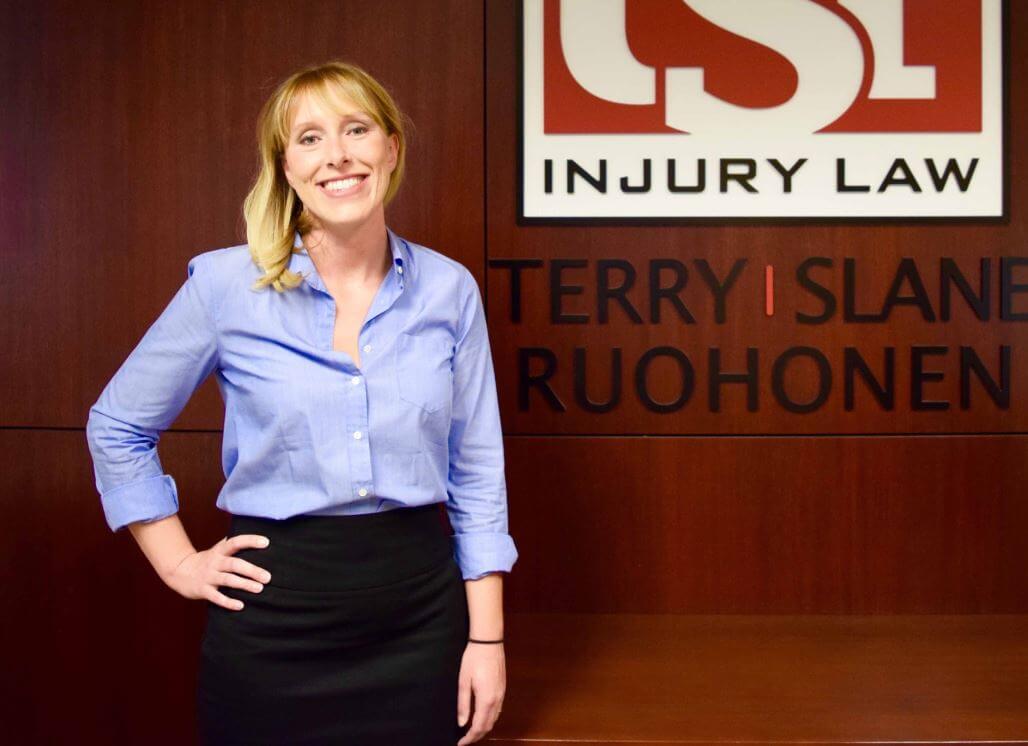 Jenny Olson: A Style Uniquely Her Own

Imagine the excitement of being a young trial lawyer practicing with one of the most aggressive personal injury firms in the region. Would it be different, somehow, if you were the only woman lawyer at the firm? Attorney Jenny Olson describes her experience at TSR Injury Law as one of absolute empowerment. She is respected there for her distinctive skills and perspective, and she is achieving trial victories with a practice style that is uniquely her own.

This young firebrand is a perfect fit in a firm culture known for its relentless representation of injured people. A family tragedy early in her life put Olson at the mercy of some unscrupulous lawyers and inspired in her a passion for righting society’s wrongs. “They seemed so powerful,” she remembered. “Too late, I met with a big firm to see if they could help me. Aft er that experience, I determined that nobody would ever roll over me again.” And a litigator was born.

While earning her law degree at Hamline University School of Law, Olson began working for a small personal injury firm made of up three women lawyers. She was fortunate to begin her career working on a winning case in which the jury awarded the plaintiff $2.1 million. “It was huge to be a part of that right away, and I learned so much. Our client had been catastrophically injured by a power company truck, and the insurance company was offering him nothing. It didn’t even feel like work to me. It just felt like I was doing what was right.”

Recognizing her robust passion for the courtroom, Olson’s employer introduced her to Nate Bjerke at TSR Injury Law. “She said, ‘I think you should look into getting into a place like TSR where you could learn from the best.’” A week later, Olson received an invitation to join the firm, making her the only female attorney among their ranks.

In her three years with TSR, Olson said that her colleagues have become both mentors and friends. She also admits that there was an adjustment period for everyone in the beginning. “At first, a lot of my training was based on being a man. But women worry about different things. I had to take the training and tweak it in a way that would work better for me. At first they might say, ‘Why tweak that?’ So I would say, ‘Let me tell you what happens when a woman says that and how she is received. I’m not a 45-year-old guy with my name on the building. I have to find a different way.’ My colleagues have really supported me in being me.”

Like her colleagues, Olson is a warrior for justice. Just this year, she has tried five cases and achieved two verdicts in excess of the policy limits. “In law school I was so in the books, I thought being a good lawyer was about being the smartest, finding the magic legal argument. I’ve learned it’s so much more than that. It’s a lot messier than that, but in a good way. It’s about making sense of someone’s life and what they’ve lost, and some of the law, too. Then you have to get down in the muck of it all, and fight for them. It’s a lot of hard work, but it’s so rewarding.”

While Olson is happy to be known as a zealous champion for the rights of injured people, she is also glad to be able to do it in a way that honors her true self. “I’m goofy, nerdy and feminine, and I feel fully embraced by this place,” she said. “I’m not a caricature of what an aggressive litigator is supposed to look like. It’s fun being a young woman with an opportunity to try a lot of cases, and it’s fun to be this as myself.”