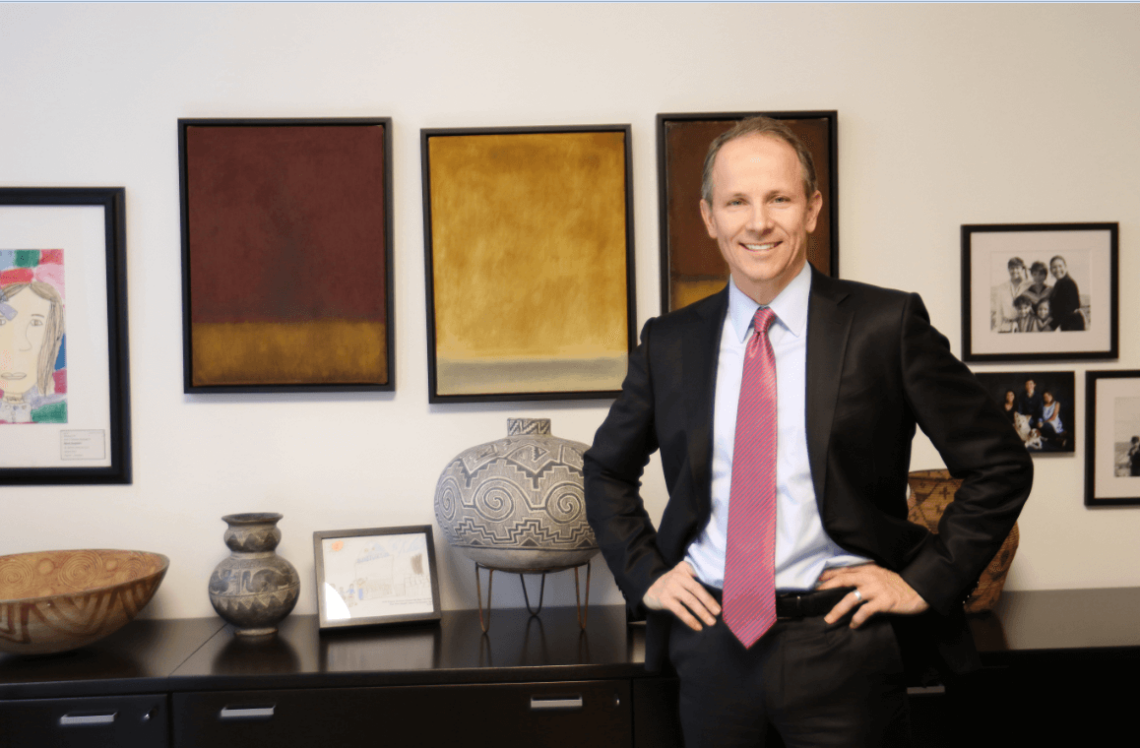 John Hueston: A Sound Mind In A Sound Body

Ten years ago, a jury convicted key Enron executives of fraud and John Hueston, an assistant U.S. attorney and lead prosecutor on the Enron task force, was catapulted into national prominence and rarified legal circles.

The collapse of Enron in 2001 had triggered national outrage. For years, it appeared that no one would be held accountable for the economic devastation of thousands of Enron employees. Then, when the Enron task force prevailed May 25, 2006, thousands who had lost their jobs, life savings, pensions and homes found justice. Across the country, the convictions were seen as proof that the U.S. government will not sit idly by when corporate titans betray the trust of the people.

“That was a unique and irreplaceable part of my career and there are definitely lessons still to be learned from Enron,” Hueston said. “Unfortunately, I think that’s history we’re in the process of repeating.”

The guilty verdicts were the culmination of four years of hard work, but in reality, Hueston had been moving toward that moment his whole professional life.

More than 20 years earlier, as a senior at Dartmouth College, Hueston was a leader of the anti-apartheid movement pushing the Ivy League school to divest from South Africa. A key leader of a massive student takeover of the administration building, Hueston occupied the president’s office and made a case that garnered national coverage of the event. It also forced a meeting with the college president — who had resolutely ignored student demands — and soon saw the school divest as a result of undergraduate activism.

“That was when I knew,” he said. “I realized I could make a difference through advocacy; the law was going to be my calling.”

Hueston turned down Harvard Law School for Yale, infuriating his mother, and then clerked for civil rights legend U.S. Circuit Court of Appeals Judge Frank M. Johnson, Jr. Johnson, who authored groundbreaking decisions, including one permitting the Selma to Montgomery march, became Hueston’s most important mentor and urged him to become a federal prosecutor.

That experience in Montgomery, Alabama, along with his time at the U.S. Attorney’s Office, shaped a career that would focus on high-impact litigation that makes a difference not just to individual clients, but to broader society.

In the 10 years since Enron, Hueston has not rested on his laurels. After 13 years as a prosecutor, he entered private practice and in January 2015, founded a hot new trial boutique, Hueston Hennigan LLP, with Brian Hennigan and five founding partners.

Since opening its doors, the firm has accumulated an impressive number of recognitions as well as a slew of individual accolades for its partners and associates, including Hueston’s California Lawyer of the Year Award for his work in collecting $5.15 billion in an environmental case against Kerr McGee and Anadarko.

In little more than a year, Hueston and his namesake firm are handling high-profile cases — and winning them. In the last six months, Hueston, along with partner Alexander Giza, led a successful intellectual property jury trial against LG Electronics and won a lengthy arbitration involving theft of trade secrets; Hennigan succeeded in having California’s first-ever corporate murder charges against a client dismissed; and Hueston Hennigan partners Robert Klieger, Marshall Camp and Douglas Dixon prevailed in the high-profile Sumner Redstone competency case after a single day of trial.

Peter Zeughauser of Zeughauser Group has worked with Hueston and the team on the firm’s strategic growth. “Their success can be attributed to them quickly assembling a critical mass of top-flight trial lawyers to launch the firm,” Zeughauser said. “A little over a year since they opened their doors, they have become one of the preeminent trial practices in the country, and they are on a fast track to the top of the list. Clients have been reaching out to them for bet-the-company work disputes. They have consistently delivered results that beat expectations. They know how to go for the jugular, which is always what distinguishes the best from the rest.”

“Success has always come when I’m working with a great team,” Hueston said. “With Enron, it was a terrific FBI and legal team. At the firm, it’s the other partners and associates. We are a 40-lawyer firm that gets 400-lawyer results and to accomplish that, we are highly specific in the kind of attorney we hire, retain and promote.”

How to define the Hueston Hennigan lawyer?

“Talented, well-educated young lawyers are plentiful,” he said. “But when I see someone prepared to lay it all down for a trial; someone who truly has the grit to work through the toughest moments of a trial — that’s the kind of person I want to be in the trenches with. And frankly, even among graduates from top law schools, that’s a rare trait.”

Given the emphasis on endurance and grit, it is perhaps no surprise that Hueston Hennigan is home to a small throng of lawyers who are long-distance runners and athletes who indulge in extreme challenges in their off time.

“It’s true,” Hueston laughs, “We could field our own track team.”

Hueston himself has completed more than 10 marathons. He also cycles, kayaks, climbs and has basically never met a fitness challenge he didn’t want to overcome, including cycling and kayaking from the west to the east coast of New Zealand. In September, he will participate in the 100- mile Civil War Century bike ride through notable battlefields. In 2017, he and friends will cycle across America.

“Running definitely makes me a better lawyer,” he said. “It’s the concept of mens sana in corpore sano — a sound mind in a sound body. The practice of law is grinding on the mind, body and soul; running gives you the endurance and tempered approach that keeps you fresh and balanced.”

Quick to laugh, sympathetic and genial in person, Hueston transforms in a courtroom. To a judge, he is master of the facts; to a jury, he is a story teller; to the opposing side, he is a formidable, relentless foe. In the course of 24 years of high-stakes trials, both as a prosecutor and in private practice, Hueston has a record most attorneys achieve only by staying out of court — winning over 97 percent of his cases.

“It’s always my goal to be the most knowledgeable attorney in the courtroom with all the facts,” he said. “And for the judge and the jury to understand, at the earliest possible time, that our team has command of all the facts. Everything flows from that.”

That deep knowledge, he said, sets the foundation for case management. “It allows you to know all the potential minefields in the law, to properly advise the client whether to settle or to proceed and to speak from the heart to a jury.”

According to Melissa Scanlan, senior director of IP litigation and antitrust at TMobile, Hueston is the “full package.” The two have known each other for close to 25 years, having attended Yale Law School together. “He was a great law student,” she said. “After Enron, we got back in touch; we’ve been working together for nine years. He is a first rate litigator — incredibly strategic and savvy in the courtroom. I would — and have — trusted him with our most complex cases.”

According to Hueston, he has been able to master this “on his feet” approach to litigation because of his experience in action. With that in mind, all Hueston Hennigan attorneys, from first-year associates to senior litigators, are given intensive training and real-life trial experience.

The firm guarantees each associate two trials in their first year, staffing them on trials with client’s permission, as well as vetting pro bono opportunities to provide young attorneys with high-yield oral advocacy opportunities. To date, associates have participated in more than 20 trials — prevailing in every case — and in recognition of the firm’s extraordinary record of service, the Los Angeles Center for Law and Justice named Hueston Hennigan its 2016 Pro Bono partner of the year.

“Public service is indispensable in the development of an attorney,” Hueston said. “All the partners at the firm agree that we can and will always incorporate a continuing sense of public service responsibility in our lawyers.”

Whether he is speaking of the cases that shaped him as a lawyer or the founding of a law firm, the way Hueston speaks of the continuing quest for endurance challenges might as well apply to all three scenarios.

“The whole idea is to do something epic — to have a goal that you constantly keep moving yourself toward body, mind and soul.”