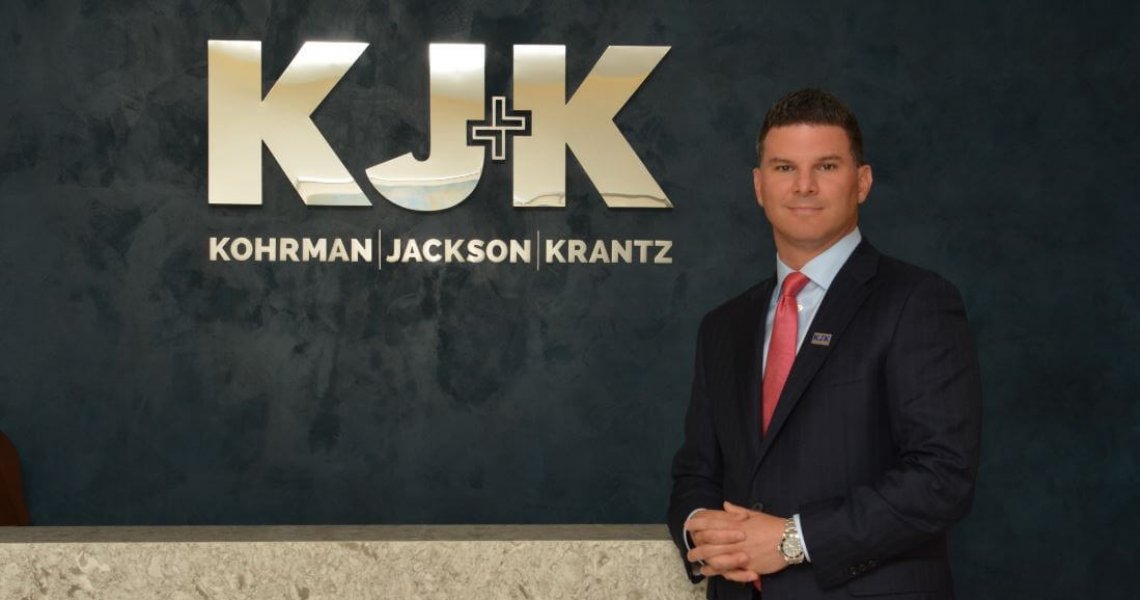 KOHRMAN JACKSON & KRANTZ LLP MANAGING PARTNER JON PINNEY IS KNOWN FOR HIS INNOVATIVE AND TECHNOLOGICAL APPROACH TO THE PRACTICE OF LAW. HE LEADS THE TEAM OF 40 LAWYERS IN SERVING A VARIETY OF CLIENTS INCLUDING HIGH NET WORTH FAMILIES, ENTREPRENEURS, NONPROFIT ORGANIZATIONS AND PRIVATE BUSINESSES. HIS SPECIALIZATION IN WEALTH AND RISK MANAGEMENT ALLOWS PINNEY TO MANAGE ASSETS FOR HIGH NET WORTH FAMILIES.

Jon Pinney envisioned his career path much differently than the one he leads now as a successful managing partner.

“Entering into law school, my intended career path was to go into the FBI,” Pinney says. Unfortunately, the debt from student loans left a much deeper hole than he anticipated, so Pinney decided to switch to the private sector and pursue a career as an attorney.

Although pursuing a career as an attorney wasn’t what Pinney had planned, he was still able to apply his analytical mind and passion for problem solving.

One might wonder if an opportunity to join the FBI was available today, if he would pursue it and Pinney answers with a laugh. “Maybe if I was offered the director position.”

THE PRACTICE OF LAW

Pinney was interested in pursuing a legal career as a prosecutor, but he entered the private sector litigating securities cases. There, he found a passion and ditched his plans for pursuing a career as prosecutor.

“I worked on several large matters as a young attorney, which allowed me to begin building a clientele at a young age,” Pinney says. “I was committed to private practice.”

From there, he began developing his practice and working with high net worth families. Though he’s been in practice for nearly 16 years, he admits that he doesn’t have a defined niche. Since he serves as general counsel and trustee for various families assisting them in managing their business and legal affairs, Pinney is able to emphasize part of his niche in securities law.

Before joining Kohrman Jackson & Krantz, Pinney worked at a small boutique firm. While there he was able to gain a tremendous amount of experience and develop a foundation to a successful practice as a young attorney.

One of the most important cases of his career was a high-profile securities class action lawsuit involving Telxon Corp. Shareholders filed two class action lawsuits against Telxon Corp. alleging artificial and misleading statements falsely inflated the price of Telxon securities resulting in buyers of Telxon securities experiencing damages. Pinney worked as a lead associate on the case for which he ended up taking depositions from all over the country and learned to write at a very high level. During the case, Pinney was litigating against some of the largest firms and top lawyers from around the country. The case lasted several years and resulted in Telxon paying $37 million to the class involved. The case ended up being featured in the Wall Street Journal and the work Pinney provided was cited repeatedly in a high-profile opinion issued in connection with the case.

With a high-profile case that allowed him to gain invaluable experience, Pinney gained insight on the key components to a successful career as an attorney. He carried his litigation, writing and leadership skills over to his practice with Kohrman Jackson & Krantz. Today, as managing partner, he has taken a lesson in the business-end of law and prides himself on being an effective leader.

“I give my team considerable independence and trust their work,” Pinney says. “I also focus on big picture strategy issues and try to avoid stressing over minor issues that rarely impact the ultimate outcome.”

The second challenge is evening out the playing field in the industry. Pinney believes that maintaining the firm’s status as a mid-size practice handling complex corporate transactions and litigation gives the firm a competitive advantage. By remaining smaller the firm is able to maintain a low-cost structure and to pass on that savings to clients through competitive hourly rates. According to Pinney, the firm’s size and value proposition has worked as a great differentiator in the past. He hopes to continue that in the future.

Some of the greatest rewards of representing such a large diversity of clients on various cases throughout Ohio is earning the trust of the clients, oft en resulting in long-lasting friendships with the clients.

Ironically, during his time representing the Telxon securities case, Pinney’s opponent was KJK. Pinney had noticed the sharp intelligence of the lawyers and the size of the firm. However, it was Marc Krantz that sealed the deal for Pinney. Krantz and Pinney had met up for a drink and Pinney left with a job offer.

“I thought very highly of Marc,” Pinney says. “He was an impressive person.”

Pinney describes the firm’s culture as open and friendly. He also notes that the firm tries its best to avoid a hierarchy structure allowing a sense of equality and respect throughout the office. Pinney says the team works diligently and quite well together. Working together is a key component to the success of their cases, for which Pinney acknowledges the great effort of each team player in helping each other. “I mean that,” Pinney says. “We’re a pretty solid team.”

In 2014, following the unexpected loss of Krantz, Pinney was asked to step into the role of managing partner. “Marc was our leader for the past decade,” Pinney says. “It was an extremely difficult time for all of us. We certainly weren’t prepared for it, but I was able to step up and help the firm move forward.”

As his role in the firm quickly changed, Pinney says that with a lack of time to form any misconceptions about the managing partner role, he simply implemented what he learned from Krantz – fairness and integrity. While some unexpected changes can be difficult to adapt to, Pinney says the change of roles isn’t so challenging.

“I just work more hours and I don’t mind doing so,” Pinney explains. “I maintain the same workload as before and I handle management issues early in the morning or on the weekends.”

Over the past two years, Pinney has been gearing up to face the changes in the corporate world, particularly in terms of technology. Recognizing the fast pace of change within the legal industry, Pinney is forging the firm ahead with a new management system and continuing to invest in technology and marketing. Some of those investments include bringing on non-legal staff members to help guide the firm in a thriving direction.

“We have also updated all of our server and network systems to benefit the clients and legal staff of the firm,” Pinney says.

Outside of his role as managing partner of Kohrman Jackson & Krantz, Pinney is actively involved in his civic leadership throughout the community, both local and national. He is very politically involved in national political conventions, including the 10 years he worked in attempting to secure a national political convention in 2008 and 2012. In 2014, he wrote a 345-page bid to host the 2016 Republican National Convention, which he won. He also serves as the general counsel, secretary and treasurer for the Host Committee.

As part of his involvement within the local communities, he serves on various boards including Th e Rock and Roll Hall of Fame and Museum and Junior Achievement of Cleveland. However, the organization he holds closest to his heart is Destination Cleveland for which he was appointed by Mayor Frank G. Jackson. Pinney serves on the board of directors and the executive committee of Destination Cleveland, as well as treasurer and general counsel.

Destination Cleveland is a convention information bureau that serves to promote the Cleveland region as a destination for leisure and business travel. At Destination Cleveland, Pinney works closely with the CEO David Gilbert, of whom Pinney also regards as a close friend. Pinney has been on the board for over 10 years and truly enjoys his time working with Gilbert.

Being a leader within various organizations throughout the area has offered some invaluable insight for Pinney over the years. It has been a way for Pinney to gain exposure to a diverse population of people, as well as networking with different attorneys and business leaders. In doing so, Pinney has been able to observe different styles of leadership and management systems from others allowing him to develop and implement his own that best suit the firm’s approach to practice.

For Pinney, he believes that it is an attorney’s civic duty to participate and give back to the local communities, whether that is through participation as members of respective organizations, donating and volunteering with local charities, or simply providing some source of aid to other organizations. He implements these beliefs by practicing his civic, political, social and ethical duties as an attorney and ensures that same vision through the firm, also noting that playing their civic role within the community is instilled within the history of the firm’s culture.

“I hope that people see we are a sophisticated, mid-sized firm that successfully serves the middle market,” Pinney says.

Though there will not be any vast expansions in size or location of the firm, Pinney does acknowledge an interest in adding about five to eight more attorneys to their staff, bringing the level of expertise to roughly 50 lawyers on staff to continue efficiently and effectively servicing their clients.The firm plans to continue its steady pace as a mid-sized firm and from Pinney’s perspective, has no intentions of expanding much more.

From a personal standpoint, Pinney truly enjoys his role as a leader within the firm and working alongside a great team of legal professionals. Since stepping up to the managing partner role about two years ago, it comes as no surprise that Pinney is eager to continue pushing the firm forward in its development and successes. He hopes to continue that legacy for many years to come.

“I don’t see myself stepping back anytime in the foreseeable future,” Pinney says.

With the hope that the future generation of Kohrman Jackson & Krantz lawyers will remain as active and share the same level of passion Pinney has to providing excellent services to their clients, he holds himself accountable for creating that blueprint for future generations to utilize.

“I wake up every day searching for ways to improve myself as an adviser and discovering better ways to serve our clients,” Pinney says.

Bob Goodman, founding partner of Goodman, Weiss & Miller, gave Pinney some timeless advice that has stuck with him throughout his legal career.

“He told me to make myself indispensable, so that if I ever leave, the firm cannot function properly without me,” Pinney says.

Goodman offered Pinney invaluable insights on how to successfully run a firm from the business side of things, also teaching him how to be fearless.

“It is a very challenging profession where ultimately my clients’ problems become my own problems, so managing the stress can be difficult at times,” Pinney says.

However, being in a powerful position to help people through very difficult and often complicated situations, Pinney says is the best part about being an attorney. Pinney’s passion for helping his clients persevere and thrive through their difficult and complicated situations shines clearly through his successful leadership and dedication to the firm, his team and the clients.