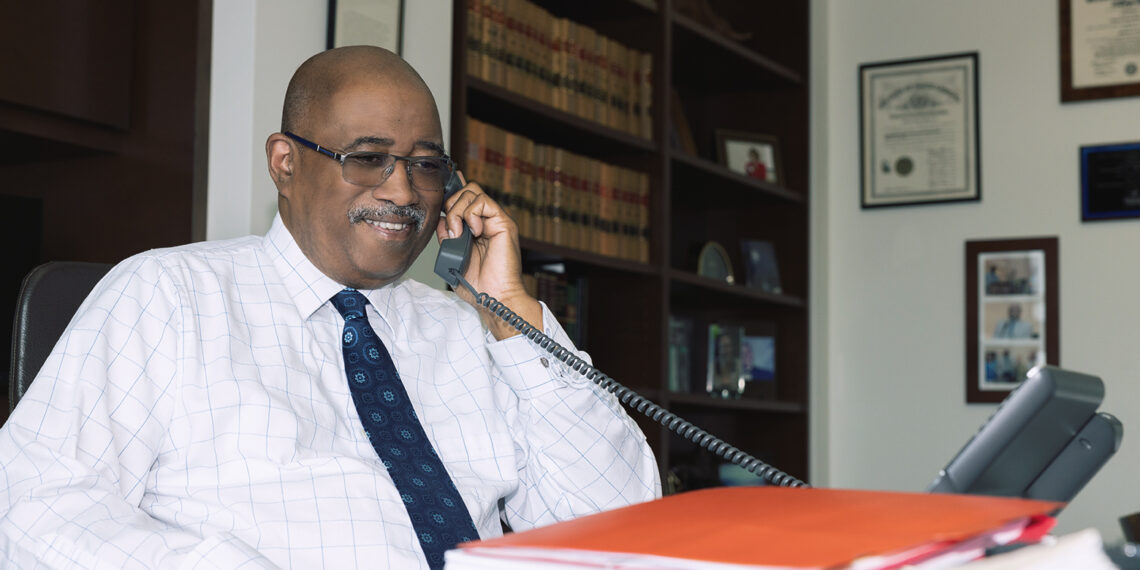 Judge Orlando F. Hudson Jr.: The Gatekeeper and the Owl

Walking out of his courtroom recently, Durham County Senior Resident Superior Court Judge Orlando F. Hudson Jr. shrugged his shoulders and chuckled when asked about being in the limelight when HBO releases “The Staircase” next year. It’s the dramatization of the eponymous 2018 Netflix hit documentary mini-series.

Hudson was the judge in the high-profile 2003 Peterson “staircase” trial. Unless you are a North Carolinian who’s been living in a hyperbaric chamber for the last 20 years, you’ll recall that Durham novelist Michael Peterson was found guilty of murdering his wife, Kathleen, by shoving her down the staircase in their Durham home in 2001.

“I like being in the spotlight. I understand it has to do with preparation. I get excited by complicated high-profile cases because it means I have to think, and I have to perform. But I feel like I’ve got the background to do it,” said Hudson.

In addition to the Peterson trial, Hudson has been the judge in a number of high-profile murder cases. And this past May, he was in the spotlight when he ruled that e-cigarette company Juul Labs had destroyed documents. His decision may clear the way for multimillion-dollar lawsuits against Juul to proceed.

Hudson, who was one of the early guests when Court TV went on the air in the 1990s has been a longtime advocate of televised trials. “They let the public see what really happens in court … not the “Law and Order” Hollywood version,” said Hudson.

In a similar vein, Hudson said it was a positive step forward for the Black Lives Matter movement when the murder trial for Minneapolis cop Derek Chauvin was televised. He was convicted of the murder of George Floyd.

“Well, I just think it’s a big deal to have that trial televised throughout the United States and the world,” said Hudson.” Viewers saw the jury selection process how they did that, the way that issue was dealt with in the jury, and by the commentators who handled it. Just from the standpoint of the police officer getting the fair trial, issues were talked about in that case such as both implicit and explicit bias in jury selections that had never been talked about in big trials.”

The Floyd case and the ensuing Black Lives Matter protests worldwide sparked discussions about implicit and explicit bias in law enforcement and court systems. For example, in North Carolina, Governor Roy Cooper created the North Carolina Task Force for Racial Equity in Criminal Justice to look at the state’s justice system. Among its December 2020 findings, “We also recommend taking steps to mitigate implicit bias by jurors exercising their duty.”

“When you can talk about those things and when you ask potential jurors about their biases, it’s OK to have biases. It’s OK to say that you’re prejudiced, but you got to set it aside, and if you can’t set it aside, then you can’t sit on the jury,” Hudson said.

Hudson was raised in High Point, NC in a family of teachers. His father was a high school principal who became an EEOC specialist. He visited local schools to see if they were adhering to the Brown v. Board of Education ruling. “Which we know they weren’t,” said Hudson.

Hudson followed Chess to a career on the bench after spending time in private practice and working as a public defender and as an assistant DA.

Part and parcel of his role as a judge, said Hudson, is ensuring a fair trial by separating fact from fiction for jurors when he believes there is misleading evidence or testimony.

Hudson said he would step in if he thinks “junk science” is being presented.

“A lot of judges would say it’s up to the jury, and they believe what they believe. Some people say the judge is not supposed to do that, but you have the power to do that. But if it’s an unfair presentation and I know it, I’m going to stop it. I think that’s part of the gatekeeper role that a judge always has,” said Hudson.

“In a civil case or criminal case, the judge can’t stop thinking because even if you give it to the jury, they make their own decision. The jury makes the right decision most of the time, but sometimes they don’t get it right and it’s the judge’s responsibility to stop it. There’s a method to stop it in a criminal case or a civil case.”

Hudson predicted that science and technology would create new forensic tests of physical evidence in the future, some of which may turn out to be unreliable, to denying access to justice for some defendants who can’t afford to have independent tests done on the evidence.

“One thing you got to have in criminal law to win a case is money. You have to have your own investigators to fight the state because the state has unlimited resources. Most defendants don’t in a criminal case.”

Colin Furth will play Michael Peterson in the HBO series, and Michael Stuhlbarg will play David Rudolph. Hudson said with a laugh he’d like to see Denzel Washington play him.

There continues to be an offbeat theory that Kathleen Peterson was knocked down the staircase by an owl. The HBO series may explore it, but as for Hudson, “I don’t think much of it (laughs). I don’t know that any jurors would have believed that.”