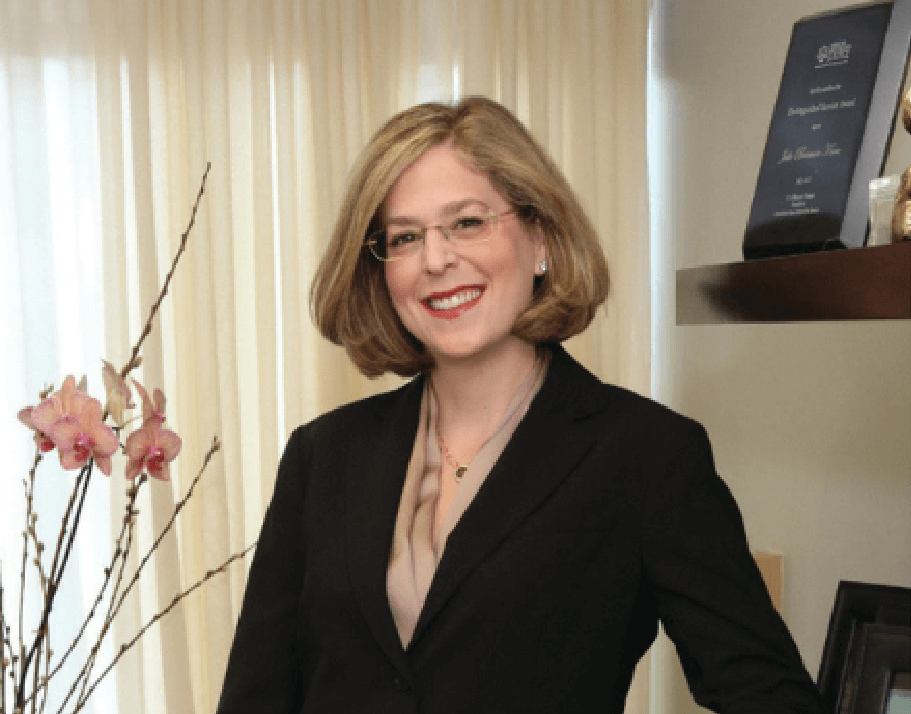 Julie Braman Kane exemplifies the ideals of ethical practices, professionalism, compassion for her clients and protection of her clients’ rights. Throughout her 21-year career, Kane has earned a myriad of accolades from professional organizations, represented clients in cases that have resulted in multi-million dollar verdicts and settlements, chaired numerous professional committees and donated time to serve her surrounding community. Today, as a partner at Colson Hicks Eidson, she is recognized as a steadfast litigator and champion and mentor for female attorneys nationwide.

The hand of fate took hold when, as a first year law student in 1991, Kane landed a job as a law clerk at Colson Hicks Eidson, one of South Florida’s oldest and most recognized litigation firms. Although she understood the position was specifically a summer-only internship, Kane proved herself a valuable asset and was hired as an associate when she graduated in 1993. She was promoted to partner in 1999 while pregnant with her first child.

“I have had the privilege of working at the same firm for my entire career and learning from some of the best legal minds in the country,” said Kane. “My partners have always pushed and inspired me to reach higher. From the beginning, I was given an opportunity to become more involved in cases than most young lawyers have the chance to. They taught me to work closely with my clients and to always strive to provide the highest quality representation possible. They also encouraged me to get involved in community and professional organizations, and have helped ignite a passion in me about legal work that echoes their own.”

At this point in her career, Kane chooses to accept only a small number of significant cases, averaging 12-15 at a time, and focuses on developing a solid rapport with her clients and devoting personal attention to their legal needs. In addition to her ongoing client roster, Kane coordinates the firm’s pro bono work and frequently acts as guardian ad litem for children in contested custody cases.

Lauded for her professional accomplishments both inside and out of the courtroom, Kane has received several notable awards. In 2010, she was recognized as a “Most Effective Lawyer” by the Daily Business Review for her work as part of the receivership team on the Mutual Benefits case, formerly the nation’s leading viatical settlement company. As the largest Securities Exchange Commission enforcement action ever in South Florida, the SEC shut down Mutual Benefits in 2004 for selling unlicensed securities and appointed Colson Hicks Eidson partner Roberto Martinez as receiver. As part of the receivership team, Kane was instrumental in recovering in excess of $120 million for more than 30,000 defrauded investors worldwide.

A testament to Kane’s dedication to her clients and stellar work ethic, she worked closely with Martinez in the early stages of the receivership case while home on doctor-prescribed, maternity bed rest. During a period of time when Kane otherwise would have been unable to contribute to her clients’ cases, she made it a point to stay involved and completed a tremendous amount of work from home. Her contributions were instrumental in gaining critical information for her co-counsel.

Over the course of her career, Kane has secured multi-million dollar verdicts and settlements for clients, including a $38.3 million verdict in a medical malpractice and pharmaceutical negligence case in which her client suffered a debilitating condition while undergoing spinal surgery. The jury recognized the tremendous harm that negligence in a medical setting can cause, resulting in not only a significant jury award, but hopefully also effecting future changes in the way and level of care with which medical care is provided in operating rooms. The significant outcome in this case resulted from years of advocacy by Kane and her co-counsel, Colson Hicks Eidson Partner Joe Kalbac.

In addition to being an exemplary litigator, Kane is passionate about serving the legal profession, motivating female trial attorneys and serving the community.

Following in the footsteps of several Colson Hicks Eidson partners before her – including the firm’s Co-founder Bill Colson and Partner Lewis S. “Mike” Eidson – Kane has been an active member of the American Association for Justice (AAJ), the world’s largest trial bar, for more than 15 years. Recently elected Parliamentarian of the AAJ, she has served on the Board of Governors, the Justice PAC Board of Trustees, and the National College of Advocates Board of Trustees. She also previously served on the AAJ’s Executive Committee and Budget Committee, and chaired both its Products Liability Section and Women’s Caucus. “In a nutshell, the purpose of AAJ is to protect the right to trial by jury,” said Kane. “Through my involvement in this organization, I believe we are truly making a difference in maintaining all Americans’ rights to access the court system when harmed by someone’s negligence.”

Consistently recognized for her leadership in the legal profession and her dedication to community members, consumers and the trial bar, Kane has been a recipient of the Association’s Marie Lambert Award, Joe Tonahill Award, Distinguished Service Award, and Weideman Wysocki Award.

In addition to her vast involvement with the AAJ, Kane also serves on the Board of Directors for the Florida Justice Association and has chaired the Women’s Caucus and the New Lawyers Division. A past president of the Miami-Dade Chapter of the Florida Association of Women Lawyers, Kane also recently served as a Commissioner for the Florida Elections Commission for which she was appointed by then – Governor Charlie Crist in 2008.

In 2010, the University of Miami School of Law honored Kane with the Alumni Leadership Award, which is given annually to attorneys who have distinguished themselves in their careers and serve as role models for the next generation.

As the saying goes, “it takes a village to raise a child.” Kane believes the same idea can be applied to attorneys, suggesting experienced lawyers can play an important role as new lawyers develop their skills. The success and failures of a young attorney are directly correlated with the support system they have from day one.

Crediting her success to a long list of mentors, Kane has been paying it forward for years. She truly enjoys inciting a love of practicing and of the law itself to future generations.

“Today, there is an equal number, if not more, of women graduating from law school every year,” said Kane. “As such, attorneys are being judged more on their merit in the workplace rather than the formerly accepted practice of assuming that men would make better attorneys simply because of their gender.”

“I would encourage young attorneys to go out and network in order to meet people who can help you in the future,” explained Kane. “You never know when you will need to reach out to a peer or potential mentor.”

According to Kane, while there is no “magic” place to look for advice and guidance, there are many organizations designed for just this purpose. Kane recommends the Florida Association for Women Lawyers, the Cuban American Bar Association (CABA), the Dade County Bar and AAJ for reference and networking opportunities, although there are many other fine organizations available.

“Although it is wonderful to identify a single mentor to help define your career and goals, today’s new graduates need to understand that they are one of 1,000 trying to do the same thing,” mentioned Kane. “You will find that most attorneys who have been practicing as long as I have are more than willing to help.”

With an active legal practice, a husband, three kids – ages 7, 7 and 12 – and two dogs, Kane somehow manages to keep a healthy work/life balance.

“I love to practice law and the only way I can remain successful for my clients and for my family is by having the support of my husband as well as the backing of a law firm that understands the importance of balance,” said Kane.

“There has not been one singularly defining moment in my life that has brought me to where I am today, but rather a series of auspicious moments,” explained Kane. “I am grateful for the combination of incredibly good fortune in finding a perfect fit the first time out in the job market from my law firm, an insatiable thirst for knowledge about my field of expertise, incredible mentors and peers, rewarding appointments in professional organizations that support my ideals and a strong partner at home who has supported me every step of the way.”