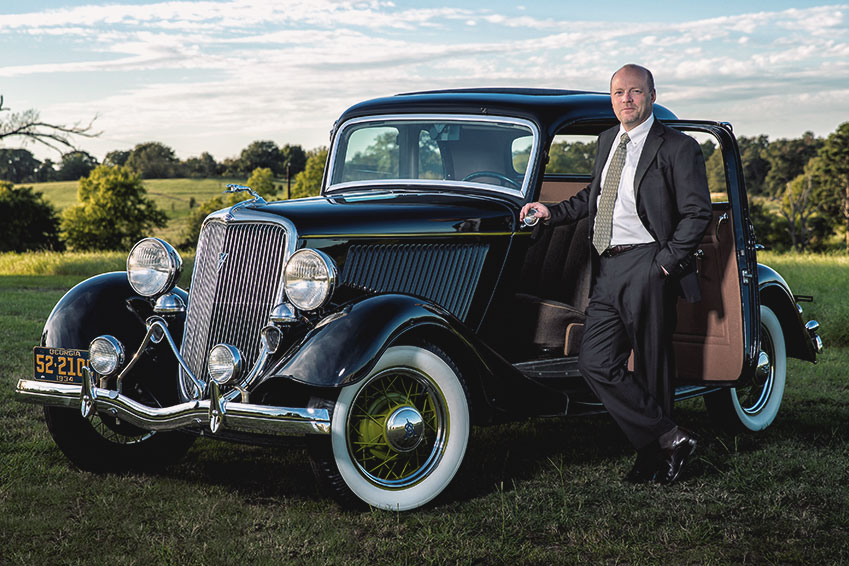 For an attorney who “just fell into” his practice area and whose fantasy dream job is owning and managing a beer brewery in east Texas, Keith Clouse has managed to build a strong firm and a remarkable and growing reputation in handling high-profile and complex employment law cases.

Becoming an attorney did not occur to him until he attended college. He was an Accounting major at the University of North Dakota where he became friends with his business law professor who suggested that he consider going to law school.

“I really just fell into it. Growing up, I didn’t have any aspirations to become a lawyer. I only applied to one law school. If I got in, great. If not, I was going to be a CPA. Fortunately, I got into Tulane Law School in New Orleans and the whole experience was fantastic. As a young associate, I also got lucky to have a mentor who told me he was going to make me a “labor and employment lawyer.” he says.

A FOCUS ON SENIOR EXECUTIVES

Clouse enjoys working with senior-level executives and business owners in a wide variety of industries. “We have clients across the board, across the country. I enjoy working with senior executives. You work with one person who can make decisions quickly. There are no committees. Senior execs tend to be far more decisive. They can make decisions at the drop of a hat,” he says.

His approach with clients is to be very direct and candid about what they need to do, traits that have developed over time working within a well-defined and challenging legal niche. Clouse says that some attorneys automatically “start throwing gorilla dust” at each other, but his approach is often far less confrontational and more successful in the long run. “I just pick up the phone, call opposing counsel and try to have a conversation. I can generally see a path to resolution and then I try to work with opposing counsel to get the case resolved in a way where nobody is made to look bad. This approach can quickly and efficiently resolve disputes which might otherwise take 2-3 years to litigate or arbitrate.”

Clouse only takes cases he believes in. “You have to routinely assess whether people are credible and determine whether certain facts make sense. When something doesn’t make sense and the other side can’t give you any reasonable explanation as to why certain events took place, that suggests the facts are just as my client says they are and that our firm is a good fit for that client. We work only with the people and companies we want to represent.”

His personal edge in working with clients and handling cases in the courtroom or across the negotiating table is his “gut instinct.” “I can size up an employment case or situation very quickly and give you clear insight into what we need to do – how to get from point A to point B.” he says.

Clouse keeps his firm up-to-date and in tune with current trends and changes that will have a significant effect on the law and his present and future clients. For example, he notes that the “Me Too” movement is clearly having an impact on the work environment and workplace law. He does not foresee that movement retreating any time soon.

He also foresees continued expansion of employee rights and employment laws that will broaden protections for employees. There will be more rules and regulations for businesses to follow. One of those changes may be the shifting dynamics of non-compete law in which it may become easier for employees to leave a workplace to find employment for a competing firm. He cites changes in Massachusetts and New York laws in which recently- passed laws state that if an employer releases an employee without cause that employer can’t saddle the employee with a non-compete clause.

A continuing expansion of arbitration will also be one of those trends he says. “Because the courts are so backlogged, it can often take two or three years to bring a case to trial which is very slow and as a result a lot of companies, big and small, have opted to put arbitration clauses or arbitration agreements in place. The American Arbitration Association generally wants to get a case to hearing in less than 12 months, which gets the dispute over, reduces attorneys’ fees and allows the parties to move forward. Those and other factors have caused a steady increase in arbitration because it certainly is “quicker.”

One of the challenges the industry faces is rate pressure. “And rightly so. Attorneys are going to have to come up with ways to control or at least keep attorneys’ fees in check. There’s another problem before the legal industry as a whole. A lot of times people have a case, but the ‘entry fee’ may be hundreds of thousands of dollars which is often cost prohibitive. Somebody comes in and says, ‘A company owes me $80,000 in commissions, will you take my case?’ Unfortunately, the answer is no because the client will likely have to pay more than $80,000 in attorneys’ fees to try and get the $80,000 he is owed. It’s very difficult for lower and middle-income people to hire attorneys because they simply can’t afford to pay the attorneys to fight for them. The cost threshold is just too high. That’s a problem,” he says.

Clouse and his wife of 29 years, Jami, have three children: two boys, Jackson and Jed, and a daughter, Jesse, who is an associate at Clouse Brown. The family enjoys spending time in the outdoors at their east Texas lake house and farm.

His hobbies and interests are centered on the classics – classic 60s and 70s rock‘n roll and classic cars. In high school Clouse drove a ’69 Camaro muscle car and the love of old cars never left. He now owns a 1934 five-window Ford coupe, a 1959 GMC truck, and a 1960 Corvette – all restored with original equipment.

Clouse readily admits to the occasional dream of a life in a far different industry. “In my true heart of hearts, I’d be a beer brewer. I’ve always wanted to do that. If I hit the lottery tomorrow, I’d retire, move to east Texas and brew beer.”

Until he hits the lottery, his business life is centered on the law, his clients and management duties at Clouse Brown. “I’ve been very lucky because I really like what I do. I fell into it and met a lot of great people along the way who guided me into the niche we’re currently in. It’s been a good niche,” he says.