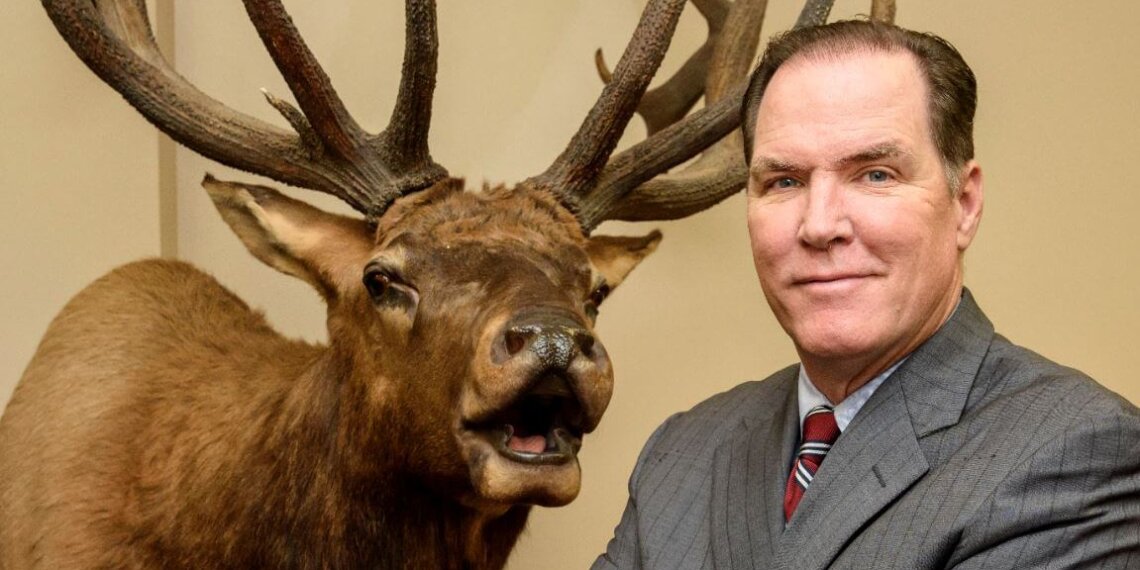 It’s those piercing eyes. Cool. Blue. Steely. It’s the intense way he looks through you. It’s his aggressive deportment and ability to dissect the complex almost instantly. His self-description – tough, smart, proven. This is the public image of Raleigh business attorney, Kieran Shanahan.

Yet in private, at his North Raleigh home with his wife, Tina, and their dogs, Kaiser and Winston, Shanahan is a different man. Quiet. Relaxed. Playful.

“What drives the seemingly hard edge in public is care and compassion, and sometimes it comes across as caustic,” said Shanahan. “I’m the guy in a room that says what everyone else is thinking and sometimes people don’t like to hear the truth. My response is that it’s not the messenger, it’s the message that makes people uncomfortable.”

The Art of the Argument

The sixth of nine children, Shanahan was raised in McLean, Virginia, outside of Washington, D.C. His father, Arthur, worked for the CIA, though Shanahan admits, “for years, I thought he worked for the U.S. Department of Agriculture.” His mother, Mary-Alyce, was a school teacher for over 30 years.

Shanahan developed his skills as a litigator around the dinner table with his large, Irish family.

“When you are one of nine children, you learn to argue for just about everything. I was a middle child and often played the role of peacemaker. This upbringing was a great experience for a legal career. I love a good fight, but I also know that at the end of the day, making peace is important,” said Shanahan.

He earned his Juris Doctor at UNC School of Law, where he was an editor of the North Carolina Journal of International Law and served on the prestigious Holderness Moot Court Bench.

After a short stint practicing labor law at a large, Atlanta firm, Shanahan pursued his passion at the U.S. Attorney’s office in Atlanta and Raleigh, where he investigated white-collar crimes for five years. “I really liked the investigative and grand jury aspect of federal criminal investigations. In these kinds of cases, you have to figure out what the crime is, so you have to work backward. Once you decide this is a guy who needs to be prosecuted, then you have to gather the evidence to prove guilt beyond a reasonable doubt. That was something I was really fascinated by and enjoyed. Human behavior can be complex but often it is quite predictable, too.”

“Being a successful prosecutor requires one skill, but when I became a white collar defense attorney I had to hone a different skill set,” he continued. “You have a client who has a life, family, often owns a business, and is a leader in his community but now has been charged with a crime. It’s a completely different dynamic than prosecuting. You do as much counseling as you do legal work. Advising on law is just one component of helping clients achieve their overall goals and objectives.”

“As for my civil business practice, if you have good lawyers on both sides, a case should never go to trial. A business client wants resolution and clarity in a timely fashion; letting jurors decide their fate is not where they want to be.”

Shanahan launched his own boutique firm in 2001 for entrepreneurs and smallbusiness owners.

“I am an unabashed, free market libertarian,” said Shanahan. “That being said, I recognize we live in a heavily regulated environment. I understand the value of offering strategic advice and helping clients navigate through the maze of laws and regulations.”

Shanahan, a conservation hunter, has trophies from his many hunting trips displayed throughout his office. “During these hunting trips, nothing goes to waste,” he said. “We provide meat from what we have hunted to the local villagers.”

He has successfully hunted five of the “big seven” African species, is working on his turkey grand slam, and also enjoys duck and quail hunting. “I draw spiritual nourishment from being in and among nature and these animals,” said Shanahan. “I also enjoy tremendously the Africans who love the land and the animals. It’s really a unique and wonderful experience.”

Shanahan Farms in North Raleigh is home to the lawyer and his wife. “It’s an oasis and a getaway. Tina and I like hanging out at the barn and being outside on our property,” said Shanahan. “I especially like being on my John Deere.”

The couple was serene and at peace in a world of their own making as they strolled along the dirt path leading to the farm’s paddock. An international equestrian champion, Tina has the barn’s tack room lined with her countless trophies, ribbons and awards. She was No. 1 in the nation on the 2008 American Paint Horse Association’s (APHA) Top Twenty List for all-around events. She won the title of World Champion in 2011, 2012 and 2013 at the APHA World Championship Show in the Hunter Under Saddle event.

Tina is also a two-star rear admiral in the U.S. Navy Reserves, currently serving as deputy commander of Navy Medicine East and deputy director of the Nurse Corps.

“So many times in my professional and civic life, I am in a leadership role,” said Shanahan. “With Tina, I’m in a supporting role and that’s something I had to learn, but now I absolutely embrace it.

“I am so proud of her and so smitten with her,” he continued. “We support each other in the things that we do. Neither of us would be as successful as we have been without each other. But neither of us is defined by our public personas. We really are intensely private people. More than anything else, we enjoy our infrequent downtime together.”

On the other side of the farm’s fence lies the outside world which commands Shanahan back to the spotlight.

Shanahan has maintained a strong tradition of active community involvement throughout the Triangle. He is currently the chairman of 2016 Triangle Heart Ball. The February event hopes to raise over $2 million for the American Heart Association. “One out of every four deaths in this country is related to heart disease. I am honored to dedicate my time and talent to a cause I believe in. Including cajoling and shaming my friends into contributing,” he laughed.

Sitting in his comfortable home office, with Winston at his feet, Shanahan popped another Jelly Belly into his mouth, calling to mind his role model, Ronald Reagan. The other is Winston Churchill.

“Churchill had a steady hand in a crisis. He was truly an authentic leader, he was tough as nails and a little rough around the edges.”

“A bit like Kieran,” said Tina with a smile.