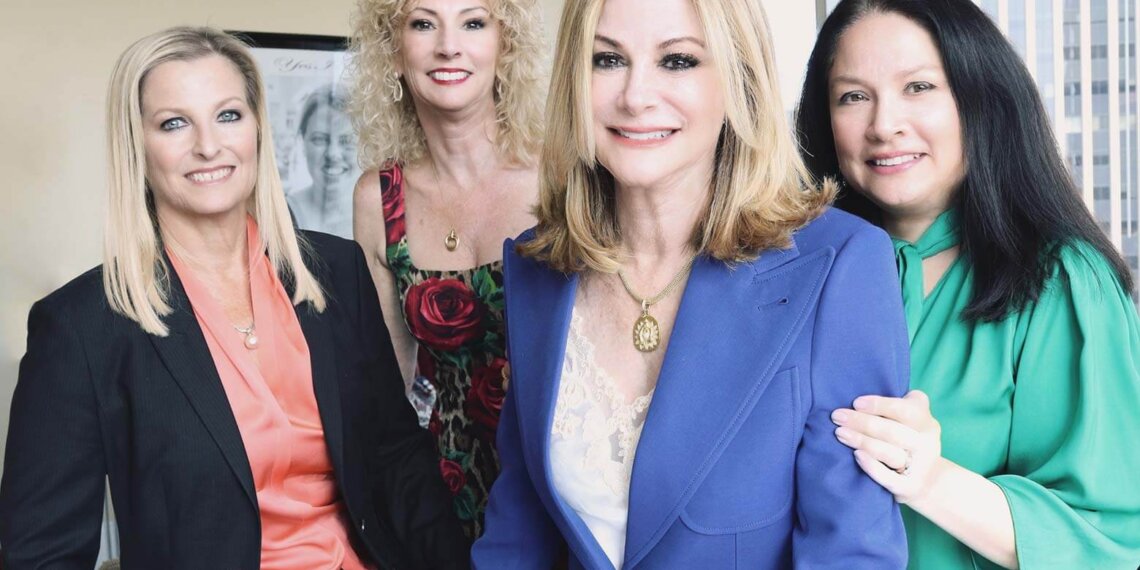 Linking her innate nurturing side with her frustrations over starting her career in a sexist 1970s environment, Meyer—the senior partner of female-founded, family law firm Meyer, Olson, Lowy & Meyers—has followed her passion to advocate for parents (especially the underdog) and their children in all aspects of family law.

“Divorces, pre-nups, custody, depositions and trials,” rattles off Meyer of her typical workload. “I enjoy the challenge of a good fight.”

And sometimes those challenges don’t always garner her friendships with opposing counsel. Like the fights that earned Meyer the nickname “Lisa Hellbent Meyer” and those that got her and her partners dubbed “Pit Poodles.” Even before she was an attorney, Meyer advocated— for herself.

Meyer says, “it is because I never had an older brother, I always had to stand up for myself.”

During a college summer internship in a local TV newsroom, decades before the #MeToo movement, Meyer got her first tastes of chauvinism and workplace mansplaining.

“I think it was not only their behavior that was disturbing, but also their attitude toward the women who worked there,” says Meyer, recalling the men as “disrespectful.”

Her parents had discouraged her lifelong dream of becoming an actress, but saw, in her reactions to that summer’s experiences, a potential compromise—law school. For Meyer, it sounded like the perfect combination of performing on a public stage and commanding justice and respect. For her dad, it was his chance to see his daughter become a lawyer and fulfill both of their dreams. Meyer’s father passed in October 2018, but was proud of her accomplishments until the end.

“You don’t want to be touched or ignored in the workplace,” she says. “You want to be treated as educated and equal to your male counterparts.”

But law school and the early career that followed felt too similar to that TV newsroom.

“If you’re a young woman, even as a professional, you’re not treated the same as your male counterparts,” Meyer says, explaining that in her first job, practicing personal injury law, her 40-something male boss gave her the littlest desk (in his office) and a salary to match.

“I asked for a raise, and you would have thought I was asking to argue a $50 million jury trial,” she says. “In her early days as a family law attorney, some of the male attorneys at the firm were horrible. I would respond, ‘How would you feel if someone said that to your daughter?’”

Another realization, “This is not why I went to law school,” prompted Meyer to leave that firm to go into practice with her then-husband. There, she shifted her focus to domestic violence work, including intrapartner domestic violence, which was new at the time. She partnered with a woman at a shelter who helped victims (usually women) obtain restraining orders.

“That was where I found my calling. Helping somebody with little self-esteem, who had been abused for years, get on their feet and become a stronger person,” explains Meyer of the satisfaction of her newly discovered passion.

“That was where I found my calling. Helping somebody with little self-esteem, who had been abused for years, get on their feet and become a stronger person.”

And that family law attorney who made the sexual comments? He reappeared in her life when she interviewed for membership at a country club and he was one of the board members charged with reviewing her application.

“I made a tongue-in-cheek joke that when we’re against each other I always beat him,” she laughs, adding that, yes, she did get into the club although he refused to speak to her again.

With understanding for the age he grew up in but also conscious of her own experience, Meyer resolved to create a safe work environment for other professionals. Meyer, Olson, Lowy & Meyers LLP was born. She says the firm has exceeded all expectations.

“I created my own firm in 2000, and the goal was to have a primarily all-female firm,” she says. “You could be yourself. It didn’t matter what you looked like or where you came from, you were treated with respect.”

Dana Lowy, who has worked with Meyer for nearly 25 years, loves her loyalty and passion.

“After 25 years, I continue to be amazed at how lucky I am to have Lisa in my life as my friend and business partner,” Lowy says.

True to her mission to help women feel secure in the workplace, Meyer and the firm have mentored young female students, including her niece (dubbed by a client as “The Devil Wears Prada”), every summer as interns since its inception.

“We take them to court and expose them to clients and the system,” Meyer says. “It’s nice to introduce these women to what the real world is like.”

She calls on her own experience at the TV station and the PI firm to deal with the men she’s up against.

“I’ve been at this for over 35 years,” she says, adding that she teaches the women about “letting men know you’re not going to take abuse from them, and they don’t always like that but my goal is not to make friends but to win for my clients.”

But the firm isn’t exclusively female anymore. Seven of its 20-plus attorneys under the four partners are male, including Meyer’s son, Eric.

“One of the biggest joys in my career is watching my son develop,” Meyer says. “He’s an excellent trial attorney. He’s more natural at it than I am. Clients love him, judges love him. He’s so polished, it’s really remarkable.”

Nor does the firm represent only women. Both sexes, she says, can be equally devastated about the loss of a relationship and the loss of their dreams. They can also be victims of domestic violence, where they have lost their sense of self.

“However, like everything else, sometimes the pendulum has swung in the other direction,” she says. “Sometimes it’s too easy for the court to make a finding of domestic violence.”

Meyer, who wrote a regular column on marriage and divorce for Huffington Post and has spoken on the subject on several television networks, says she is gratified to help people and see how they can change, even during adversity. People come for their initial consultations often at their lowest points in life.

“Six months later,” she says, “they are like a different person.”

Fellow founding partner Doreen Marie Olson says Meyer adds a dynamic to her practice not just because of her smarts but also because she’s also very forward-thinking—and very fashionable.

“She dresses to a T with an if-looks-could-kill mentality,” Olson says, describing Meyer’s love for the designer and her ability to pull off leopard prints, stripes and colorful shoes in one outfit. “It’s fantastic. Nothing boring, nothing sedate, nothing simplistic about her fashion. She’s just dynamite.

“And somehow she makes it through the day in those heels! It’s amazing,” Olson adds. “And her days start at 4 a.m. and end about 7 p.m.”

Olson explains how when clients, particularly women, come to see them, their self-esteem is shattered, and their finances are in uncertainty and upheaval. One particular client dreaded seeing her husband in an upcoming meeting. Meyer took her to Gucci and suited her up and she looked like a million bucks. Her confidence level soared, and she was able to get through the meeting feeling great about herself.

“The client held her head up high and she had no problem sitting in that room with her husband and his lawyer,” Olson says. “Lisa was able to see what this client needed besides legal advice. The law had nothing to do with it. It was just understanding the person and her feelings.”

That’s just the kind of sensitivity Olson says is the cornerstone of the firm, which also aims to be a comfortable, yet sophisticated physical environment for clients.

“We bring that female touch to the area of family law,” says Olson. “We deal with the emotion more empathetically than men.”

“Lisa is not the best female lawyer in town. She is the best lawyer,” adds Felicia Meyers, who has been with the firm for nearly 15 years. “Lisa is one of those rare professionals who has it all.”

Meyer’s understanding for women’s needs doesn’t stop at her work at the firm. Olson says she is very generous with her time and money to family-law related charities, including those for children with special needs. (Meyer herself is the parent of a daughter on the spectrum, which has sharpened her talent for understanding ins and outs of parenting for special-needs children.)

Among her causes are the Glenwood Housing Foundation; The Shea Center, a therapeutic-riding center for people with disabilities; Motivating Our Students Through Experience (MOSTe, which mentors girls from underprivileged neighborhoods), Tower Cancer (which is involved among other services with helping men and women treat and hopefully recover from breast cancer); The Harriett Buhai Center for Family Law, which assists low-income clients who are victims of domestic violence obtain restraining orders; and The Levitt & Quinn Center, a nonprofit family law firm protecting children of families in crisis.

In what spare time she has left, Meyer loves to get lost in classic romantic comedies, in book form or on film, which she says never get old.

“In college I loved the sappy romance novels,” she says. “And I love to watch the same romantic comedies over and over again and they still make me cry because they’re so idealistic. And I never cry.”

That she doesn’t cry shouldn’t surprise anyone who works with her.

“Have self-esteem. Have self-respect,” she imparts to her intern and associates. “Don’t let anyone get to you. Be strong. Be assertive. Don’t back down.”

But aren’t things better in the workforce for women now?

“It’s a microcosm of society in general,” Meyer says. “Is it perfect? It’s much more covert and subtle these days. You’re not going to have a male boss coming up to you and putting his arm around you. It’s more subtle, but it still is there, and I think as women we have to keep working so it gets better, not worse.

“I think the prognosis is good, but I think it’s up to the women, too, to hold themselves to a high standard of professionalism in the community,” Meyer says. “When you don’t, it really takes away what you’re trying to accomplish, and what your trying to accomplish is to be a great lawyer.

“Not just a great female lawyer—a great lawyer. Because we’re a minority, we have to be that much better.”