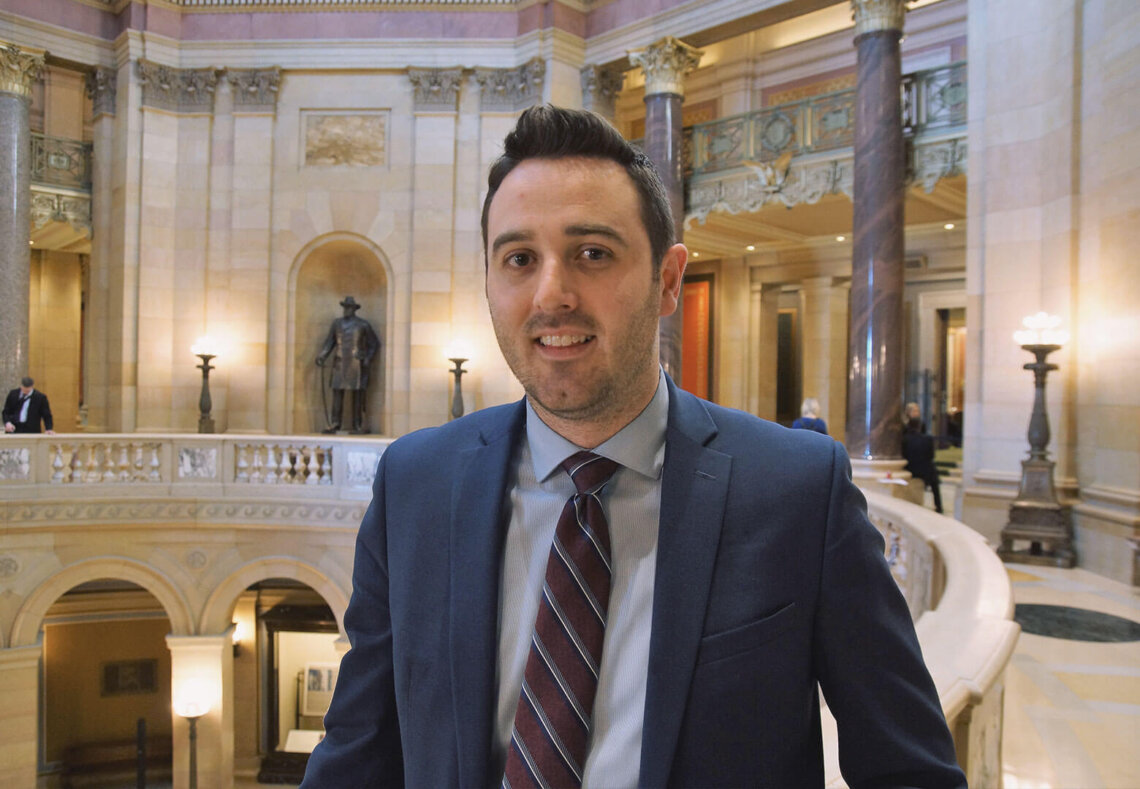 Logan O’Grady: A Cog of the Democratic Process

During the legislative session, the Minnesota State Capitol is abuzz with activity. The conversations of lawmakers, reporters, and tourists mingle as they echo through the halls of the 1905 building. Logan O’Grady is in the middle of all that action—right where he wants to be.

“I love working here every day,” O’Grady says. “You come here, and you feel lucky that you get to engage in this process, in our democracy.”

Logan O’Grady is in the middle of all that action—right where he wants to be.

O’Grady, 32, who graduated from Mitchell Hamline School of Law in January, works for the Minneapolis firm Larkin Hoffman as a lobbyist. He represents a wide range of clients—from government organizations to private companies. “It’s a really diverse set of clients,” he says. “That makes it fun but also very busy because you’re jumping from committee hearing to committee hearing.”

Yes, O’Grady knows that lobbyists often get a bad rap as “money people.” But in his view lobbyists in Minnesota—thanks to rules that restrict gifts to lawmakers from those trying to influence them—are more akin to subject matter experts who work hand-in-hand with lawmakers.

O’Grady’s path to the Minnesota State Capitol started a decade ago. After he graduated from the University of Wisconsin-LaCrosse, he spent a year in London, where he earned a master’s degree in international relations. That got O’Grady a job in Chicago working for the Canadian government on foreign policy, diplomacy, and trade.

While attending a conference in Minnesota in 2013, he met then-state Sen. Leroy Stumpf, who offered him a job on his staff the next day. O’Grady worked for Stumpf until his retirement in 2017. During that time, O’Grady was also attending law school part time. He graduated from Mitchell Hamline in January but will take the bar exam in July to give him more time to study after this year’s legislative session ends.

Having a law degree isn’t required to be a lobbyist, but O’Grady says his time in law school taught him how to see issues from all sides and find new ways to solve problems. Having knowledge of the law—even the 1L classes where he studied rules of statutory construction—has come in handy when drafting ideas for legislation.

Don’t think because you’re in law school you have to do just one thing. You can make your own path.”

By combining his work in government and politics with a Juris Doctor, O’Grady has created a niche for himself as a lawyer/lobbyist. But that process took time. O’Grady says he wasn’t quite sure what he wanted to do when he started law school, but he sees that exploration as a benefit, something he wants future and current law students to consider.

“Don’t think because you’re in law school you have to do just one thing,” he says. “You can make your own path. That’s what a law degree is for.”