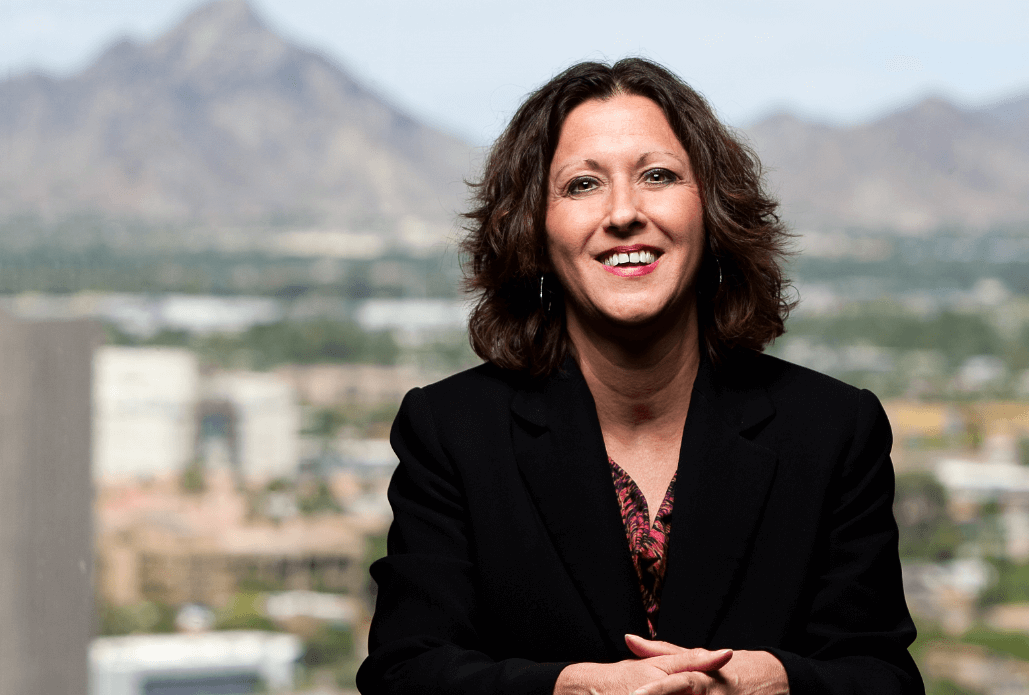 In an ever-evolving field, intellectual property attorney Maria Crimi Speth has found the adventure she always wanted in a career. An avid educator – and student – Speth has made a strong impact on the trademark scene. Striving to always improve, this innovative lawyer has captured our attention.

In her earliest memories, Speth recalls dreaming of life as a Bond-like spy. As her mind matured, her dreams settled on a career in the FBI. She entered college with the hopes of becoming a police psychologist, like the profilers popularized in “Criminal Minds.”

Much to her mother’s joy, Speth learned that mathematics and science were not her strong suits and that public debate was much more her style. “In my senior year, I decided to go to law school,” she said.

“My mother was the biggest influence in my life in every way,” Speth said. “She taught me to work hard first and foremost. She taught me that I had the ability and the talent to make anything happen if I did the work. She was my most important mentor.”

Speth’s mother passed in April 2013, but she fondly recalls her mother’s pride in her profession and her mother’s relief that her ambitions in the police force were unrealized.

“I also got super lucky to find my husband,” Speth said. “Unlike many men, he was never intimidated by my career. He offered to put his career on hold to take the main role in raising our kids. He has been my rock. I’ve got superman for a husband. Not to be too cliché, he is the wind beneath my wings. He makes everything possible. Just like my mom, he is my biggest supporter.”

Within this field, Speth is able to focus on an ever-changing industry, especially with her focus on the tech and Internet industries. “I like that it never gets old or boring,” she said. “Most of my clients are more high-tech with high Web presence. They’re always keeping me on my toes.”

When Speth first focused on intellectual property, it was the tech companies that made up the majority of her client base. “Now, almost every company has some form of IP,” she said. “Historically, the brick and mortars didn’t have as much of a need for it.”

Thriving on how misunderstood the industry is, Speth takes gratification in busting myths and providing clear answers. “It’s so important, so valuable. The tangible assets might be worth $100,000 while the business is worth millions. The difference, the value, lies in the intangibles, reputation, branding, etc.”

Speth has also come to enjoy the partnerships she has formed with those creative roles. “Inventors, writers, artists, musicians…. They typically have a lot of IP needs and sometimes lack the business and legal savvy to implement them. I look at our relationship as a partnership of our strengths, their creativity with my legal and business knowledge. Together, we create value for their business.”

Today, Speth is a shareholder with Jaburg Wilk. As a member of the board, she and the rest of the shareholders play a role in all policy decisions. While many attorneys find the leadership role a distraction from their legal responsibilities, Speth shares that she enjoys it and the opportunity to mentor others in the firm.

Speth was originally drawn to the firm because of the entrepreneurial spirit and the focus on learning. That drive has not diminished in her time there. A few years ago, the shareholders created a document for the firm, the JW Way – 21 fundamentals that define the culture of the firm. “We had just celebrated 30 years and we were looking for a way to solidify our sustainability. We know the firm needs to have a life force beyond the current partners and shareholders. It rose out of the culture of our firm. We recognize that they are partially aspirational; we’re all human. It’s a reminder, however, for when you fall off the wagon. We want to be able to question ourselves and hold ourselves to the standards of the type of firm we want to be.”

The list of 21 fundamentals is available on the firm’s website. The list includes a range of maxims, including to deliver outstanding legal advice, to treat clients’ money as if it were your own and – quite succinctly – not to be a jerk and to always take the high road.

Speth’s drive to always educate herself and others has led her to many different experiences.

Having sought to improve her own abilities, she has attended seminars like CEO Space and PSI Seminars. “CEO Space was originally mostly a personal development and motivational community. Today, it is more of a business community. I currently teach there. Their programs helped me to understand how my brain is wired and started me on the path to finding my own success. Through them, I was able to see that by finding financial success, I would be able to give back to others. It’s a really cool place to learn about yourself.”

Through those programs, Speth has been able to achieve the success to give back to others, including the Southern Poverty Law Center, Teaching Tolerance and The Human Rights Campaign. The Hunger Project is another of Speth’s favorite organizations. “They mostly focus on lack of food in foreign countries,” she said. “Realizing that it isn’t about a lack of food but disenfranchisement, they empower women to make changes. The organization goes in and trains women, so they can speak up and implement change.”

Morris Dees, the founder of the Southern Poverty Law Center, is one of her legal heroes – along with Abraham Lincoln. It is their work for the underdog that originally drew her attention. “I’ve been a supporter of the group since college,” she said. “They use the law to protect people from discrimination. They’re known for going up against the Klu Klux Klan and taking on all kinds of stereotyping. They fight any type of hate or extremism. I like that they fight for the small guy, the victim of injustice. I like that they find justice through the legal system.”

Outside of the office, Speth turns to yoga and meditation to open her mind. Her goal is to be able to hit the mat twice a week. “Yoga gives me strength, flexibility and balance – mentally and physically. I tried to mediate every day,” she said, “but I just don’t have the patience.”

Looking to the future, Speth aims to become the best trademark litigator in the state. How does she plan to measure this accomplishment? “I would need the best knowledge of the law and the procedure. I would need to be fair to the clients, respected by the judges, and get good results for clients,” Speth said.

THE FUTURE OF IP LAW – TODAY

In such an evolving field, Speth is able to learn about new industries and changes with each matter. Recently, the new gTLDs have held her attention. There are 1,930 applications for domain name extensions; ICANN has been issuing them a few at a time. They’re planning to roll out more than 1,000. “Personally, .ninja is the most interesting extension I’ve seen yet. I’m monitoring them as they roll out and helping my clients consider the ramifications for their business and their brands.”

Speth has also handled hundreds of cases under the Communications Decency Act, a federal law that protects websites from liability for statements made by its users. “Simply explained, if I lie on Facebook about someone, then Facebook isn’t responsible for what I post.”

As for Speth’s immediate future, she is most excited to be jetting off to Italy with her family. With 30 years of marriage under their belts, the couple will be experiencing the country for the first time. Their children will join them on the adventure.