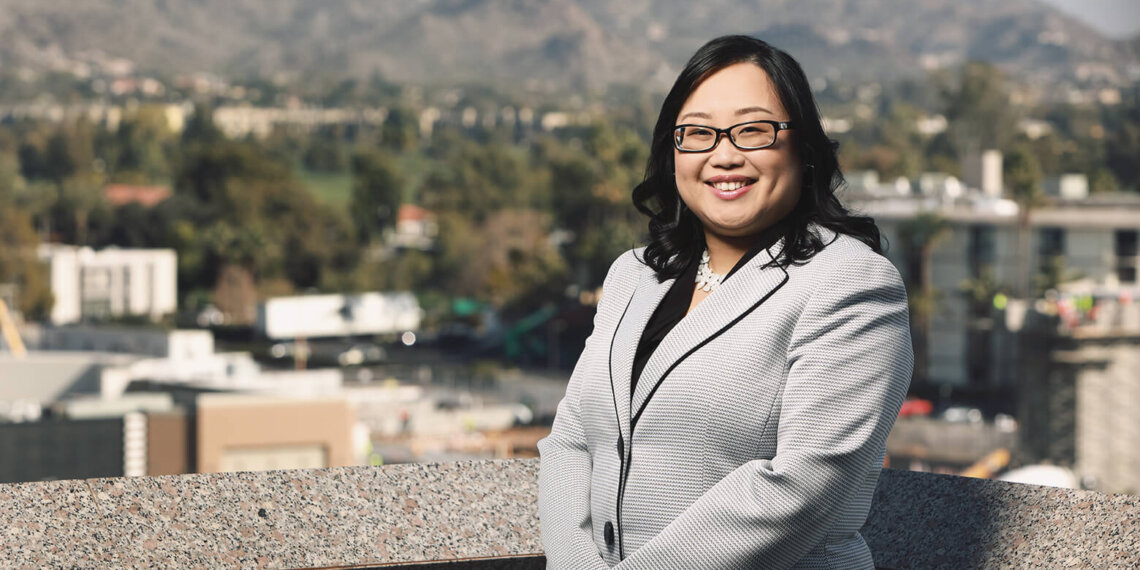 May Lu: Driven to Excel

May Lu, a partner at Tiffany & Bosco, P.A., can’t remember a time when she wasn’t driven to achieve. A first-generation American, Lu spoke fluent Mandarin as a child and learned to speak English in ESL classes. During her teen years, the future National Merit Scholar worked hard in her family’s business while also excelling academically in school. Following high school, she supported herself and paid her own way through college and law school. The top-rated transactional business attorney credits her experiences as a child of immigrants for instilling in her a strong work ethic and the importance of education that have benefited her in all areas of her life.

“My mom is Chinese but born in Vietnam,” Lu says. “Thanks to a benevolent Mormon woman who sponsored my mom and grandmother to the United States, they were able to obtain asylum here as “Vietnamese Boat People” refugees. My dad grew up during the Mao era of re-education through labor in China and had to go to work on a farm instead of going to high school. As the third son, he usually wouldn’t have had the opportunity to leave China—usually those opportunities are reserved for first sons only—but his brothers did not want to go, so my father came here to go to school, and met my mom.”

Her family moved from Utah to Phoenix when she was five years old, where they owned and operated a Chinese restaurant. Working in the restaurant convinced Lu that taking over the family business would not be her path in life.

“I knew I didn’t want to work in a restaurant and had to find a career that could support me and my interests,” she says. “In high school I had participated in mock trial and thought it was interesting at the time. As an undergrad I decided to pursue an economics degree thinking that I would work in business somehow or teach—but realized that I would rather be a lawyer than an economist after doing well on the LSAT exam.”

With a bachelor’s degree in economics, a minor in Spanish, and a certificate in international business law, Lu’s choice to focus her practice in business and corporate law seemed a natural fit. The decision proved to be the right one for the energetic and highly driven attorney. She has held the prestigious title of Super Lawyer’s Rising Star in mergers and acquisitions for seven years running—from 2012 to the present. In addition to bringing that expertise to the firm’s clients, she lends her knowledge in this area to committees for the American Bar Association’s and the Arizona State Bar’s Business Law Sections. Not only has Lu assisted in the legislation that created the Arizona Entity Restructuring Act, she is also actively involved in helping draft model short form purchase agreements. In addition, she brings her legal chops to the firm’s business divorce and corporate business planning and formations practices.

Lu came to work at Tiffany & Bosco in 2008, after working as law clerk for Judge Lawrence F. Winthrop of the Arizona Court of Appeals following law school. During law school, she interned at the Pima County Attorney’s Office and clerked at the Pima County Superior Court. She was also managing editor of the Arizona Journal of International & Comparative Law and had her note on The New York Convention on the Recognition and Enforcement of Foreign Arbitral Awards published. Lu’s initial experience working in the legal field had come about earlier, however. While getting her undergraduate degree in college, Lu had supported herself by working as an intake specialist at the personal injury firm Goldberg & Osborne, also known as “The Eagle” to Phoenix locals.

Since her early years working in the law, Lu has achieved notoriety among the legal community and her business clients for her acumen in solving complex business problems and closing transactions. With strong communication skills that took root when she was a child helping her immigrant parents, and an organized and detail-oriented personality, she excels in working on cases that need organization and have a lot of moving parts.

“I especially enjoy helping clients buy and sell businesses,” she says. “I am known for being the ‘director of follow through’ to get transactions closed and I enjoy the challenge of getting to the finish line.”

I am known for being the ‘director of follow through’ to get transactions closed and I enjoy the challenge of getting to the finish line.”

Lu also brings her energy and expertise to giving back to the legal profession and the local community. She has been on the Arizona Asian American Bar Association’s (AAABA) board of directors for several years and is now its president. She successfully chaired the soldout annual scholarship awards banquet for AAABA held on March 28, 2019. She serves as the pro bono general counsel for ACLU-Arizona. She volunteered with Arizona State University’s Sandra Day O’Connor College of Law’s Business Legal Assistance Program, for which she was awarded the Outstanding Volunteer Lawyer honor for 2011. She also believes in the importance of mentorship and informally mentors law and undergrad students.

Knowing that to be a good mentor means also soaking up the knowledge and advice of others, Lu appreciates the mentorship of Tiff any & Bosco’s Jim O’Sullivan. “He is both my sponsor and mentor,” she says. “A mentor is someone who will help you identify and reach your goals, and sometimes make you try something that you otherwise might not. A sponsor, on the other hand, will tell others of your accolades when you are not or cannot be in the room and sees you as his protégé so he is invested in your success. He is happy when I succeed and even happier when I mentor others based on what I learned.”

As someone who easily gets along with a wide variety of people and personalities—a beneficial trait she brings to serving her clients—Lu loves to get out in the world and discover new people and cultures. She tries to take an international trip every year and has the impressive goal of visiting 40 countries before her 40th birthday. She is getting close to achieving that goal—10 more countries to go! Recent trips abroad were to Cancún, Mexico, Central Europe including Poland, Hungary, and Slovakia, and Hong Kong and Macau, China. When she travels, she prefers the architecture, buildings and bright lights of big cities to smaller towns.

“I like city life,” she says. “I love all of the lights that turn on at night. I love learning about different customs, cultures and peoples. It really broadens your horizons and helps you understand people better to see things from their perspectives.”

I like city life. I love all of the lights that turn on at night. I love learning about different customs, cultures and peoples. It really broadens your horizons … “

“I do like coming home, though,” she adds. “And I can’t imagine living in any other place than Phoenix.”

At home, she enjoys trying new restaurants with her husband, Bill Dyjak, who is a realtor in the Phoenix area. The couple share their home with a betta fish named Tianbao, named after a Chinese pirate operating in the South China Sea in the late 1700s. Lu is also very close to her younger brother—the siblings are only 14 months apart—who lives in the Midwest with her two nieces and with whom she enjoys visiting. She is also an avid reader of fiction.

Asked about the most important lesson she’s learned in school, life and her career, Lu says: “Over time I’ve learned your reputation is everything so be nice to everybody, or at least be cordial. You never know when you will need a favor from someone or have to interact with them.”

For this Super Lawyer, understanding the law, business and her clients, has taken her very far already…and Lu hopes her reputation will continue to grow.

“I want to continue to build a reputation in the legal community as a seriously good business transactions attorney,” she says.