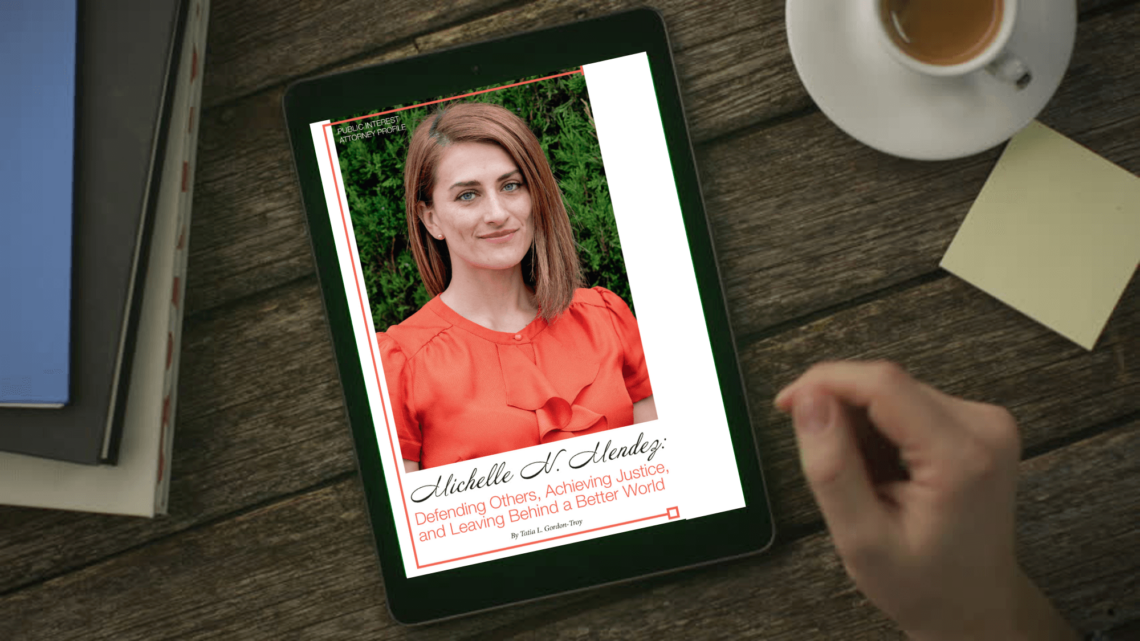 Michelle N. Mendez has devoted her legal career to serving the immigrant population. Because of her dedication, she has been the recipient of numerous awards and accolades, including the 2014 Rotary International Paul Harris Award and the 2015 American Immigration Lawyers Association’s (AILA) Joseph Minsky Young Lawyer Award. In addition, Mendez was recognized as a Very Important Professional in Maryland by The Daily Record in 2014.

Mendez works for the Catholic Legal Immigration Network Inc. (CLINIC) as senior attorney of training and legal support and manager of the new defending vulnerable populations project. She is an accomplished author and editor, having recently updated AILA’s Representing Clients in Immigration Court, now in its fourth edition. Mendez is a native Spanish speaker, originally from Medellin, Colombia, who also speaks French.

I met with Mendez to discuss her aspirations and what led her to the practice of immigration law. She spoke about her work experience after college, which made her realize just how vulnerable immigrants are in this country, “as there is no Sixth Amendment right to counsel in immigration court proceedings,” Mendez said, “despite what is at stake, which includes death in asylum cases.”

Mendez reflected on the fact that immigrants in the United States are facing difficulties in a number of contexts. “I chose to defend the rights of immigrants because they are among the most vulnerable and deserving of justice, but also because we best protect everyone’s constitutional rights and American exceptionalism when we help the least among us.”

Mendez added that if she weren’t working to further the rights of immigrants, she would be representing those on death row. “Honestly,” she said, “for many immigrants on deportation row without the right to counsel, they may as well be on death row despite the lack of a criminal record.”

Mendez has made a point of working with nonprofit organizations – such as CLINIC and her previous employer, Catholic Charities of the Archdiocese of Washington – where she has flourished professionally and personally. And even though she could reap a higher salary in the private sector, Mendez is not motivated by material things because she believes she has a higher calling.

“I am motivated by defending others, achieving justice, and leaving behind a better world than that into which I entered,” she mentioned. And working in the nonprofit sector allows her to fulfill these motivations. “I can focus on the merits of a case or a project without concern for monetary payment,” Mendez said. “It is about more than the bottom line at nonprofits; it is about recognizing and respecting human dignity.”

Mendez advises students who are graduating from law school to look for ways to bring about positive change in the lives of people.

“Use your law degree to further justice,” she said, “even if that means taking a lower paying nonprofit or state government job. You will be happier and enjoy a feeling of purpose because the experience and human connection to clients will be more meaningful.”