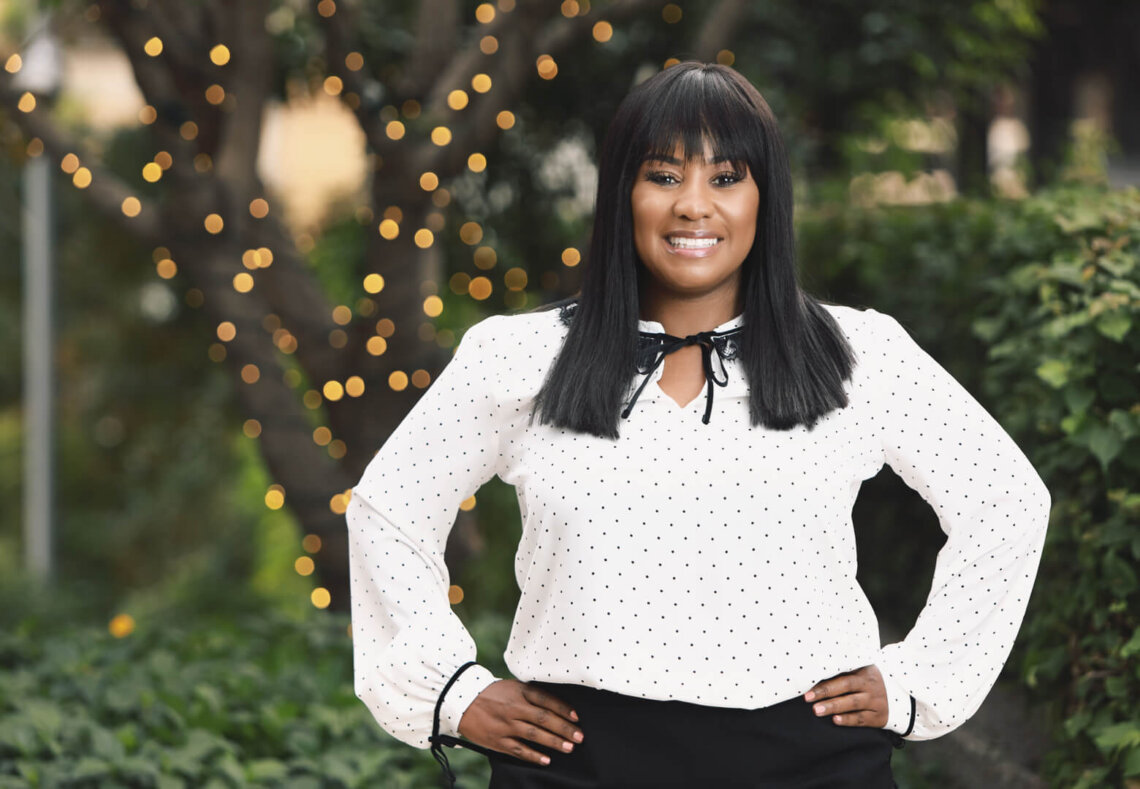 [dropcap]D[/dropcap]ecorating Nicholle Harris’s office wall is a quote from Supreme Court Justice Thurgood Marshall that she believes personifies her career growth. It is also her driving force in helping others progress. The quote reads: “None of us got where we are solely by pulling ourselves up by our bootstraps. We got here because somebody—a parent, a teacher, an Ivy League crony or a few nuns—bent down and helped us pick up our boots.”

For Harris, a partner at Gust Rosenfeld practicing in public and municipal law, mentorship has always played an important role in her life. It was the encouragement of her fourth grade teacher who was married to a lawyer who told her to follow her dreams that first set Harris on the path to her successful career. Harris was pleasantly surprised when she heard her teacher yelling from the stands during her law school graduation in 2007. She has maintained a relationship with that teacher over the years.

Harris’s interest in the law developed at an early age. She remembers her first introduction to the legal field while watching the television show L.A. Law. By the age of 10, Harris had firmly decided she wanted to pursue a career in the law.

In spite of the television show’s dramatic courtroom scenes—about which Harris laughingly notes that defendants confessed and trials were easily and neatly wrapped up in an hour—Harris did not have an interest in litigation. She knew she would enjoy the transactional side of things and aspired to serve as in-house counsel for a corporation.

Prior to going to law school, Harris spent time working at an ad agency in California pursuing her second career goal of becoming an art director. That career diversion came about because of her interest in advertising, so Harris decided to get her undergraduate degree in business administration and marketing. However, the desire to pursue a career in the law never left her and after a few years in the marketing field working as a media buyer for McCann-Erickson in Los Angeles, she decided to return to the University of Arizona for law school.

“I appreciate her candor and her support.”

“Susan has been a mentor to me and has helped me navigate the world of private practice as I’ve progressed from associate to partner,” Harris says. “I appreciate her candor and her support.”

Harris found her niche when she joined the municipal law practice group at the firm, serving as general counsel for various municipal corporations across the state. She became a partner at the firm in 2016.

In her work at Gust Rosenfeld, Harris represents her clients in negotiating real property transactions, leases, contracts, and intergovernmental agreements. She has special expertise in procurement law, public records law, and code enforcement.

“I handle everything for the city or town,” Harris says. “It is the perfect fit for me and what I envisioned myself doing when I thought about a career in the law.” Harris enjoys the challenge that comes with working with municipalities and dealing with various areas of the law.

“As the city attorney, I act as general counsel to many different city departments and have to resolve a variety of issues,” she says. “For example, I work with human resources on employment matters, the police department on nuisance crimes, the fire department on purchasing a firetruck, and the economic development department on land use and real estate transactions.”

This personable and driven attorney has received numerous accolades for her leadership in the legal field and the Arizona business community. Harris knows that all of her accomplishments are because of the people who have helped her along the way.

A VILLAGE BEHIND HER

Harris moved from California to Arizona with her family when she was 3 years old. She grew up in the west valley and attended Maryvale High School. She earned both her undergraduate degree and Juris Doctor from the University of Arizona. Harris was the first of her immediate family members to graduate from college. Her family was 100 percent behind her pursuit of college and a legal career.

“They are very proud of my accomplishments and remind me often to take time to celebrate the successes along the way. … When you have the support of your village behind you, you can go places you could not have ever imagined.”

“From an early age my mom, dad, stepmom, and brother always told me I could do anything I wanted to do and encouraged me to not let our socioeconomic status deter me,” Harris says. “They are very proud of my accomplishments and remind me often to take time to celebrate the successes along the way. Their support, along with the support of my friends and mentors, has propelled me in my professional and personal life. When you have the support of your village behind you, you can go places you could not have ever imagined.”

Harris acknowledges that she has greatly benefited from the mentorship of others and she actively reaches out to mentor and provide that experience to other young minority students and professionals. Harris’s philosophy and approach to mentoring is that it is not just a top to bottom relationship, meaning you are mentored by those above you and you mentor those below you; the mentor relationship also extends to the left and the right of you. There are colleagues, law school classmates and other counterparts who are an integral part of a mentor and support circle.

Harris mentors high school, undergraduate and law students, as well as young attorneys. As the chair of the firm’s diversity committee, she looks for opportunities to reach out to diverse candidates for internships and clerkships. Harris and the firm collaborate with the Maricopa County Bar Foundation’s Diversity Legal Writing Program, which works to improve the retention of minority lawyers in the state. A student from ASU Law School who came to Gust Rosenfeld as a clerk through the program is now an associate with the firm, and mentored by Harris.

Harris also has worked with the University of Arizona Black Alumni group doing outreach to minority undergraduate students. Through that organization she has mentored many students, including a young man now in his 20s, who is preparing for medical school in New York.

She mentors law students through the ASU Black Law Students Association, some of whom now work for judges or are associates at private firms. She also works with students from her former high school through the Arizona State University Diversity Pipeline to Law program, preparing them for the regional moot court competition. Harris states, “It is rewarding to stand in front of a group of minority students and say, I once stood in your shoes and you can also achieve your goal of becoming a lawyer.”

When asked how she sees the legal profession evolving for women and minorities, she says, “I was just looking at some statistics on this issue and the numbers for African-Americans are still stagnant and have been for the past 10 years. Women of color remain underrepresented as law firm leaders and over represented among the attorneys who leave their firm.

“When I look at my own progression, I know I am outside the norm, which is why I acknowledge the unique positions I hold. I am a partner and the chair of the diversity committee at Gust. I have hope for the future, which is why I continue to try and reach back and mentor younger attorneys—black women and black men too,” Harris says.

” … I have hope for the future, which is why I continue to try and reach back and mentor younger attorneys—black women and black men too.”

In addition to career mentoring, Harris finds time in her busy schedule to perform community service. She has served on several charitable boards, most recently with the Tom Tom Dance Foundation, a nonprofit that brings dance to low-income, minority kids.

For several years, as a member and president of the Arizona Black Bar (ABB), Harris was involved with holding community forums on a variety of issues such as election procedures, officer involved shootings, and natural hair styles in the workplace and the law. She has worked with ABB members on highlighting issues related to diversity on the bench and advocating for the appointment of black lawyers to the judiciary. Harris also performs other work through the firm’s volunteerism program.

Away from work, Harris enjoys traveling and visiting with family and friends. She has plans to visit the African American Smithsonian Museum in Washington D.C. and to visit Morocco this year. Her mother and brother are near her in Phoenix and her father lives in Tucson. Sadly, she recently lost her step-mother to cancer and that experience especially, has focused her attention on spending time with people important to her and adjusting her priorities. Harris loves hot yoga. She also hikes and takes spin classes.

What is she most proud of in her career?

“It is a huge accomplishment to be a black woman and a partner at a private law firm in Arizona,” she says. “I’ve worked extremely hard to get here and look forward to the next stage of my career.”