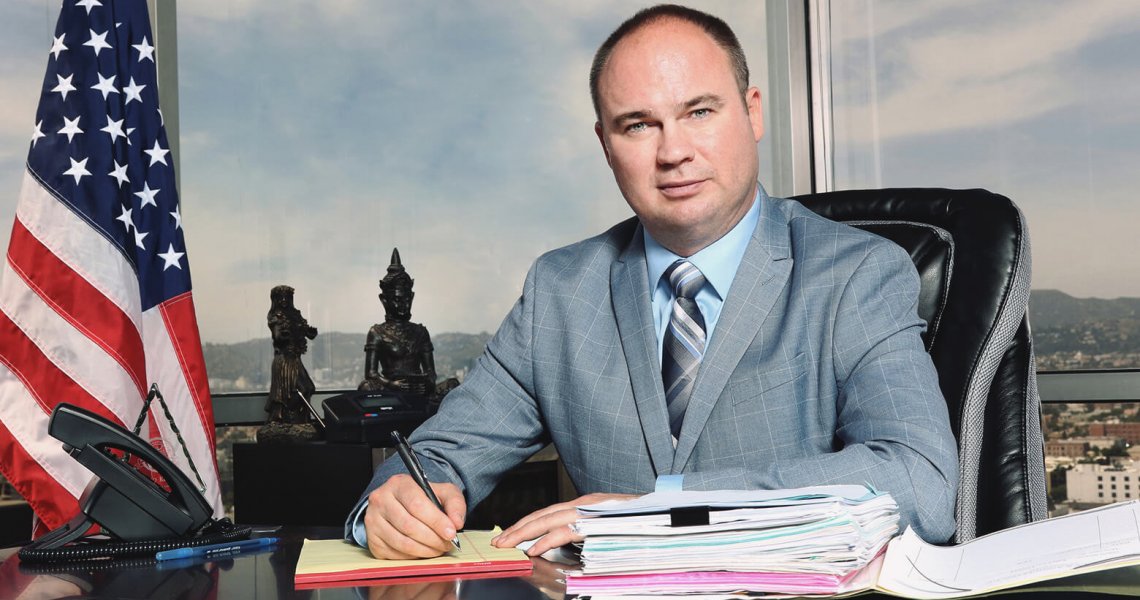 When your life has already taken you to the four corners of the earth, what else is there to do as an attorney but practice in them?

That is the feeling of Attorney of the Month Petro Kostiv, who has answered the call to service in almost as many nations as he has specialties. Kostiv—whose practice groups include immigration, employment, personal injury and transportation law—has offices around the globe.

“The law is an international commitment with which, we as attorneys and citizens of the world, must constantly engage ourselves in court, in our studies, in our minds, and most importantly in our hearts,” he says. “Law is not a domestic affair.”

No one knows that better than Kostiv, who fled Ukraine at 18 when it was overrun with mafia and general lawlessness, in what he describes was a “very difficult moment” for his native country. Raised by his grandmother, Kostiv’s parents were already in the United States, which afforded him the opportunity to get a green card.

Not speaking a word of English, he enrolled at Long Beach City College in an “extremely basic” ESL class. From there, he says, it took about a year and a half to reach college-level English and achieve an associate’s degree not only in the language but on it.

“It was quite an effort to learn English, and even harder to get a degree in English Literature,” he says. “I insisted on taking as many English classes as I could, including Shakespeare, modern American literature and the works of J.M. Coetzee, a South African author who won the Nobel Peace Prize for Literature.”

“I am a big soccer fan and an active player,” he says. “When I was playing for Long Beach City college, 90 percent of my teammates were Hispanics, and I was curious what they were saying. Some words were pretty colloquial as they were used during soccer games and not so much in classroom, so I wanted to make sure I learn both Spanishes—the formal and the Spanish from la calle.”

From community college, Kostiv went on to University of California Berkeley under a full-ride Regents Scholarship.

“It was quite an accomplishment considering I didn’t know any English in the beginning,” says Kostiv, who went on to earn a Bachelor of Arts in history.

Berkeley, he explains, made students choose a focus within their major. Kostiv selected Africa, with a further focus on apartheid.

“My thesis was about black spots—little spots of black people in the territories where apartheid was practiced,” he says. “They didn’t kick out all the black people, but they were not supposed to be living with white people at the time.

“It was incomprehensible to me how people can fully—legally and physically—live separated just because of their race.”

He researched the same subject more fully after graduation when he spent over a year in South Africa at the University of KwaZuluNatal for a master’s degree in political science. Like the British system, a master’s requires a long dissertation.

From Africa, he was off to University of Michigan Law School in Ann Arbor. While there, he was able to spend a semester working in Geneva, Switzerland, with South Centre, an intergovernmental organization of developing nations, in a program addressing global warming.

“If I had had any doubts about it before I started my work with the South Centre,” he says, “I finally knew this is a huge world problem which one day can hurt the planet and all of us, big time.”

Back in Ann Arbor, he says, corporate law looked like his path, but it was something he couldn’t warm up to.

“I was ambitious to get a good job, but we were in really bad economic times,” Kostiv says. “I decided I was not going to pursue corporate jobs anymore. I didn’t have a feel for it.

“A lot of my friends are immigrants and I’m an immigrant, and I’m 100 percent fluent in a number of languages,” he continues, describing his change in direction toward immigration law. “Maybe it didn’t sound as lucrative, but I just wanted to do something that I felt like doing.”

The challenge with that — no immigration law class was offered at U of M. For that, he says, he had to get resourceful.

“I was asking for outlines and resources from friends of mine from different law schools to learn more about it,” he says.

Leaving many friends and a lot of snow behind in Michigan, Kostiv returned to Los Angeles to begin his law career.

“It was quite a story because I had a few dollars in savings,” he explains. “I opened a law firm with me and one secretary. Now I have more than 60 people working full time. It was a big, big change. I think we did it with passion.”

Kostiv’s on-field Spanish education came in handy when he opened his office in Koreatown, which he describes as the heart where the Central Americans are located. Also in the building was the General Consulate of El Salvador.

A friendship formed, he says, and conversations often turned to legal issues. Soon the Consulate General invited him to El Salvador to speak about immigration. Later, he formally invited Kostiv to observe elections there to ensure there was no corruption.

Kostiv, who now has an office in San Salvador, says he has visited the country upwards of 30 times. His fiancée, Marisela de Montecristo, was Miss El Salvador in 2018 and Nuestra Belleza Latina in 2013 on the popular Univision show. They are planning to get married within the year.

“I started going to political events,” he says, “and now I just go see my family.”

In addition to the office in El Salvador, Kostiv also maintains law offices in Miami; Tijuana and Guadalajara, Mexico; Guatemala City, Guatemala; and Kiev, Ukraine. A certification in transportation law has come in handy as he has traveled the world.

He says he performs a lot of pro bono work for immigrants, particularly for special cases.

“We have helped lots of families in need. Usually we help people who have special physical and economic circumstances,” he says, adding that blind children hold a special place in his heart. “It is based more on our feelings than on some sort of economic formula. We strongly believe in pro bono—very much so.”

Understandably, Kostiv says “a big chunk” of his clients are Central American. Cases, he says, often fall along the lines of, “My daughter was deported. Can we do something?” “They just kicked me out. I don’t know what happened and why the sent me back to El Salvador.” And “I went back to Guatemala and my green card expired.”

Some cases of the more than 5,000 cases Kostiv & Associates have handled are more serious. Kostiv recently represented a 9-year-old child born in Ohio, a citizen, who was detained at the border. He says when he presented the child’s documents to immigrations officials, he created a scandal.

“This is unacceptable,” Kostiv says. “How do you keep this child in a detention facility? There’s no way a citizen should spend a minute in immigration. It is symbolic of how messed up our system is.”

One recent client was seeking asylum in the United States after her daughter was cut up in 14 pieces.

“There’s so much going on in Central America,” says Kostiv, who regularly holds educational seminars in the region to provide the citizens information about immigrating to the United States. “People need help and no one cares.

“There’s not a single other U.S. immigration attorney practicing in Central America,” he continues. “People don’t know what to do and they don’t know where to go. No one goes there, and no one knows what’s going on.”

One of his biggest concerns now is for the plight of detainees under the threat of COVID-19.

“I am against the U.S. government for how immigration courts manage situations with the coronavirus,” says Kostiv, who is a member of the American Immigration Lawyers Association. “The disease can be spread in jail, and the government is making attorneys go to the jail in New York to file lawsuits.”

His passion for the plight of Central Americans doesn’t mean he has turned his back on his homeland. Kostiv, who served as president of the Ukrainian American Bar Association for two years, travels to Ukraine about three times a year to serve business clients at his office there and stays active in the legal community.

He says in addition to holding speaking engagements in Ukraine, when he was president of the UABA, he attracted “a whole bunch” of Ukrainian attorneys to the group’s conferences in the United States.

Also in Ukraine, he worked with a law professor to initiate the first class of its kind at Kiev University of Law, “Introduction to U.S. Law.” Key to the course, he explains, is the difference between the Ukrainian style of law, which takes after European model, and the United States, which relies on more case law.

In addition to his speaking arrangements in Ukraine, he has also conducted them in Argentina and South Africa. Could China be next? If not, it won’t be because of a language barrier.

“I am very active right now in studying Chinese,” says Kostiv, adding that it has been a tough but rewarding challenge. “I’m a linguist at heart, and I am profoundly fascinated with learning new languages.”

But it’s at his offices, he says, where he builds his close relationships with clients, and once they’ve used his team’s services, they return when they need legal help again.

“They will say, ‘Attorney, you helped my family obtain our legal status,’” Kostiv quotes. “’I now have an unpleasant family emergency unrelated to immigration. There are a bunch of other lawyers in that field, but I only want your firm to represent me because of the trust I have in you and your company.’

“It’s great to be known around the world,” he says, “but these interactions are the most rewarding.”