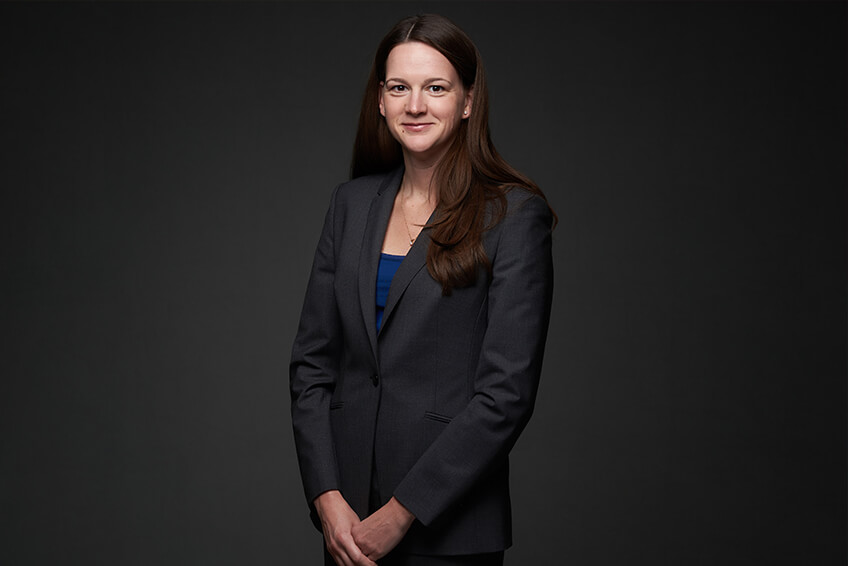 Meet Rachel Hughey, a partner at Merchant & Gould P.C. in Minneapolis, a preeminent intellectual property law firm with a reputation for guarding great ideas. In addition to her patent litigation practice in sectors including chemical technologies, medical devices, pharmaceuticals, mechanical devices and software, Hughey is a founder and co-chair of the firm’s appellate practice and has successfully handled numerous appeals as the appellant and the appellee. She is also committed to pro bono representation. In 2017, she and a group of firm associates she was mentoring were honored as Attorneys of the Year by Minnesota Lawyer for their victory in an asylum matter.

Hughey was on maternity leave with her second child when she talked with me. For Hughey, being “on leave” meant a rigorous schedule of working from home; traveling for CLE presentations in San Diego, Cleveland and Minnesota; and attending meetings with clients and the various boards on which she serves, while also spending time with her newborn. All that activity may not sound restful to most of us, but here’s the upshot for Hughey: she gets to choose. “I love that it’s my choice how much I want to be plugged in.”

If we backtrack to the early days of Hughey’s career, the picture comes into full focus. Raised in a family of engineers, Hughey grew up with an expectation that she would also make her mark in the sciences. However, she loved speaking and writing, and by the time she finished high school, she knew she would have to break it to her family that she was destined, instead, to become a lawyer. She completed her undergraduate degree in chemical engineering at the University of Wisconsin and began law school at the University of Minnesota with the intention of writing patents, but after a summer internship with Merchant, she realized litigation was her path.

Early in her career, Hughey clerked for the Honorable Alvin A. Schall of the United States Court of Appeals for the Federal Circuit, an experience she described as nothing short of “magical.” That insider view of the appellate system, along with the relationships she developed with her judge and other clerks, helped shape her career and signaled that she had the mind of an appellate lawyer. Playing to her strengths, she has widened her appellate practice to include consulting on appellate cases not only for her firm, but for other firms as well.

“I see myself as a very dispassionate observer of cases,” she said. “I like coming into cases where things are tricky and not so black and white. I think that’s where I bring a lot of value. Trial firms hire me to consult on their cases, and for me, it’s fulfilling and fun. I also have clients who invest in litigation who hire me to evaluate the strengths and weaknesses of cases for them.”

I like coming into cases where things are tricky and not so black and white. I think that’s where I bring a lot of value.”

Hughey wrote an article for “The Journal of Appellate Practice and Process” in 2010, titled, “Effective Appellate Advocacy Before The Federal Circuit: A Former Law Clerk’s Perspective.” This widely-read article is assigned reading for moot court participants at a number of law schools.

Hughey has spent the majority of her career at Merchant, a place she says she loves to work. She has received many opportunities there to grow as a lawyer, moving from associate to non-equity partner in 2011, and finally to full partner in 2013. “I feel our firm is incredibly supportive of women and conscious of the realities that the struggle is potentially a little more difficult for women than for men. Our leadership, men included, are always looking for opportunities to promote women and make them more successful.”

She has also observed a trend among clients and judges that calls for more diversity on legal teams. “Clients are very interested in diversity. In their mind, I’m a first-chair, senior woman, but they are still asking, ‘Where are the women coming behind you?’ We have many talented young associates who are women. We’re hearing from clients that they’re looking for that development. It’s gratifying to see the practice continuing to evolve in that direction.”

If Hughey has a flaw, she says it’s not saying “no” often enough. She gives zealous service to numerous organizations, including the Volunteer Lawyer’s Network, University of Minnesota Law School Board of Advisors, and ACLU-MN, to name a few. Recently, she was named editor in chief for “The Federal Lawyer Magazine,” an honor she cherishes.

It’s no surprise that Hughey says she struggles to make sure work doesn’t overtake the rest of her life. She feels fortunate to be surrounded by help at home, including a wonderful nanny, parents and in-laws who are willing to pitch in with the kids, and a husband who is “very invested in making things run around the house.” That leaves just enough time for her to compete with her Masters swim team, run the occasional marathon (she ran the Chicago Marathon last year in her first trimester) and meet with her Wine and Classics book club, an assemblage of legal peers who also love reading. And wine.

I coach people to be happy and find a practice and a firm that fits. Doing that has made me a better lawyer, mentor and friend.”

Best of all, this talented trial and appellate attorney, wife, mother, community leader, athlete, scientist and book nerd is in love with her life. She is passionate about every one of these roles, and it is that passion that makes her shine in each of them. As a mentor in the law, she often gives this advice: “I coach people to be happy and find a practice and a firm that fits. Doing that has made me a better lawyer, mentor and friend.”