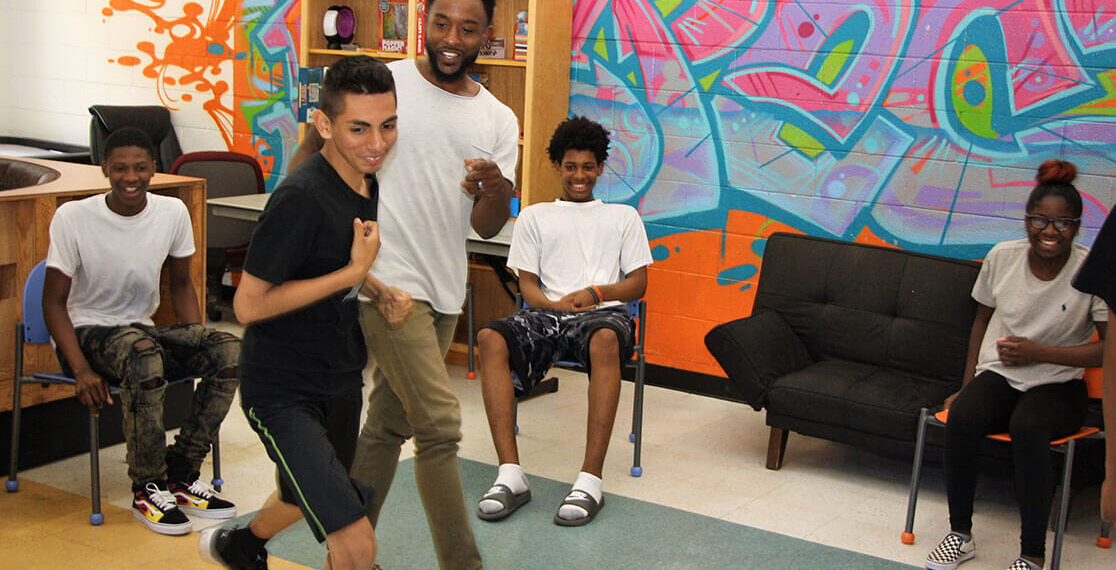 “Who likes pizza?” asked Arvetra Jones, director of student engagement and a family life coach with Durham-based Rebound. Only a few of the dozen or so high school students enrolled in the Rebound program at the Durham Teen Center raised their hands. “This was an exercise to urge the kids to be more outgoing and participative,” explained Jones.

Rebound is a nonprofit, voluntary program for high school students in Durham who have been suspended for between one and 10 days. Attending Rebound during school hours fills in the gaps between suspension and the streets. “Rebound expanded the program this year to include in-school services and new approaches to disciplinary issues, deepening their involvement in conflict-resolution and restorative justice practices for students, with the ultimate goal of avoiding suspensions altogether,” said Rebound Executive Director Mike Friedman.

In 2013 when Rebound was launched, 5,235 students had received short-term suspensions from Durham Public Schools, an average of 29 students per day. Students are suspended for disruptive behavior, fighting, substance use, truancy, conflict with school staff or peers, and other violations of school policy.

“We know that suspensions and discipline problems in the school are often the genesis of behavior that can land a youth in our criminal justice system and that’s exactly what we don’t want,” said District Court Judge Amanda Maris, a member of Rebound’s board of directors. “We have to start looking at what may be causing or contributing to perceived behavioral issues, including an adult’s failure to properly identify a child in need and offer them the appropriate support before our children are responded to punitively and enter the justice system. Only then will we be able to stop the school-to-prison pipeline.”

“When the kids are in Rebound, it’s not considered a suspension. For every day they are here, it’s an in-school activity, so it’s not on their record,” explained Friedman. “This is a voluntary program. They could just as easily stay home. They come here, so that’s a success.”

A major component of the program is that a teacher from the public schools works with each child to keep them current on what’s being taught in the classes they are missing at school. “So, when they go back to school, they really haven’t missed ten days. If I had missed 10 days of algebra, I never would have graduated,” said Friedman.

“When kids come to us we have an opportunity to connect with youth and get to the bottom of what’s going on and provide them with additional resources in the community such as referrals to mental health or substance abuse treatment, literacy support, vocational or youth employment programs, pregnancy and STD/HIV services, conflict resolution, gang awareness, anger management, etc.,” said Friedman.

“Rebound provides a safe supportive environment for kids instead of potentially being at home because they are continuing their studies and staying academically on course,” said Maris.

Rebound operates at the Durham Teen Center and the Boys and Girls Club of Durham. It has a staff of six full-time and one part-time employees. The program is funded by federal grants, school funding, and private donations.

Rebound can provide services for up to 30 kids at a time. During the 2017-2018 school year, roughly 375 students participated in the program. Students are referred to the program by assistant principals or social workers. They are required to have parental permission to take part.

Rebound counselors monitor the progress of kids at Northern, Jordan and Southern high schools who were in Rebound for five to 10 days when they go back to school. “This is a new component of the program piloted by funding from the Governor’s Crime Commission. We want to continue to ensure youth receive the support they need. We’re touching base at school trying to make sure that the student doesn’t get suspended again,” said Friedman.

“We see a lot of our 16 and 17-year-olds in the Durham County jails with severe charges such as armed robbery,” said District Court Judge Shamieka Rhinehart who is a member of Rebound’s board. “I truly believe in programs like Rebound which prioritizes the importance of education and keeps them occupied because often that’s the root of why they are in that situation in the beginning.”

“Maybe there is not enough support at home, teachers may not be understanding the depth of their issues such as mental health issues that are keeping them frustrated. The programs here talk about those issues and listen to the kids,” said Rhinehart.

Enrollment in Rebound has been increasing. “Students have responded well to the small scale of the environment and the time and space to think through the issues that led to the suspension. When they realize that someone is going to listen to them, they gravitate toward that,” explained Jones. “From there, we are focused on developing a positive mentality and skills that influence everything around the student.”