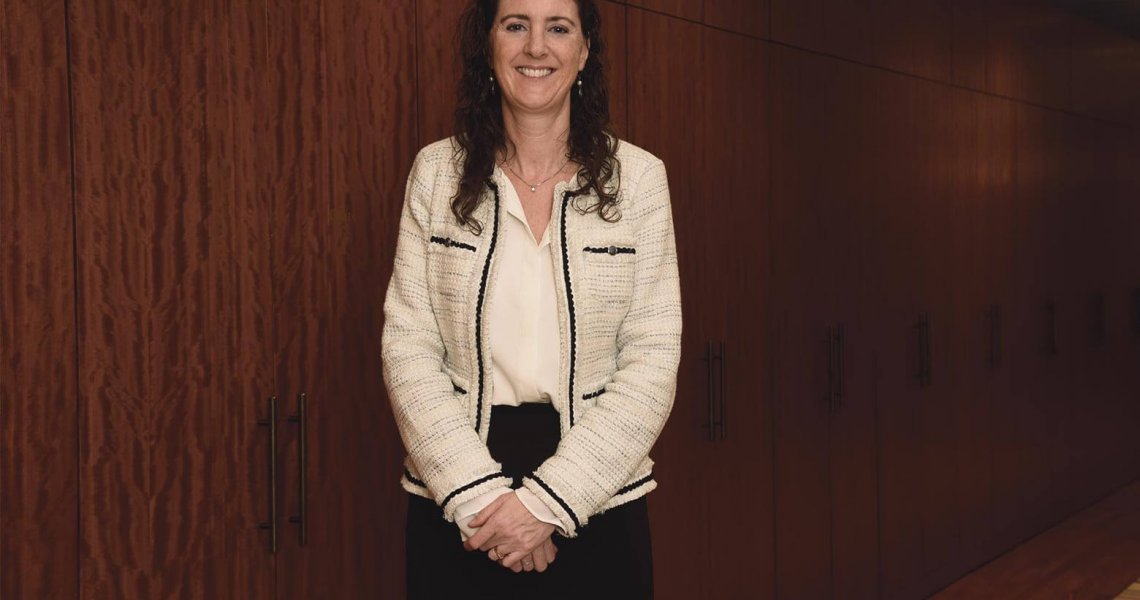 A woman who stands at a commanding six feet, two inches tall and speaks in a distinctive Scottish brogue, Rhona Schmidt certainly stands out among her colleagues. At Dorsey, where she has forged her reputation as an accomplished practice group and firm leader, Schmidt’s unique attributes and international perspective are regarded as striking advantages.

As a partner in Dorsey’s technology commerce practice group and a member of the firm’s management committee, Schmidt plays a key role in defining Dorsey’s culture and core values, and shaping Minnesota’s business landscape. At Dorsey, she is a champion of diversity who has helped refine and expand the firm’s flexible work policies, furthering its status as a trailblazer in the recognition, recruitment and advancement of diverse individuals. In her law practice, Schmidt has more than 20 years’ experience helping clients from a variety of business sectors to commercialize their technology products and services. She is an expert in structuring, drafting and negotiating technology product and services contracts, ensuring that businesses effectively license or outsource these assets.

Negotiating relationship contracts requires particular finesse, because the terms must be optimal for both sides if the parties are to maintain successful, long-term affiliations. Schmidt commented, “First, you have to understand the business objectives of both parties. If the needs of both aren’t met, then it will most likely not result in a long-term, happy relationship. I don’t believe in one-sided contracts, because I don’t think they work. It’s a lot like a marriage – both parties need to be getting something positive out of it for it to work. Second, you have to make sure the contract aligns the incentives of both parties. You have to get out your crystal ball and anticipate what could go wrong in the relationship, and then figure out how to draft the contract to address those anticipated issues. If you build in the right protections contractually, those provisions can help the parties work through the issue when it arises to continue the relationship, or allow terminating the relationship with minimal difficulty.”

Schmidt’s multicultural background strengthens her skill as a negotiator. “As a European, I was introduced to multiple cultures at a young age. Everybody there travels, so I’m used to dealing with new ideas, places and temperaments. That’s what I bring to the table when I counsel clients. I can both understand and relate to various and sometimes opposing cultures and help bring them together. I think you need to be able to do that when you negotiate for a living. You might not agree with someone’s perspective or approach, but you need to understand it and empathize with it.”

Schmidt described how Dorsey’s breadth and depth of collaborative lawyers also enhances the value she brings when solving complex problems. We have excellent diverse lawyers working across multiple areas of practice, and because everyone is so willing to come together to help solve problems, we are able to bring all of those perspectives to address a client’s issue. If I send out an email asking for help, there is always an immediate response from multiple people with different suggestions.”

Dorsey’s management committee is currently made up of an equal number of men and women. Schmidt said, “I think that’s a real advancement for an AmLaw 100 firm. Diversity is hugely important to our managing partner. We measure the impact of our selection, distribution of workload and client facing opportunities, compensation, and promotion processes on diversity, and make changes when needed. Many of our clients demand a diverse team, and we can provide it. I feel honored to be on a committee with these amazing people who are committed to making a difference in this profession.”

This question is often asked of Schmidt, who in addition to being a partner at Dorsey is also a wife and mother of four. Schmidt was raised by a single mother who cared for three children while successfully running her own business in Kirkcaldy, Fife, just a few miles north of Edinburgh, Scotland. She learned early on that a woman could juggle anything thrown at her.

So, how does she do it all? “You have to tackle one day at a time,” she said. “You can handle anything if you break it off in small chunks. A lot of people say you can’t have it all. I don’t think you can have it all at the same time, but you can definitely do this. And you have to have a good support system, which I’m grateful to have with my husband.”

Then, she added, “And retain your sense of humor.”

Schmidt decided at an early age that she wanted to be rich when she grew up. As a precocious 6-year-old, she asked her grandfather, an accountant, whether she could become rich working in his profession. He advised her, instead, to practice medicine or law, and opined that since she asked so many questions, she should probably choose the latter.

Schmidt did choose the law, almost on a dare, after her high school counselor — whose son was a lawyer — advised her that she should go into medicine, since the law was no place for a woman.

In the middle of earning her legal education, with honors, from the University of Aberdeen, Scotland, Schmidt journeyed to the U.S. at age 19 as part of a student exchange program and worked as a kid’s camp counselor at Ruttger’s Bay Lake Lodge in Minnesota. As fate would have it, she fell in love with a boat boy there, who, after three years of long distance romance — mostly kept alive via airmail — became her husband.

“After we married, we decided the only way to make it fair for both of us was to live in each other’s countries before we picked our home. I came here first.”

At the University of Minnesota, Schmidt was in the first class of the LL.M. program and, there, she revisited her legal thesis from the University of Aberdeen, this time looking at the issues through an American lens. “My thesis was about breaking the cycle of child sexual abuse by giving more help to victims, while recognizing that the abusers are often themselves victims. I was really interested in criminal and family law, but after completing two theses on such a traumatizing subject, I realized it was not something I could do for living.”

She continued, “After that, we went back to Scotland so I could complete my traineeship to be a fully qualified solicitor, and I practiced in the corporate group at a firm called McGrigor Donald in Glasgow. Then we made the decision about where to live. Ultimately, we knew we wanted to have a big family, and we knew our children would be tall since we are both tall. That was important, since my husband hates soccer, the predominant sport in Scotland, and he wanted them to play basketball and football. We also wanted our kids to have the American dream. So, we decided to come back to Minnesota to start our lives for real. We emigrated on April 26, 1998 with four suitcases, four hockey bags and $10,000 we had saved. That, and each other, was all we started with here.”

After returning to Minnesota, Schmidt took up the challenge of earning her legal credentials a third time at William Mitchell College of Law.

Schmidt describes her immigration experience as one characterized by frequent bouts of homesickness. “I came from a country I loved. I missed my home and family a lot. I decided the only way I was going to survive was to make our own family right way. I was five months pregnant when I came to Dorsey as a summer associate in ’99. That was the start of me thinking what a great place Dorsey is. At first, I didn’t tell anyone because I didn’t know if it would affect my opportunities. It didn’t, of course. I had my first son in October, took the bar in February, the ethics exam in March, and started at Dorsey in April ´00 — all with a brand new baby. Right from the beginning, this firm was there for me and helped me balance my family and practice. That’s one of the reasons I love being here.”

Throughout her 19-year tenure at Dorsey, Schmidt has been continually affirmed by the support she has received from the firm and her colleagues. Through the birth of each of her children, including two higher-risk pregnancies that resulted in periods of extended leave, Schmidt said she has always been made to feel she is a valuable member of the team. “When I asked for a year-and-a-half off after our third son, it was given without hesitation, and with two conditions: I come back; and I keep the firm’s Blackberry to keep in touch with my colleagues at the firm. After I came back, the firm put together a committee to discuss flexible work arrangements, and I was asked to be on the committee. The outcome is that since 2008 I have worked from home two days a week, sometimes more. Those are my most productive days, because I can work from 6:00 a.m. to 6:00 p.m. without interruptions and without commuting.”

Dorsey also offers a sabbatical program that allows partners who have been with the firm for 10 years or more to take 12 weeks off. “I used it during the summer of 2015 to travel around Europe with my kids. I think it’s important to be able to take some time out for family. Our work lives are really long, and there are a lot of benefits that come with taking a break and doing the things that are important to you. As a result of Dorsey’s continual commitment to me, I feel very loyal to this organization and would do anything to help them succeed. It’s so important to feel like you’re part of something rather than a replaceable cog.”

In 2018, Schmidt was honored as Partner of the Year. With it, she received two pre-paid flights to a destination of her choice. She will use the gift this year to take her husband to an eco-resort in the Amazon to celebrate their 25th wedding anniversary — another benefit from Dorsey that helps balance Schmidt’s working life.

Schmidt said her decision to try to have it all stemmed from a combination of her own childhood and her perceptions as a young solicitor starting out in Scotland. “Back in 1996 in Scotland, it appeared to me that women lawyers with children were viewed as either really good mothers, and therefore could not be such good lawyers, or really good lawyers, and therefore could not be such good mothers. That really bothered me. When we decided to have a family, I was determined that I would not be viewed that way. I wanted to be the best parent I could be, as well as the best lawyer I could be. There’s no question it’s an awful lot of work to do both, for all parents. But, you only get one life, so you may as well work really hard and play really hard. I love being a mother, and I love being a partner in a law firm like Dorsey. I feel very grateful that I found a home in the U.S. and at an organization like Dorsey where I get to do both and live a life that I love.”