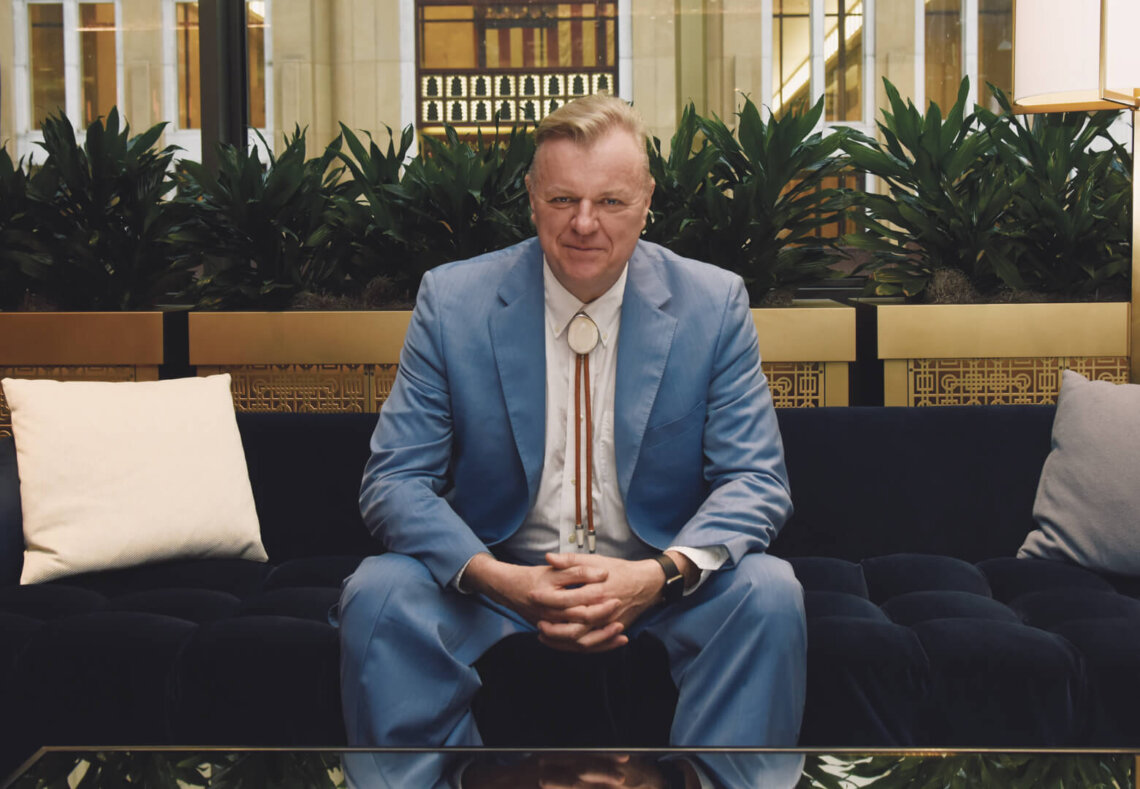 “You don’t get justice; you cause it to happen.” These words sum up well the impetus behind the distinguished law career of Robert Hill. For thirty-three years, Hill has orchestrated victories for the underdog against powerful individuals, commercial and government entities. His triumphs span state and federal courts across the nation and include an array of precedent-setting cases. Robert Hill Law has become synonymous with the fearless and unapologetic pursuit of justice in property tax and public interest cases.

Referred to by both admirers and detractors as the Gerry Spence of property tax law, Hill clarifies that for him, the practice of law is not a popularity contest. “I practice because I believe we are the people responsible for defeating authoritarian rule by furthering the rule of law,” he said. “If we attorneys don’t stand up for the little guy and take on corruption, nobody will. It’s why the founders instituted the rule of law — to prevent our darker angels from prohibiting our better angels from accomplishing equal justice under law.”

“You don’t get justice; you cause it to happen.”

Hill has long opted to work as a solo practitioner, to remain his own man, beholden to no one. However, Hill has a gift for assembling legal dream teams for difficult cases, and he counts among his trusted colleagues many of the most esteemed lawyers in the upper Midwest. He explained, “I don’t play like the other kids. When I am in a legal knife-fight I always bring a howitzer to the proceedings. My clients usually love me for that.”

“I’ve always fought for the underdog, and I am obligated to use all the instruments at my disposal. My practice is lean and mean in the sense that when I look at a legal problem, I’m trying to envision a strategic solution, so that I can bring to bear all the skill-sets necessary to solve the problem. I’m like a chef going to the pantry to pick the right spices. Only my spices typically are some of the finest appellate and trial lawyers in the nation.”

“I can do that because I have the kind of practice where I can afford to put together powerful teams, whether for trial or appellate work. I find the best legal talent I can because I don’t like to lose. And it doesn’t always mean winning outright; sometimes it means doing all that’s necessary to get a fair compromise.”

When I interviewed Hill, he was fresh from the heat of battle, defending a taxpayer in Anoka County from a disputed assessment in which Hill alleges tax officials destroyed evidence in violation of the Data Practices Act. “I expect the matter will get the attention of the Minnesota Court of Appeals and perhaps the Minnesota Supreme Court. I have a good track record in property tax because I find the right lawyers to get it right. Even if I’ve had an adverse ruling, most situations are not hopeless. The rule of law is not something you just look up, it’s the experience and perseverance you bring to the equation that ultimately makes the difference.”

During his senior year of high school, Hill moved with his family to Cambridge, Minnesota, transferring from what he terms a “precocious” Catholic school in St. Cloud to the local public school. It was there he met his future wife, Debbie Johnson-Hill. A high academic achiever, Hill was also a member of the football team. He still remembers vividly the Friday afternoon when he first met Debbie.

“The football players wore their jerseys on Fridays. Period. So, I’m in the library that Friday, when in comes this group of sophomore cheerleaders. There were three as I recall, but I only truly recall the one in the middle. She was 5 foot 2, blonde, and beautiful. She stares me down and says, ‘I didn’t know football players could read.’ Then she turns and prances like a peacock out of the library. I was smitten, completely in love. And I’m still in love.” They eventually married, and Debbie has been an integral part of Hill’s law practice for the past 12 years.

Back in Cambridge, Hill also encountered Debbie’s father, Dave Johnson, a ubiquitous lawyer and then-chairman of the Cambridge-Isanti School Board. Hill’s father, an educator, was hired by Johnson to ensure the local schools’ academic programs received equal priority to its sports programs — particularly football.

“You couldn’t help noticing the football team had new uniforms while the French club had nothing. Deb’s dad resented that the town was all about sports and not about the things that would equip kids to function in life. It’s not the same town now, due in large part to his untimely and premature death in the mid-1990s.”

Hill aspired to attend law school as a training ground for his true ambition — a career in politics. He says he has modeled himself and his practice after Johnson. “It was funny for me to come to a small town and hear all about this guy. I already wanted to be a lawyer, and I saw his impact on the town. I knew his reputation and the reverence people had for him. He literally took it over in the sense that when there were good things happening, he always seemed to have had a hand in it.”

“I think I always had the same thing in my character and attitude as Debbie’s dad. You fight for justice, and you never stop. It doesn’t matter what the legal hurdles to justice are, or what the other party says about your case. If you know you’re right, you fight until you’re out of options. I have always believed the law is the means to do right and solve problems for those who have either given up on the system or are about to do so.”

You fight for justice, and you never stop. It doesn’t matter what the legal hurdles to justice are, or what the other party says about your case. If you know you’re right, you fight until you’re out of options.”

Hill encountered more noteworthy figures on his path to the law. He entered Carleton College on a full scholarship, where he was mentored by Paul Wellstone, then one of Carleton’s political science professors. “I bonded with Senator Wellstone over my love of politics,” he said. Hill later worked as a volunteer for Wellstone’s first U.S. Senate Finance Committee — a campaign destined to shock the world in 1990 when then upstart candidate Wellstone became the only challenger to defeat a sitting United States Senator.

“Paul taught all of us that if Americans could summon the courage to have an honest, constructive dialogue centered on answering (collectively) three basic questions — Who decides? Who benefits? Who pays? — just compromise and good public policy were sure to be the result. I continue to believe this is sage wisdom for our current political troubles, particularly as an antidote for curing the artificial divisions brought about by those who seek to divide Americans instead of uniting us as the one people we actually are.”

Hill went on to Georgetown University, where he earned both his J.D. and M.S.F.S. in international finance. There, he was mentored by yet another professor who would challenge business as usual in Washington D.C., Madeleine Albright. “The most important thing she taught her students was to check your ego at the door. If you don’t, you’ll never be able to solve a problem. I think that became her most important ingredient in diplomacy. Never show disrespect. The moment you let your ego get in the way of your ability to manage your opponents, you’ve lost.”

“Nobody at the time would have said she’d get a job at the State Department, much less become Secretary of State. But she continued to solve problems and demonstrate her ability to play as a teammate. Nobody then knew what her contribution could be. But now everyone knows Secretary Albright as a shining example of what happens when a person lives passionately and enthusiastically, and always maintains personal and professional integrity in the heat of the political moment. Good things happen because you make them happen.”

We were all watching and feeling for the guy, when we hear a thump from the other side of the Supreme Court bench …. “

While attending Georgetown, Hill also had the privilege of making regular visits to the U.S. Supreme Court to observe the justices presiding over oral arguments. He recalled a particular anecdote that remains vivid in his memory: “It was funny, because the justices would sit pretty much as they are viewed — with Thurgood Marshall over on the left, and Antonin Scalia on the right. So, one day, Scalia was just torching this lawyer, peppering him with sarcastic questions and expressing his personal dismay at the ‘lack of coherent argument’ associated with the lawyer’s case. We were all watching and feeling for the guy, when we hear a thump from the other side of the Supreme Court bench. Justice Marshall had fallen asleep on the bench, and a clerk pulled him back up by the back the neck. I learned they’re just simple humans like the rest of us.”

When others have been unable or afraid to act, Hill has boldly taken on government entities which have assessed unreasonable, and sometimes unlawful, taxes against businesses in numerous states, claiming victories for Fortune 500 companies, manufacturers, hotels, national retail chains, local mom and pop convenience stores, and even bowling alleys. He has achieved decisive wins at the Minnesota Supreme Court for taxpayers, including McNeilus Truck & Manufacturing and the Southern Minnesota Beet Sugar Cooperative. He has also negotiated large settlements for such notable companies as Hormel, United Health Group, Medtronic, Gander Mountain, Coborns, CVS, Walmart, and Walgreens.

While the primary focus of his firm is property tax law, Hill says that his successes in the tax arena made it possible for him to pick up the banner on public interest cases close to his heart. He has brought unexpected victories for his clients in matters from sexual discrimination and EEO retaliation to government whistleblower and anti-SLAPP protections. Outspoken, a maverick, a crusader, Hill has made it his life’s work to cause justice.

“After 33 years, all I know is it’s been one hell of a journey, but at the end of the day, I’m always proud of the fact that I haven’t wavered one jot from the attitude I adopted while in law school: That ‘Equal Justice Under Law’ rings hollow unless an advocate makes these four words real in people’s lives. I always saw myself as just such an advocate, which is why it never gets old to fight for underdogs no matter what the odds. It’s the very lifeblood of the law.”