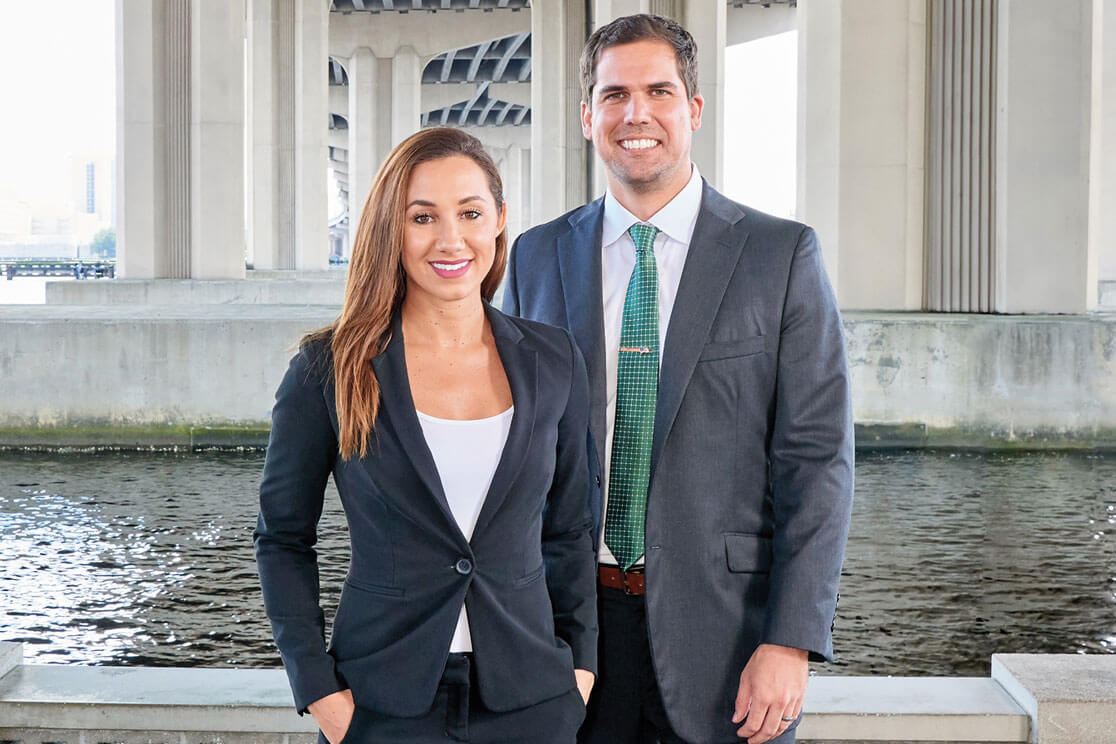 In a world that places incomparable value in auto-responders, form emails, and bots to answer questions and interact with clients, Robert Kirilloff and Jessica Jowers have created an environment with a fundamentally different approach: unparalleled focus on interpersonal attention and accessibility. Kirilloff Jowers P.A., a boutique personal injury firm based in Jacksonville, Florida, is built solidly on the foundation of creating the ideal attorney-client relationship, allowing clients direct access to their attorney working on their case.

Personal Injury is often an emotionally charged practice area where attorneys represent clients who have suffered catastrophic injuries and tragedy. Handling these cases requires a unique skillset. You must be able to walk the line between compassion and professionalism while providing an outlet for clients to tell their story. In this, both Kirilloff and Jowers are in complete agreement: the attorney – client relationship is paramount to providing the best representation.

Sharing an innate sense of devotion to pursuing justice on behalf of the victims of incomprehensible circumstances, Kirilloff and Jowers have made it their personal mission to give a voice to those seeking justice and accountability against large corporations with seemingly endless resources.

“We are committed to making a difference,” says Jessica Jowers, “to give those that need help a voice during the most difficult times of their lives.”

Both Kirilloff and Jowers attended the same law school but did not “officially” cross paths until late 2016. “I actually met Jessica at a networking event she organized for a mutual friend,” recalled Robert Kirilloff. “I opened my own firm in June 2015 and was ready to entertain the idea of expanding my practice. After speaking with Jessica and getting a feel for her views on personal injury law, we set the wheels in motion to form a joint practice.”

“I always thought that starting a firm would require a huge leap of faith.” says Jowers. “In some respects, it did take that leap of faith mentality, but I was excited and comforted knowing that Robert and I shared the same vision. We were so confident that it would work, and here we are almost two years later. It has been incredibly rewarding in so many ways.”

Becoming an attorney was always on his radar, but Jacksonville native Kirilloff took a circuitous route to his current profession. In fact, he started his undergrad years with an eye toward becoming a doctor and following in his Grandfather’s footsteps. That was quickly replaced with dreams of sports management, but his penchant for his legal studies coursework created an opportunity to pursue a career in law.

Crediting his Uncle Jeff Morrow as his inspiration to ultimately becoming an attorney, Kirilloff remembers the former personal injury attorney and Fourth Circuit Court Judge in Duval County as larger than life.

“Although he is no longer with us, Jeff’s presence can still be felt in legal circles today in a variety of ways.” says Kirilloff. “Jeff’s character and career still provide me with an instant boost in credibility from other, more seasoned attorneys.”

Jowers, on the other hand, grew up in Douglas, Georgia, a small town near the Florida-Georgia border. Unlike her partner Kirilloff, Jowers was only five-years-old when she decided when she that she wanted to become an attorney. In fact, her mother fondly says that she was “born an attorney.”

“Throughout my childhood, I witnessed both my parents serving our community,” says Jowers. “My dad was both a Justice of the Peace as well as a Battalion Chief at the local fire department. Seeing him act as a public servant provided the example that I wanted to emulate as I grew older. While I decided at a young age that I wanted to be an attorney, it wasn’t until I became a bit older that I truly understood that it was my calling to help people and I wanted to use law to that end.”

With a dual license to practice law in both Georgia and Florida, Jowers is still able to provide assistance to those in her old home town while also dedicating her practice to clients in her new home state. Because Interstate 95 runs down the coast and is sadly the location of many accidents, having the dual license has been a definite asset.

NOT JUST A TAGLINE

Both Kirilloff and Jowers spent years working their way up through the ranks of larger personal injury firms before, during, and after law school. During this time, they took note of what the larger firms were doing right and what they believed they could improve upon. The biggest eye-opener when working at the larger firms was that clients rarely had direct access to their attorney. That is why the client-attorney relationship has become the cornerstone of their firm’s model. “Without truly connecting with your client and understanding the toll their injuries have taken on every aspect – large and small – of their lives, it’s impossible to provide the level of service that they deserve,” says Kirilloff.

As a streamlined firm, with Kirilloff and Jowers personally handling every case that comes through the door, clients are immediately introduced to the attorneys that will be part of their lives for potentially years ahead. Both partners sit in on all client intakes and combine their talent to map out the best route to recovery, peace of mind, and justice.

When it comes to eliciting the support of an investigator to gather the facts of a case, many larger firms just go ahead and take care of the job without including the client in the process. At Kirilloff Jowers, they take it a step further.

“We want the clients to feel like they’re part of the entire process as their case moves forward,” says Jowers. “That’s why we spend as much time as it takes going over every step with them regarding the investigation. The tiniest details can make a monumental difference in these cases.”

“Personal Touch – Professional Results’ is not just a great tagline, it’s how we run our firm,” noted Kirilloff. “If we see a text, call, or email come through from a client, it doesn’t matter what we are doing, we try to answer as quickly as possible.”

“By the time that a client comes through our doors, they’ve been a part of an unfortunate event that may impact their lives for years,” says Jowers. “The least we can do is be someone they can count on. We have essentially based our firm around the Golden Rule.”

Although the duo have only been partners for a short time, their dedication to providing this unparalleled personal attention to their clients is not going unnoticed. Garnering multiple AVVO awards for client satisfaction, both Kirilloff and Jowers are gaining a solid reputation in the area of personal injury.

So, where does the paradox come in? Keeping the firm’s values intact while controlling growth is the number one priority for both Kirilloff and Jowers.

“As we grow, we will continue to keep our caseloads small enough to give our clients the personal attention they need and deserve,” says Kirilloff .

“We know it will always be difficult to compete in this market full of firms that spend a staggering amount of money on advertising,” says Jowers. “Our focus is quality over quantity; to give each of our clients our undivided attention.”

“Honestly, we love what we have been able to accomplish here,” says Kirilloff. “We enjoy working together and practicing the way we believe that personal injury cases should be handled: with open communication between clients and their attorneys.”